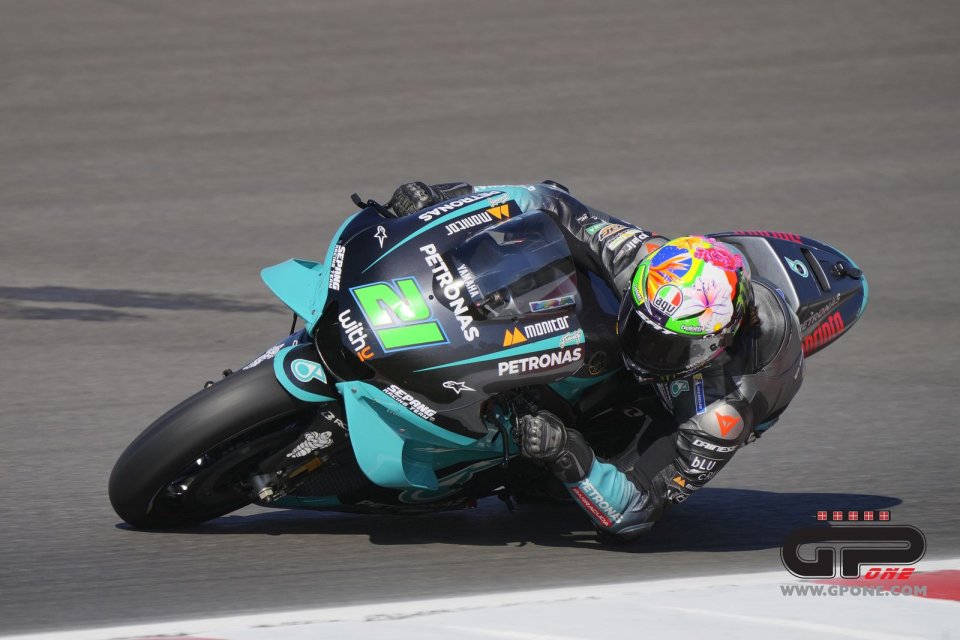 But is this really the case? Is the M1 the best bike on the track, the weapon that in the hands of a young, big-hearted and fast rider like Fabio can win this world championship hands down? 2020 taught us that this is not the case and it was simply the rider who made the fewest mistakes, not the fastest, and it was Joan Mir and his Suzuki who won.

Of course, Yamaha have started better this year, and apparently without any technical problems, but currently at the top of the championship there is a Ducati, that of Francesco Bagnaia and in the top six there are three bikes from Borgo Panigale with Zarco fifth and Miller sixth thanks to his win at Jerez.

From what we can conclude from the first races of the season, there is no doubt that the Ducati is the fastest bike, if not the most complete, while the Yamaha seems to be the most at ease on the various tracks, as confirmed by the performances of Franco Morbidelli.

So far the M1 has picked up three wins and a third place, while the Ducati has one victory, four seconds and a third to its name. On the other hand, Suzuki can only boast one third place. Numbers that could suggest that the fight for the title will be a Yamaha-Ducati affair. Will it be like this? Read carefully the opinion of Ramon Forcada, Frankie's chief engineer.

Forcada: "bikes with not much power are better off with a clear track"

“At the moment the fastest Yamaha in the corners, especially in the fast corners, is Fabio's - posted Ramon on Twitter - corner speed doesn't even depend on the tyres. Cornering is not entirely dependent on the tyres. The subject of riding is complicated, especially without data. Bikes without much power, and therefore without much acceleration, always do better with a clear track. If they ‘sacrifice’ their line, it will be difficult for them to make it back up in corner exit.”

What does that mean? It is simple: that the only strategy for Yamaha is to start from the front and make their own lines, without being disturbed (and therefore slowed down) by riders who do not have as much cornering speed, but who are difficult to overtake because they have better acceleration. Exactly what Quartararo was doing last Sunday in Jerez before he was slowed down by cramps in his forearm.

The problem (but also the solution) for Yamaha is therefore to get off to a good start. One thing that at the moment El Diablo succeeds in doing, but less so Vinales and Morbidelli, who is however disadvantaged by having a slower engine. And this would also apply to Valentino Rossi who, despite his (non) placings, sometimes manages to have not too bad a pace during the race.

Gigi Dall’Igna is well aware of the importance of starting at the front, which is why in recent seasons he has worked so hard on the 'holeshot' system, which Yamaha is unable to develop despite having tested it for more than a year.

The duel in the next Grands Prix will continue on the qualifying front, because in modern-day MotoGP, with the way things are ​​on the track, starting from the front is essential. Also because the progress made in aerodynamics, brakes and tyres allow shorter and shorter braking points, resulting in difficulties in overtaking. A problem that F1 knows very well.

The Yamaha is quick even in the short sections - where the Honda with Marquez on form seemed unbeatable - but then the Ducati recovers under acceleration, sometimes making any attempt to overtake futile, especially if the 'victim' is on a trajectory that allows him to get on the gas.

It is for this reason that Franco Morbidelli is struggling even more than his brand mates. But the situation, from an engine point of view, will not change this year so it will be necessary to see what solutions the technicians will find regarding the set-up.

Meanwhile, it must be said that, as in the golden years of F1, it will be necessary to rely on a 'qualifying' set-up, good enough to earn the best position at the start, as well as a race set-up.

The Soft tyre in the front provides riders with a very good feeling and also a strong grip on maximum angle. The Medium front tyre could also be a...
3 hours 17 min ago

At the exit of Turn 5, Miller was observed to be riding slow on line, disturbing rider #12 and causing a safety concern. Same punishment for Baltus...
4 hours 4 min ago

Only two FPs in Japan due to logistical difficulties, applies to all classes but MotoGP FP1 will be 75 minutes long
2 days 8 hours ago