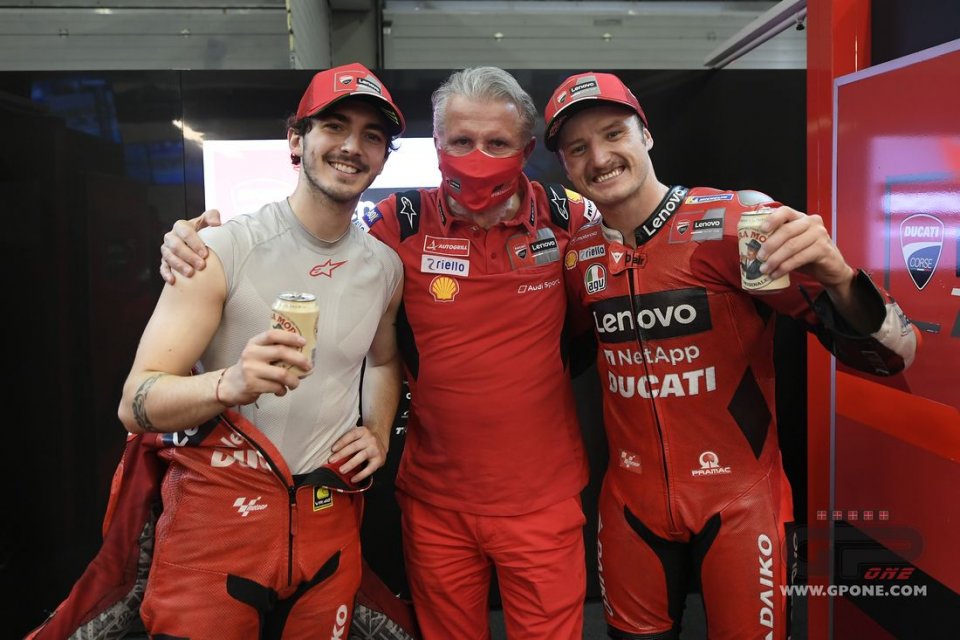 Sunday at Jerez wrote a new chapter in Ducati's history. The 1-2 victory of Miller and Bagnaia, with the latter leaping to the top of the MotoGP championship standings, was confirmation that spreading the cards around has worked. In Borgo Panigale they have found their present and also their future and Paolo Ciabatti, sporting director of the Reds, cannot hide his satisfaction.

"This result was a confirmation because we were convinced we could do well, but being 1st and 2nd was way beyond our expectations - admitted the Turin manager - Last year Bagnaia was 2nd before his engine problem and we had had a 3rd place with Dovizioso and a 4th with Miller, so it is a difficult track but not as much as a few years before. Doing a 1-2 at Jerez was a very pleasant surprise and confirms that we are working well, because since the beginning of the season our bikes have always been on the podium ”.

Seeing the celebrations in the garage, it seems that now there is a truly united atmosphere…

"Miller and Bagnaia get along well, they have esteem for each other, and this victory is important for many reasons. Not only because it is the first at Jerez for 15 years, but also because it is the first for Jack with the Ducati at a time when, by his own admission, he had entered a not very positive spiral. And also because Pecco proved to be a very fast, solid and lucid rider and we are leading the World Championship with him ”.

Did you have any doubts about Miller after the first few races?

"For our part, there has never been any doubt because we think he is a very talented rider. Furthermore, like so many riders who had compartment syndrome problems at Jerez, including Quartararo who otherwise would have been a very difficult opponent to beat, Jack had it in Qatar and his results had been determined by this. In Portimao he was not at 100%, he had only had an operation 8 days before, and that crash had put him in a difficult situation, after some excellent winter tests. He himself had put himself in a situation that could have been very negative and this victory, in addition to rewarding his work, has brought him out of this spiral, which could have had negative effects”.

Miller thanked you after the race…

“We have always had confidence in him, we have done everything we could to make him feel supported. We didn’t start this adventure together as we and he expected, but we knew it would only be a matter of time. On Sunday he won and removed a big weight off his shoulders, but above all one that he had put on himself ”.

Bagnaia is leading the championship, can it be said that now things start to become difficult for him?

“I believe that Pecco, in addition to having a great talent, has on his part a lucidity, a coldness in evaluating situations and managing the races, which will not make him feel this pressure too much. As he said, it is better now not to think too much about the championship or you can start going slow. Being first is important for him and for us, but there are still 14 races left on the calendar, so we have to keep our feet on the ground and build the championship race after race. Now we will go to two circuits that are quite favourable on paper, even though I am sure that Fabio will be very strong at Le Mans, and not only him. Then it’s Mugello, we must try to maximize all the possibilities we have without making mistakes. In Barcelona we have done well in the past, but we know that every year there is less and less grip and it is a situation that causes problems for us, the tests on Monday also served to try solutions to improve our competitiveness in those conditions."

These will be three chances for Bagnaia to score a first win, do you think that would allow him to take another step forward?

“This is his third season, Mir won the World Championship in his second year, and I think Pecco already had the pace to win the second race at Misano last year, then he crashed. He is a very mature rider, it is clear that the first victory takes a weight off you but in his case it will only be a matter of time ”.

Is this new team made up of Miller and Bagnaia already a safe bet?

“I would say yes, because it was a difficult, courageous choice and even criticized by some. We thought it was the right time to do it and we had great confidence in the two riders, then it's only the results that tell you if the choice was right or not. I believe that the work that is being done at the moment, the approach that there is on the part of the riders and the whole team, the desire to continue improving demonstrate the spirit and enthusiasm we needed. "

Is this Ducati's strength at this moment?

“It is one of the strengths, together with the fact that the 2021 bike has been improved thanks to the continuous work done by our engineers led by Gigi, it is certainly a combination of two factors. We focused on some characteristics of the Desmosedici, such as the difficulty in turning, and today it is an extremely balanced bike. We will never have the cornering speed of the Yamaha, because it is a different project, but we have also improved that aspect. There is a great desire to do well together and enjoy this freshness that exists within the team ".

Is Miller's renewal for next year a foregone conclusion?

"He is a rider we want to stay with Ducati, on Sunday he proved to be a winning rider and we want winning riders".

Speaking of 2022, there are negotiations underway regarding the second independent team as well. What's the situation?

“I repeat that we would like to have 6 bikes, we would like it for many reasons, both to have the possibility of having 6 riders and to have more data. We are talking to both Gresini and VR46, I think a decision will be made by Mugello ”.

Any preferences for Ducati?

"Gresini Racing has always been a reality that has done things seriously, while VR46 started with winning projects in Moto3 and Moto2 and this year has set foot in MotoGP by making an agreement with Esponsorama. They are both solid realities and we will see how the discussion evolves ”.

Is entering 8 bikes a possibility?

“We have already done this in the recent past, when we had the Avintia and Aspar teams in addition to Pramac. It is certainly a major commitment, but if the conditions were right I think we could evaluate it ”.