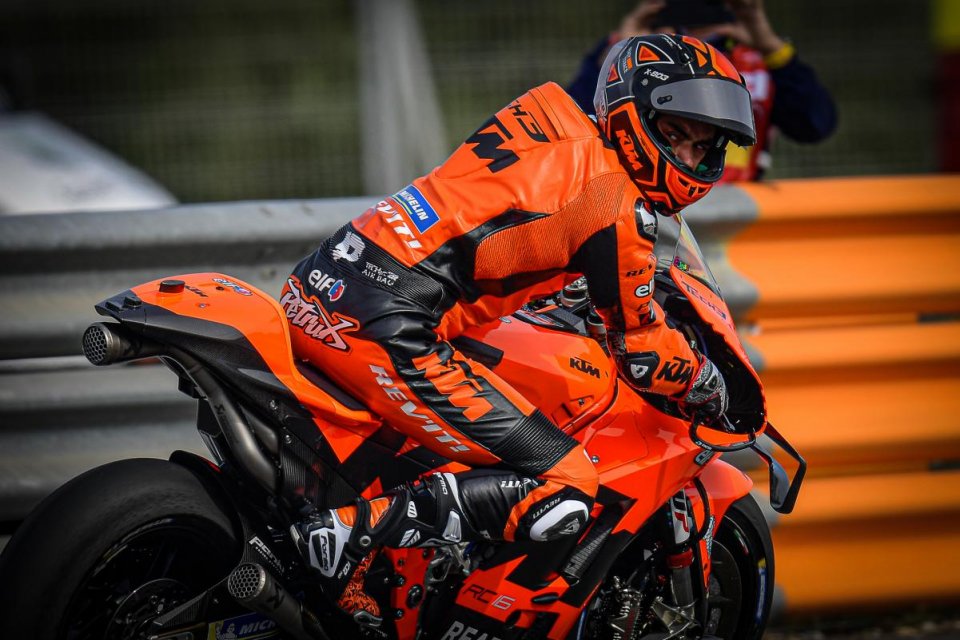 The Jerez tests left Danilo Petrucci with a bitter aftertaste, since he was forced to deal with a 19th time trial, more than a second and a half from the top. The KTM rider worked for a long time on the tires with the aim of finding the sensations he wanted, but it wasn’t that simple and obvious.

In fact, it’s difficult to say whether the glass is half full or half empty, even if he seems confident, in view of flying to Le Mans.

“Our goal was to find something that made the new rear tire work more,” Petrucci began. “In the past, I was much faster with new tires, unlike the used ones, but now it’s the exact opposite.”

Danilo gets to the crux of the matter.
“I’m working on improving, but I realized that I have to learn to do what the KTM tells me to and not what I want to. I manage to be strong when braking, even if I, unfortunately, work the front tire too much at the expense of the rear one. Unfortunately, I haven’t found a solution yet, even if, by moving more kilos to the front, there’s more pressure.”

So Petrucci can’t be particularly enthusiastic about how it went.
“I’m not completely satisfied. I wanted to do better in these tests. But I look to Le Mans with confidence. I expect more in France, since the track is different. Here, in Jerez, I managed to be close to Oliveira, but not to the other riders.”

His expectations were very different, but he has no intention of giving up.
“I haven’t tried anything new in these tests. We tried to be faster with the new tires. The fact is that I lose a lot in acceleration from a standstill. Compared to Binder, just to give you an example, there are 20 kilos of difference and I struggle, stressing the front too much, without having feedback from the rear. Unfortunately, I didn’t find what I liked on this Monday, even if, in Le Mans, it’s more important to slow the bike down rather than make it lean. So we’ll see what happens.”