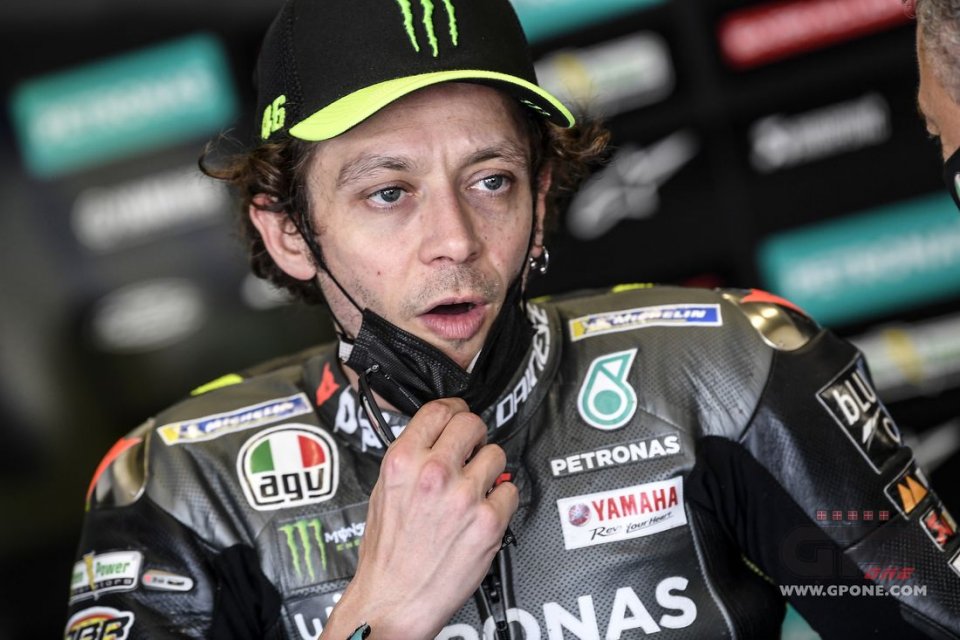 "It is still too early to say that I can see the light at the end of the tunnel, " said Valentino Rossi immediately, but this day of testing at Jerez seems to have done him some good. His face is not as dark as it has been recently, and from his words you can glimpse a cautious optimism – something that hadn't happened for some time.

"I was in desperate need to improve - he admitted - and this was a good day, because there were perfect conditions to ride the bike, I worked a lot and did a lot of laps."

But, above all, he has taken some steps forward…

"After a weekend like the past one, my morale and that of the team were very low, but today I was faster, things are going a little better, even on some occasions there were even some timid smiles," he said with gusto.

What is the progress due to?

“We worked well on setup, on weight distribution, and then Yamaha brought some new things that worked. All I tried today was a small step forward – was the Doctor's response - The goal was to be able to brake more deeply so that we could enter the corners faster and we took some steps forward. However, I know that it is always difficult to arrive at any conclusions in the Monday tests, where there are different conditions and you work in another way. I'm happy, because I improved my pace and managed to adapt the M1 to my riding style, but I'll have to confirm everything at Le Mans ”.

His problems are well known…

"I don't like talking about tyres, saying that they are too soft for me, because they are the same for everyone and if you want to race in MotoGP you have to adapt - he continued - I just don't feel comfortable on the bike, I suffer in acceleration, the problem is my speed. I knew that fighting for the win wasn't going to be easy, but I have to go faster than that. This is a job between me and the M1 and today I found something to improve, I was able to be more precise in riding ”.

Before leaving, Valentino also commented on the compartment syndrome problems that plagued several riders at Jerez.

"In my opinion, they are related to the increase in performance of the bikes, in acceleration but also in braking and here in Jerez you brake hard, so for those who suffer from it, it is a big problem", he commented.

The mood was also good on the other side of the Petronas garage and Morbidelli even had a couple of new parts to try. Nothing stratospheric, but at least it was a sign.

“I collected data for Yamaha on a new fender and tried a different carbon swingarm from the one I use - explained Franco - I don't know if I will use the latter at Le Mans because I only tested it at the end of the day, but it has some potential. For the rest, we worked on the setting to improve the braking and we succeeded. However, Monday's tests can be dangerous, you can take the wrong path, so we'll have to reconfirm everything at Le Mans ”.

After all, Morbido must do the best with what he has (a two-year-old M1) and perhaps it is the rider himself who has the greatest room for improvement.

“Only God can know this - he laughed - I think we can both improve, I'm doing my best and my bike is doing it too, because Ramon Forcada is sorting it out. As for the rest, I can't look too far ahead, I have a short view in this sense, I hope to go fast at Le Mans, then we'll see what happens in the other races ”.