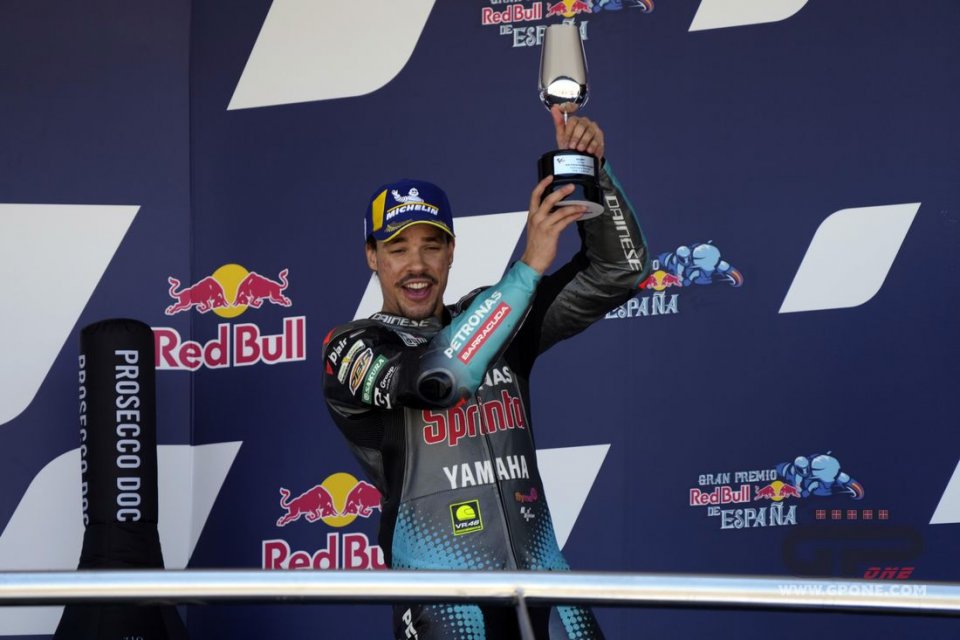 For Morbidelli, today’s podium has a different taste than usual: “it's sweet, very sweet” he smiles. Not only because it is the first of the year, but because it comes after a difficult period, in which the controversy over having a two-year old Yamaha was on everyone's lips. Franco showed once again that he deserves the same treatment as an official rider, but above all that he never gives up.

"Last year I won races and it was nice, but this season the difficulty coefficient has increased and getting on the podium has a greater value - he says - I work hard to do the best with what I have and when I can reach it. I'm happy. Today I have given everything and more, there were few braking situations where I was sure to stop ”.

What was the key to this weekend?

"We worked flawlessly and this morning Ramon (Forcada, his crew chief) pulled out his magic wand, made one last right change because there was less grip in the race. I managed to be consistent and very focused. You all know my situation, it is really difficult, but I am there ”.

Is Yamaha also aware of this?

"I spoke to Lin Jarvis and we were very frank with each other. He understands the way I feel, but we both came to the conclusion that it was just a matter of bad luck. My contract, Covid, everything has had an influence, I just hope that what fate has taken away from me will give it back to me in the future ".

Yet always very calm, despite everything.

“Actually I'm not that calm, I get angry and it happens quite often. But by my side I have Manu (Manuel Lucchetti, his assistant, ed.) and he acts as my punch ball (laughs). We have known each other for a long time and I let off steam with him, he knows how to take me. Also, at home, I have a lot of friends which allows me to relax ”.

After this podium, can you look to the next races with more optimism?

“I'm just trying to enjoy this moment, I don't think about the future. In MotoGP it is always difficult, today you can be at the top and tomorrow at the bottom ".

You had a good battle with Bagnaia…

“I tried to keep him behind for as long as possible, but when he passed me on the straight I hardly noticed, it was like being struck by lightning (laughs). I tried to stay with him and also to put some salt on his tail in the last laps, but I knew I didn't have the potential to pass him. "

Have you changed your riding style?

“Today I was able to exploit my strengths: braking and cornering speed. I also started braking with two fingers, because in some braking sections I couldn't squeeze the lever as I wanted. It wasn't easy at first, but then I got used to it ".