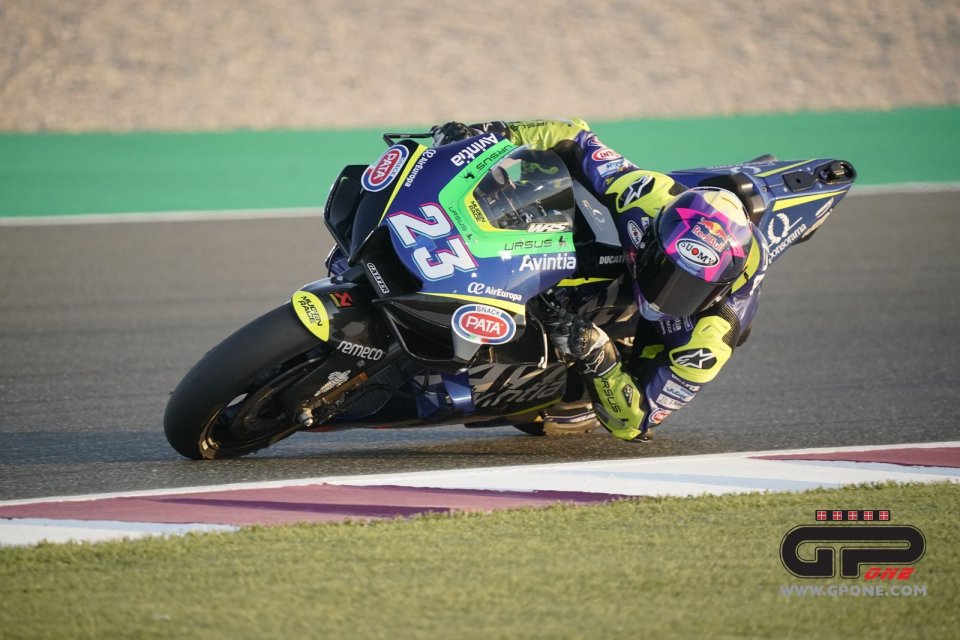 An 18th time – just over two tenths from the other rookie and teammate Luca Marini – doesn’t worry Enea Bastianini too much. At the end of the first day of testing, he appeared confident, although aware that there’s still a lot of work to be done.

How was today? Are you adapting to the new bike?
“It’s a great track for the MotoGP, with a lot of fast points, and the power of the bike is really good, but the result wasn't the best, and tomorrow we’ll have to work to improve.”

On what aspects do you think you need to improve?
“I have to improve, especially in the fast corners. I have difficulty with a loss of grip on the rear wheel, and there’s also work to be done on the weight of the bike to get a better balance, but it shouldn’t be difficult to fix these things for tomorrow’s qualifying.”

Even if the result was not really satisfactory, you surely have worked on other aspects. Were you able to familiarize yourself with the track, which is very different from those of Losail and Portimao?
“Yes, in some ways one could say that it’s a simpler track, but I still have a lot of distance from the leaders. As already mentioned, besides  the problem of adhesion on the rear, I still I can’t get the bike to go as well as I’d like, but I still enjoyed it, and I’ll try to do better tomorrow.”

Have you tried to analyze the data of other riders to better understand their strengths or to highlight the things you need to improve on?
“Yes, of course. I’ve compared my data with those of the other riders.  Besides not being able to have the speed I’d like in the corners, I can’t reach the curb or lift the bike at the right time. Overall, however, I was fairly aligned, so I’m not too worried.”

Zarco said that he suffers in slow corners and, instead, is strong in fast ones. So it’s the opposite for you?
“Yes. I suffer in the fast corners, especially in the last two. I saw that Bagnaia is the Ducati rider who did the fastest in that sector of the track, and I tried to take inspiration from him but, unfortunately, we’re in different garages, and it’s not easy, so we’ll also work on the bike set-up.”

Luca Marini said that, in his opinion, to go fast in the MotoGP, you have to brake hard a lot. What do you think? Do you agree with him?
"I don't agree. I braked well today, and I went pretty slow anyway. In my opinion, we need to make good use of the fast corners, especially today when it was windy and it was hard to push the bike."

What will be the tires for you to use in this race?
“For sure, tomorrow we’ll try the hard tire on the rear, which perhaps, at Portimao, could have been the best option for me, because I felt at ease in the final laps. We’ll certainly use the soft in qualifying but, in the race, it’ll be another matter.”