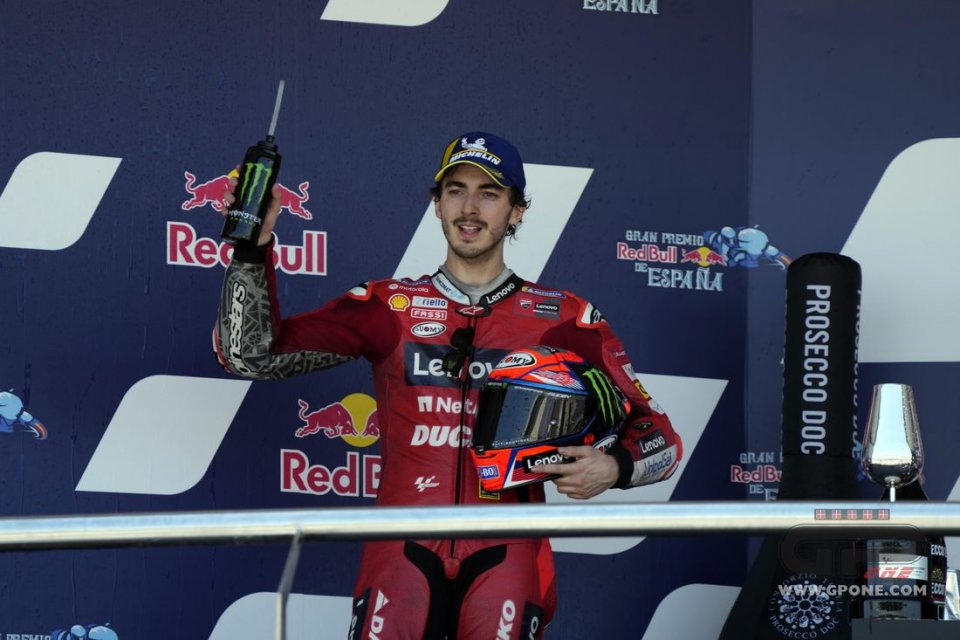 Today's 1-2 victory for Ducati is historic, something that hadn't happened since the 2018 Brno GP, and, if that weren't enough, it also hauled Bagnaia into first place in the championship. The rider from Piedmont is still missing a victory in MotoGP, but he has climbed the rankings with podiums and this is particularly special for him.

“This is a better second place than the one in Portimao - explained Pecco - There I had used the same bike as in Qatar and it went very well, while here in Jerez we had to work a lot. Today I had incredible sensations on the bike, but maybe I was a bit too calm in the first few laps. Up front they were keeping a pace that was quite at the limit and I preferred to keep a little margin so as not to wear out the tyres, then I started pushing after a few laps. "

Was there no way you could have won?

“I would have liked to, but today was obviously Jack's day and he deserved this win. I tried to go after him, but when there were 2 laps to go I was really at the limit with the front tyre, I had to slow down and risk as little as possible. However, it's nice to have scored a 1-2, it gives motivation, if all the races went like this I'd be happy. We have to stay focused, this was a tough track for Ducati, the next ones will be better for us ”.

Did you expect to be leading the championship after 4 races?

"In the winter I worked a lot, both on my body and on my mentality, but I didn't expect to start so well, I was aiming to be in the top 5".

"Of course I'm happy, but it just happened and it will take me some time to realize that I am the championship leader. We are only at the beginning, there are still 16 races left, and if I start thinking about the championship I will be slower. Today we were also lucky, because if Quartararo hadn't had any problems he would have won, he dominated the weekend. It is also true that to win the title you must also be lucky ”.

Do you feel ready to fight for this championship until the end?

“As I said, I worked to be able to stay more focused, my goal is to be as consistent as possible. Maybe if I had been in today's situation last year, I would have crashed, so I have taken a step forward. Now there will be circuits which are better for us and I have to think race by race, work to improve the bike. Right now I can't focus on the championship, but just think about having fun ”.

Will you celebrate with Miller tonight?

“I already know that a very difficult dinner will be waiting for me with Jack! I remember in 2019, in Australia, after his podium, when he was angry all evening because I didn't drink tequila (laughs) ”.

Bagnaia demands explanation from Michelin after being 3 seconds slower than in...