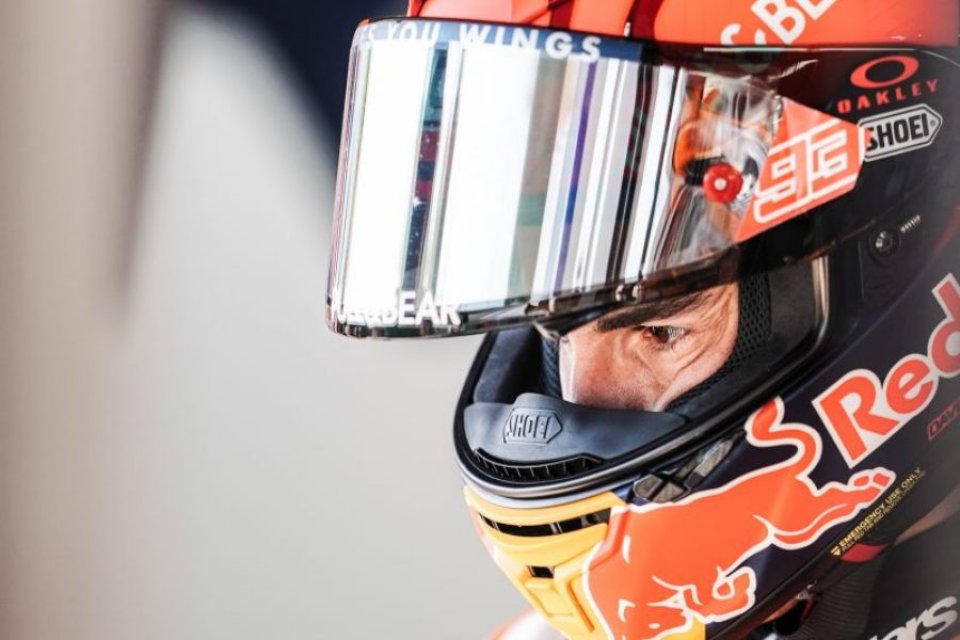 Everyone was a bit scared this morning, when at the end of FP3, Marc Marquez was involved in a terrible crash in turn 7, smashing into the airfences. Fortunately, all’s well that ends well, since the Spaniard then returned to the track in the afternoon to compete in FP4 and later qualifying.

It is a pity that the Honda rider was then unable to get through Q1, and now tomorrow he will start from 14th position on the grid.

“When you are on the bike you don't think about the risk, but only about pushing – the #93 began - today I tried to attack, but I ended up on the ground. It was a big crash the one in FP3, as I went into the airfences at high speed. In the end, however, if I am here it is thanks to the airfences. At the time, I didn't quite remember what had happened. I just tried to protect myself in the moment of the crash. It gave me time to think about picking up my arms, now I am weaker and I pick them up. And once your arms are protected, you wait to see where the speed takes you. Obviously, a fall like that, whether it's the first or the last, is scary, because you don't get used to falling like that and hitting a barrier. Coming out of a big accident unharmed, bruised but unharmed, and seeing that you crashed again and that nothing happened, at some point is a relief. "

Marc then went into detail about what happened.

“I went to the circuit hospital, they checked everything and I felt OK at that moment. Then I went to my motorhome but when I arrived there and sat down for ten minutes, I started to lose my head  and not know exactly where I was. Immediately I called the doctor and told him I had this feeling, and he told me we had to check in the hospital. When I arrived in the hospital I already felt well again, they checked everything, and when I arrived back at the circuit they rechecked it again. I was feeling OK, but immediately when I felt something wrong I called the doctor to be more safe.”

Too bad that his afternoon was then marked by the start, especially in view of Q1.

"After the accident I decided to use the soft tyre for qualifying, thinking about the risk and not about the performance. In the end it turned out to be a mistake. But I can say that today was the first time I started feeling the sensations I want on the bike and this is a positive aspect ”But we made a mistake because we chose a tyre more thinking about risk than performance. I saw immediately that the front tyre was the limit and when I stopped there wasn’t time to chance. It’s a little bit of a shame because I’ve felt good this weekend and today was the first day where I started to feel the bike again and was riding in a good way.”

The path that Marc Marquez is taking is certainly not easy, in fact it’s fraught with difficulties.

“We’re using a completely different bike from last year, and the bike I’m riding now needs less physical condition so that I can ride in a better way. I had a few moments this afternoon, but all of them were using the soft front tyre, not stopping the bike, not turning.”

The fact is that today's was the first crash that Marc has picked up since the accident last July right here in Jerez.

“Nobody wants to crash, but in the end we are riders and you know that sooner or later it happens, since we are always at the limit. In some ways this incident can be a relief, because you think about the strong impact you had, but also about the fact that you came out unscathed and this is the most important thing. At the moment I am not the Marc you all know, and neither am I going at 100%, but as you well know I want to be him again and to do so I will have to go to the limit and take risks. Precisely for this reason I am angry when I put the soft tyre instead of the hard one in the afternoon, as I played down performance. But this must not happen, in fact we need to change mentality".

“We all know very well that it is not possible to have 100% safe circuits, seeing as the MotoGP bikes are always faster and we go to the limit. Run-off areas have been discussed in the Safety Commission and there may be changes in the future. Every rider would like wider run-off areas, but this problem is not only for Jerez, but also for other circuits ”.