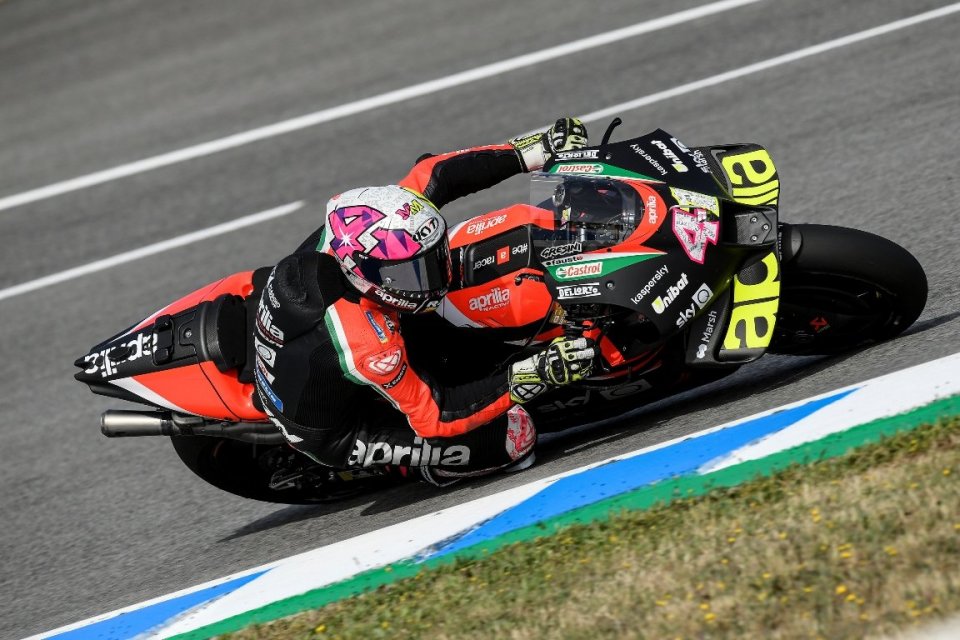 A somewhat troubled Saturday in Jerez for Aleix Espargarò, where he had to contend with two falls in the FP4, and then settle for an eighth time in qualifying. So Aprilia’s rider from Spain will have to start from the third row, preceded by Maverick Vinales’ Yamaha.

Despite Quartararo M1’s 330 thousandths, #41 seems to have the right confidence needed for Sunday’s race.

“Too bad for the two falls in a row,” Aleix began. “This morning, I was very competitive with the worn tires on the race pace while, in the afternoon, I made up for two falls. The first was my fault, since I lost the front and ended up falling, while, in the second, the tire was worn. But I’m satisfied, even if we struggle in qualifying, given that Aprilia’s limit is that of making the most of a new tire.”

But now he’s thinking about Sunday.
“The goal is to fight for the top five in the race, despite starting from the third row. I’ll have to try to gain some positions at the start, even if it won’t be easy, since I’ll have the Suzukis and Ducatis near me. In the front row, there’ll then be Morbidelli’s and Quartararos’s M1s, and I expect them to be fast. It’ll be a fun GP here at Jerez, and I’ll do everything, in order to have a good race and battle it out with Ducati and Suzuki.”

Safety was one of the main topics, since there are lots of questions after what we saw today.
“It seems that, in Jerez, we have to wait for someone to fall, in order to understand how dangerous the track is because of the ride-off areas. The barriers are very close to the track, and the MotoGP is getting faster and faster. We know this track well. I don’t think it’s new. Turn seven, just to give you an example, has airfences very close to the track. This issue was discussed in the Safety Commission, and I think there’ll be some changes to some corners next year.”

His last thoughts were about his health conditions after the double fall.
“I went to a mobile clinic for a check-up, since the handle fell on my arm, and I have a hematoma. Nothing serious though. I’m sorry not to be able to do a better qualifying, since I was aiming to be further ahead on the grid.”

Aleix Espargarò: “They drained a can-full of fluid from my arm.”