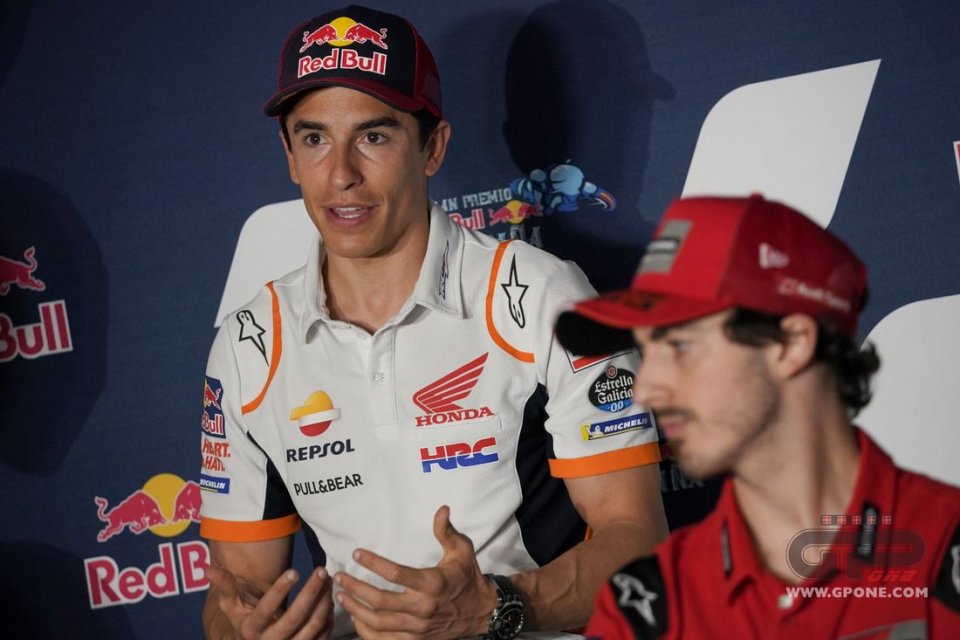 Can you already be old at 28? The answer, of course, is no, but you can be the oldest during a MotoGP press conference. This is what happened to Marquez in Jerez, when he found himself alongside Pedro Acosta, the 16-year-old baby phenomenon, and his colleagues in the premier class, all younger than Marc.

"There is a generational change, it’s normal, in sport as in life - commented the Spanish champion – A lot of young talents are arriving, but I am only 28, I still feel young and I have the motivation to continue and I want to learn from them. It wasn't easy to get back to racing after such a long time and I saw that some riders have changed their style and some bikes have improved a lot. I still feel competitive, but I know the day will come when we have to accept that there will be others better than me. When I no longer feel competitive enough to be able to win, then it will be better to stay at home, because I am here to win ”.

For sure that day is still far away and now Marquez has other thoughts on his mind. The most important is to be able to recover the best physical shape to express himself as he is capable of doing on the bike.

“From Portimao to here I just trained a little bit in the gym, just some cycling, but always taking it easy because already my body was asking for some relaxation after Portimao because one thing is the bone, the arm, the muscles. The other thing is I’m taking a lot of antibiotics still and it takes time to recover. It’s hard to feel like this at 28 years old, but I know soon we will move from the antibiotics and everything will come easier.”

Meanwhile, he took advantage of his free time to study his last race…

“I saw that my position on the bike is not the right one, especially in the right-hand corners - he admitted - In fact I was struggling a lot in the last two. I know it's hard to say, but these are my winter tests, I need kilometres on the bike ”.

And also to understand how the RC213V has changed in his absence.

“Honda is working on new things, but at the moment I feel that the limit is not the bike but my physical condition - said Marc - Here in Jerez I will start with a bike very similar to the one used in Portimao, then I will have to understand how I will feel. If I'm okay then I might try something new or make some comparisons with the old parts, otherwise I'll just lap. I know that Honda has been without a win for a long time, but they are doing everything to get back to the top as soon as possible ”.

Marquez also spoke about a hot topic these days: social networks. A subject that has been given a lot of coverage following Vinales' decision to delete his Twitter account after being the protagonist of a hoax.

“Social media are the present and the future, they can be very positive or negative. They allow you to be closer to your fans, but I hate that there can be fake accounts. In the end, I don't waste too much time on it, I have a person who works for me and warns me if there is something important. Since 2015 I have removed them from my life - he recalled the year of the clash with Valentino - Or rather: they are still there but I spend less time on them. I know that many people only follow MotoGP on social media, I like being able to have a special relationship with my fans. Of course, there are also haters, but I don't care ”.