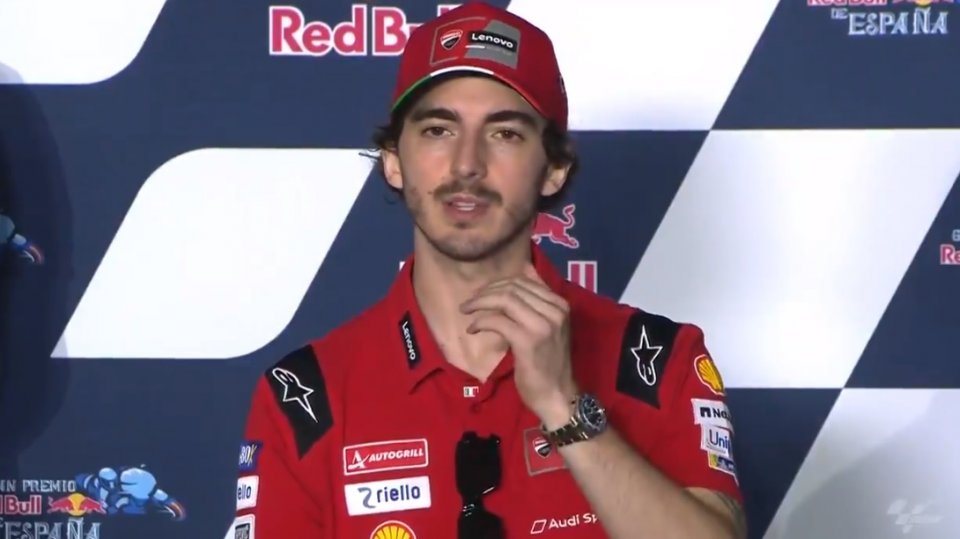 It is the Thursday press conference that raises the curtain on the Jerez weekend. MotoGP is back in action in Spain and as a result expectation is high to see everyone in action. All eyes are obviously focussed on Marc Marquez: "Here the situation is a bit more relaxed - began the #93 - there was a lot of anticipation at Portimao, while Jerez is a slightly more traditional race weekend. Physically I feel good, although during these weeks I have tried to remain stable on the physical side. In fact, I have no particular expectations, as my biggest limit at the moment is me and not the bike. However, I have been training during these weeks, despite my body asking for relaxation. In fact, I took several antibiotics, even though I know it takes time to recover ”.

In Spain, one of the main contenders for the victory is undoubtedly Pecco Bagnaia: "We are going to aim for the podium - commented the Italian rider - I know I can be competitive and I have everything I need to have a great weekend and try to win".

The focus then turned to his riding style, appreciated by several riders such as Spies: “I am pleased to read these comments - he continued - last year I started riding the Ducati with a different style than the other riders, but I found the confidence and speed. At the same time I would like to underline that it was difficult to accept the second half of 2020, as I was struggling and didn’t understand why”.

However, Pecco did not give up: "Working with the Academy guys during the winter gave me a lot of motivation, just like what happened in the past with Mahindra. That experience also gave me extra motivation to improve and do well. Once I adapt to the bike, I then focus on my riding style, which is similar to what I had in Moto2 and Moto3. In Losail, just to give an example, I worked on the tyres, while in Portimao I found a lot of confidence in braking and acceleration, especially in the slow corners and what I did seems to work”.

Pecco mentioned VR46, which can also boast Franco Morbidelli among its riders: “It is undoubtedly important to be back fighting with the best - Franco said - unfortunately it was not easy to start the season, but overcoming difficulties is part of the story of my life, as I've been through a lot. Valentino? You realize that there is a special aura around him and you can feel it in the box. He is also someone who yells a lot and it certainly does not go unnoticed (he smiles) when he talks to technicians and mechanics ”.

Fabio Quartararo was also present at the conference: "I will tackle this weekend with the usual approach - he said - I won in Portimao, but it is pointless to think about last year's victory, since we saw what happened to Oliveira in Portimao . Personally I feel good, I know I can be strong and fast here too, but first of all I will remain calm. Last year I was a bit lost mentally, while now the situation is different ".

Finally, it was the turn of Joan Mir: “To tell the truth, I don't know why I have never managed to win at Jerez - he said - I like the track, since I've always been competitive here. It won't be easy to make a difference, but I'll try to fight for the podium ”.