VR46, Valentino Rossi's team, will enter MotoGP next year and race in the premier class until 2026. The agreement has been signed and alongside it will have Saudi Aramco as Main Sponsor. The project came about through a collaboration with Tanal Entertainment Sport & Media, the holding company of His Royal Highness Prince Abdulaziz bin Abdullah Al Saud.

Tanal Entertainment Sport & Media, the holding company of HRH Prince Abdulaziz bin Abdullah Al Saud, is pleased to announce an important strategic agreement with VR46 Team, Valentino Rossi's company, for the near future of Moto GP. In 2022 the VR46 Team will debut in the MotoGP class together with Tanal Entertainment Sport & Media with Saudi Aramco, as the new Main Sponsor for the period 2022-2026: the new ARAMCO Racing Team VR46 will heat the track supported by other important sponsors of the world scene. 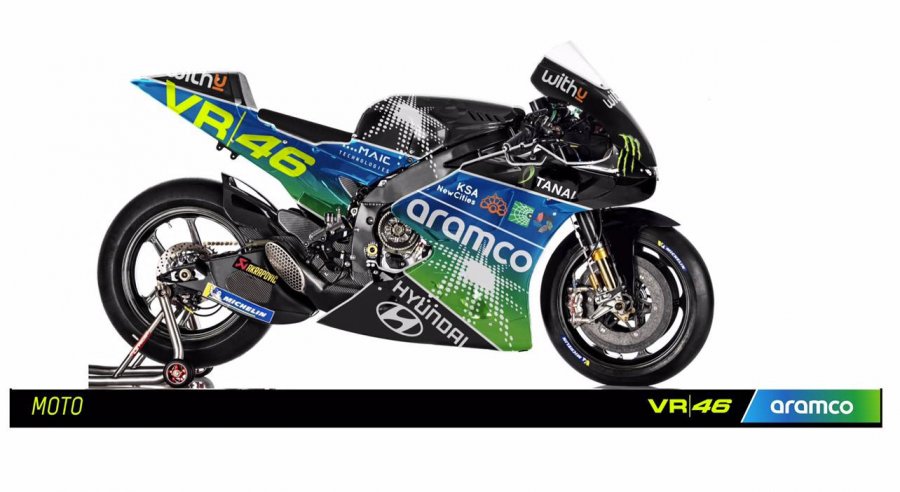 In addition to the traditional commercial promotion through the activity of the VR46 Team, a communication strategy will be aimed at promoting the programs related to the impressive Saudi Vision 2030 project. Based on the Vision 2030, Tanal Entertainment Sport & Media will present the new scenarios of future life that will be created in Saudi Arabia, starting with sports and entertainment infrastructures for the general public, up to involving large urban projects in the name of sustainability keeping in mind the green vocation that characterizes the KSA New Cities brand.

KSA New Cities is the brand that promotes Saudi Arabia' majestic new cities projects wich include NEOM and Najima The Fantastic City. Project developed with the support of the Korean KMHG team and the creative contribution of Italian and Saudi architects. New cities that will involve sport at the forefront with different forms of entertainment such as the creation of racing track for young drivers and new competitions. A communication dedicated to the various projects also in support of international industrial programs in the world of motosport, motorcycling and motoring, developed by His Royal Highness Prince Abdulaziz bin Abdullah Al Saud with MAIC Technologies.

Sponsor of VR46 Team and Team Bardahl VR46 Riders Academy MAIC Technologies role, is to develop and increment the production of road vehicles in Saudi Arabia.Also MAIC Technologies will produce the first prototype of a four-wheel drive off-road motorcycle with hybrid, thermal and electric propulsion, Joint by several partners from automotive Industry. The joint-venture with VR46 Team confirms its intentions to take the sporting project to the MotoGP class from 2022, maintaining its presence in the Moto2 class.

VR46 Team once again demonstrate its commitment and ability in promoting new talents showing its ambitious horizon.The brand Aramco as the team main sponsor, will accompany us in the sporting future new scenarios with ‘our’ shared ambitions and projects for years to come!

The Scottish rider is currently involved in the British SBK championship, in the past he has raced in the Rookies and Talent Cups and will make his...
2 sec ago

The Soft tyre in the front provides riders with a very good feeling and also a strong grip on maximum angle. The Medium front tyre could also be a...
15 hours 22 min ago

At the exit of Turn 5, Miller was observed to be riding slow on line, disturbing rider #12 and causing a safety concern. Same punishment for Baltus...
16 hours 9 min ago

The Stewards have decided to punish Franco for obstructing Bastianini in FP2, the Yamaha rider had already received a verbal warning at the...
1 day 16 hours ago