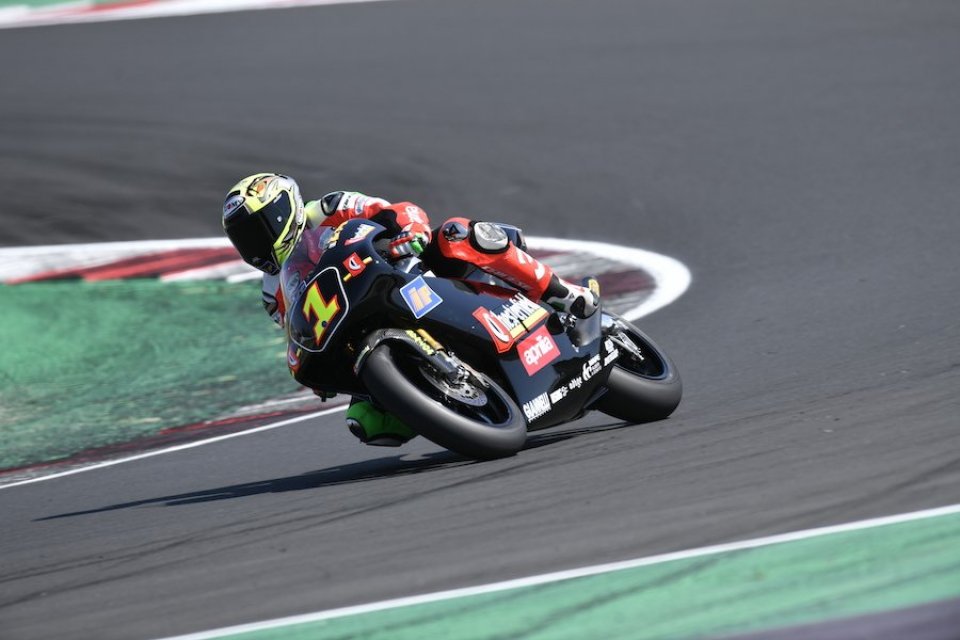 One of the protagonists of the Aprilia All Stars at Misano was Max Biaggi, representative and ambassador of the factory from Noale worldwide. During the weekend, the Corsaro was able to get back on the saddle of the RSV 250 with which he won three of his four world championships in the intermediate class, and, along with him, the various riders on the Romagna track had fun with those two-stroke bikes, including Aleix Espargarò, who defined it as the best bike he has ever ridden.

“It’s certainly really great,” Biaggi said. “But it’s best you just do a few laps without persevering too much with these relics. They’re bikes from twenty, thirty years ago that can do a few kilometers and, for Aprilia, it’s an important effort to let us try them, satisfying the riders who have never been able to ride them. We have to thank Aprilia, because it has finally started to have days like this, like the Aprilia tribe. Unfortunately, we didn’t have an audience, which would have been the added value.”

Instead, speaking of the MotoGP, how did you see Marc Marquez’s return to Portimao?
“Marquez made a crazy entry. An injured rider usually returns in progression, and he instead was fast from the start. Then, during the weekend, he struggled to improve, but a seventh place is a great result.”

What do you think of the start of the season for Valentino Rossi and his teammate Morbidelli?
“Rossi is in trouble. There’s little to say, because the others are doing really well with his bike, and it’s difficult to understand the reasons for this situation. I kind of feel bad for Morbidelli. He has a different and ‘older’ bike than the other Yamaha riders. He’s vice world champion, and I don’t understand why the meritocracy didn’t give him what he was entitled to. I’m not anyone’s fan, but I’m a sportsman, and I believe that he deserves something better.”

Who’s going to win the world championship?
“I haven’t thought about it,” he said laughing. “We need a few more races.”

"Made an appeal for the Superpole, Acosta? Two clues are proof”

Let’s talk about the world championship and especially the Moto3 regulation. Many have proposed a Superpole. What is the opinion of Biaggi and Max Racing Team?
“We’ve made an appeal for adopting the Superpole. On Saturday, I met with the top team managers, and we all agree. Now we need to understand if the project is feasible from a television and organizational point of view. We’ll see if Ezpeleta can make a change, even in 2022, but now there are too many problems and, like it is now, it’s not good for anyone. Now we need to put some common sense into action and match superpole with television times.”

Who did not suffer too much from the penalties received, since he won starting from the pit lane, is Pedro Acosta, the Spanish rookie at the head of the world championship. Did you already notice this from the tests?
“In the tests, you never pay too much attention to the rookies. The difference is noticeable in the race weekends. In Qatar, he rode an incredible race. He climbed with Romano, but then he had an incredible ease in overtaking. He deserved to win, and then confirmed himself in Portimao. Two clues are proof.”

What are your team’s goals for this season?
“Our goals are average to high. We reached a second place in the world championship at the team’s debut and with only one rider, doubling the efforts we expect. I’m not saying to win, but at least not be too far from that result. Now we’re suffering a bit, but I hope that something will snap in Romano, like what happened last year here in Misano. He needs to improve in overtaking.”