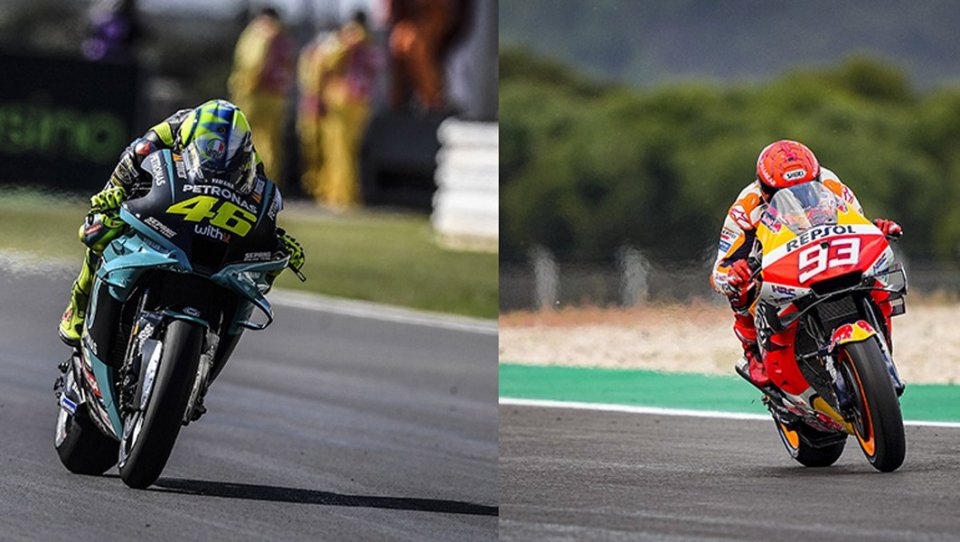 It was July 19th of last year when Marc Marquez fell in Jerez, fracturing the humerus of his right arm, an accident that meant staying off the track for nine months. The Sunday that followed, on that same circuit, Valentino Rossi climbed on the podium for the 235th time of  his career, the last to date. The track named after Angel Nieto witnessed the destinies of the two champions intersect in a very different manner and, next Sunday, it’ll be an important testing ground for both.

Marquez ended his abstinence from racing in Portimão, with a weekend that culminated in a liberating cry after a painful and fantastic race. “I felt like a MotoGP rider again,” he summed up his emotions. The Portuguese GP was only the first step towards a return to normality, which will still be long, but probably less than expected.

After Portimão, the doctors still forced Marc to rest, which meant no workouts on the bike and just a few days in the gym, without pushing it. The program is that of a step-by-step recovery, with the idea of not putting too much stress on his arm.

Necessary precautions aside, the Jerez weekend will be very important for Honda’s Spanish rider. There will certainly be an emotional component when he goes back to the “scene of the crime” but, like what as happens for any rider, that thought will cross his mind for a single moment, then his brain will switch to GP mode. Portimão was not only the return after a very long period of inactivity, but also a track where Marc had no references in the MotoGP, so much so that he practically used Bradl’s set-up for the entire weekend.

Jerez will be another story. Marquez had won the Spanish GP in 2018 and 2019, and he reached a speed last year that was unattainable for everyone else. So, even if he’s still not at his all time best, he’ll be able to really understand what his level is and also clear his head regarding the RC213V, a bike that has continued to evolve in his absence. If the Portuguese GP was  dominated by emotions, he’ll instead be using his head in the Spanish GP. Perhaps Marc isn’t in the best shape to win yet, but he managed to get within just thirteen seconds of the winner in a Grand Prix “in the dark”, so  he could still get close in a well-known one.

And Valentino? It’ll be different for him. Jerez represents his last good memory in the MotoGP, the emotions of the podium he’s been looking for in vain for months. Last July, he had ended with a Yamaha hat-trick, which was followed by convincing races in Brno, Austria, and Misano, before sinking into a whirlwind of falls, and then stopping after contracting Covid. From then on, there weren’t many sweet moments, including the start of this season, with the only qualifying in the first race in Qatar.

Recently, the Doctor declared that he’s fighting against time, in the sense of age, and it’s a battle that’s won against the clock. He had a glimmer of hope in Portimão, but it all ended in a fall. Valentino has always been strong (seven career victories) in Jerez, so he has to show that, at the age of forty-two, he’s still able to have his say. Also because Vinales and (above all) Quartararo, with his own bike, are making sparks, and the comparison for the moment is merciless.

Valentino seems to have quickly settled into the Petronas garage, the weather is good, but the results are still lacking. After Jerez, it’s the first of a series of tracks particularly favorable for Rossi and summer is approaching. If he wants to continue being a MotoGP rider again next year, he can only convince himself, and Yamaha, with results.

Rossi more optimistic for Jerez: "I have to return to the top positions...