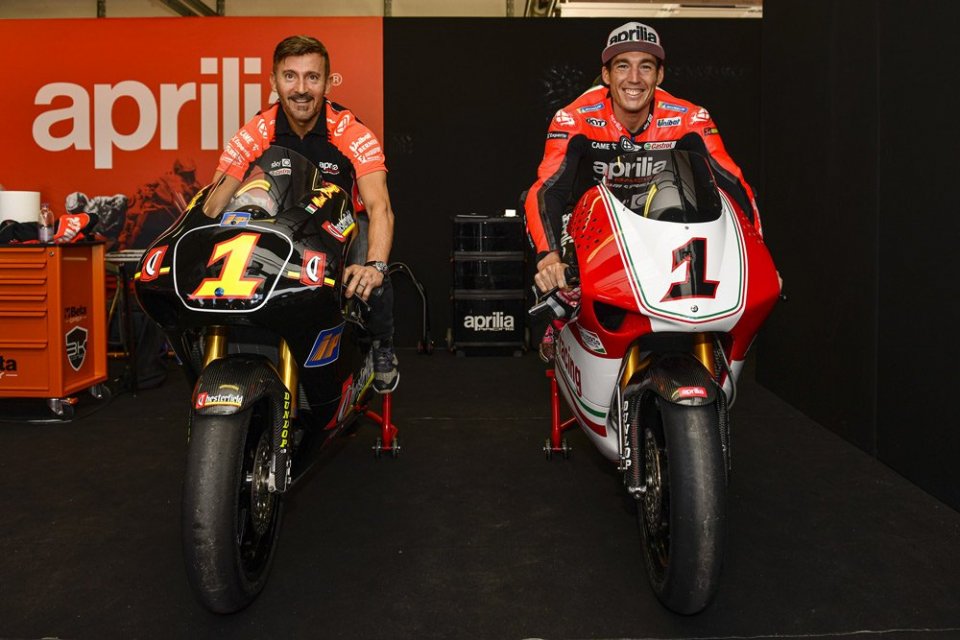 Let's be honest: yesterday in Misano, in the midst of the Aprilia All Stars day, the appointment for an interview with Aleix Espargarò was set for 14.50 but the Spaniard waited until 15:40. Just to be clear, rudeness (a defect that certainly does not belong to Espargarò) has nothing to do with it, because the wait was enjoyable and justified. Strange as it might seem, no one was able to separate Aleix from the 250cc machine that Aprilia allowed him to try together with Biaggi, little toys that really caught the attention of everyone present in a pit lane full of incredible bikes.

"For a rider a day like this is like going to Disneyland for a child - Aleix told us - Having all the bikes of an important manufacturer like Aprilia available on a world class track like Misano and being able to ride with riders like Biaggi, Poggiali, Capirossi is a lot of fun. For me it was a special day because riding a two-stroke 15 years after the last time was great. "

What can you tell us about this 250cc? What sensations did you feel in the saddle?

"I used the semi-official one, the LE, while I was able to ride the RSA, the last one. It is a truly incredible bike, three times stiffer than a MotoGP, it gives you a feeling of crazy freedom, it feels like being on a bicycle. The shifting is also really impressive, when you hear the engine reach 13,000 rpm ... wow ... there are few things in the world that give you goosebumps like this. "

So you would go back to riding those bikes tomorrow ...

"I am one of the luckiest people in the world because I can develop a MotoGP bike with a very large factory behind me but the best bike I've ever ridden is the RSV 250, and riding it today in the RSA version was great."

"Jerez will be a test, but Aprilia has really improved"

But today, as you said, you are a MotoGP rider. How did the start of the season go? Aprilia finally seems to have improved.

“I am very happy with this start of the season. I know it sounds bad to say but I haven't had much fun riding in the last few years. I tried to do my best but I wasn't smiling anymore, but this year it's quite the opposite: I'm happy and I can fight to be with the best, which is new for Aprilia. "

Where have the biggest improvements been made?

"The bike has improved a bit in everything. We don't have a much more powerful engine or a much better chassis than in the past, we have made progress in all areas. The engine is easier to use at low revs, the new frame allows me to have more mechanical grip and aerodynamically we have more downforce and this makes us accelerate much better. We have a competitive bike ”.

Now we come to Jerez, a track that tends to compact the group. What do you expect?

“After Qatar I had some doubts because that is a particular track. In Portimao, however, we confirmed everything and Jerez will be an important test because the track is very complete. This winter during practice I went very fast there and so I’m looking forward to the next race ".

In Jerez two weeks ago Andrea Dovizioso also tested the RS-GP. Did you get any feedback from that test?

“I had a meeting with all the engineers who went to Jerez with Dovizioso and he made comments similar to mine about the bike. It must be said that he spent a lot of time finding the right position on the bike, Savadori and I are tall and Dovi struggled a bit. For sure he will be ready for the Mugello test to try to take the bike to the limit ”.

But is the riding position really that important? We remember that one of the first to talk about it and to make a real problem with it was Lorenzo in Ducati ...

"Ours is the most competitive category in the world with the fastest riders in the world and every little detail counts because today if you are 3 or 4 tenths from the first you risk being out of the top 10. You cannot go to the limit if you are not comfortable on the bike even though I have always been a rider who tries to adapt to the bike rather than adapt the bike to me. Some riders, however, like Lorenzo who is really strong, prefer to do the opposite and he needs to adapt the bike to his own style and in fact we saw how fast he went with the Yamaha and how much he struggled with the Honda ”.

"Being part of this family makes me proud"

What is missing in order to win in MotoGP with the Aprilia?

“We are doing well, we must continue to improve continuously. We have all known each other for a long time and we need peace of mind to be able to fight for the victory. Now we need to find a little more power because our rivals are going stronger than us on the tracks with a long straight but we have never been so close to our rivals. I also need a bit of running in because it is the first time that I have the right weapons to fight ".

What do you think of Pol’s start to the season with Honda? Last year he was the happy one while you were suffering ... now things seem to have changed.

“Today's MotoGP is really great. Two months ago a lot of observers thought that Pol could win the world championship with the Honda and instead Aprilia and I are doing very well. This is just one example of the competitiveness of our championship. Pol and Honda will win races and I think he will also be able to arrive at fighting for the world championship ”.

On the track during the Aprilia All Stars we saw so many champions whose name is linked to the history of Aprilia. How good is it for you to be a part of this story?

“Max Biaggi is now a friend of mine, Capirossi has always been, Poggiali too and I remember how strong he was with the 125cc Gilera. I don't even have 1% of their wins and titles, but it makes me proud to be Aprilia's star in MotoGP. I am happy and pleased to be an Aprilia rider and to be part of this family ”.