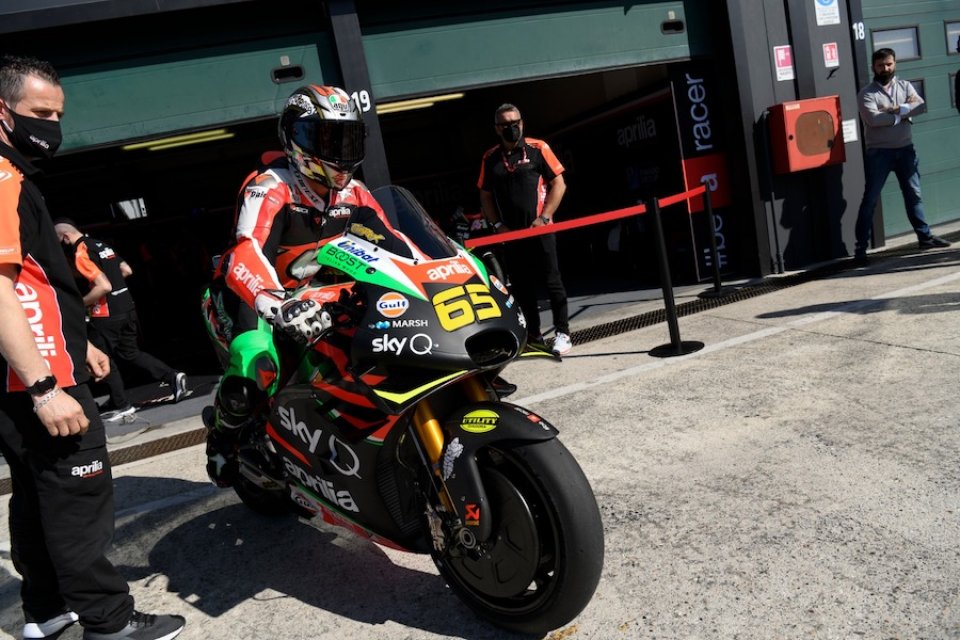 It’s a smiling Loris Capirossi who stepped off the MotoGP bike at the end of the All Stars Day organized by Aprilia at Misano. Over the weekend, in fact, the Noale manufacturer brought its range of super sports bikes (and more) to the Romagna track and organized a series of sessions in which to entertain the faces linked to their history.

"Days like this are like a playground for children and we are children - Capirossi told us still in his  leathers - I am no longer a kid but have the opportunity to spend a day like this trying a little bit all the Aprilia super sports bike range is really nice. The RSV4 is an awesome bike, then I played around a lot with the MotoGP bike which is really cool. Aprilia gave me the opportunity to do this, I will thank them for life and it won't be the last time I ride because there will be other occasions as well. Today I am a kid again ”.

What does a MotoGP bike convey in terms of sensations and how did you find the RS-GP that has performed so well in these first outings of the season?

“These bikes are the maximum expression of technology, it is a pleasure to ride them. I tried the 2019 and 2020 bikes and I must say that the 20 is a good step forward, the power delivery changes as well as the stability. The only problem was riding with stock tyres, which you can buy, they were excellent, of course, but perhaps not fully suited to this kind of bike ".

"Bagnaia's pole position? The rules are clear. No Superpole in Moto3"

Speaking of the world championship, in the last weekend in Portimao there was a lot of controversy about Pecco Bagnaia’s failure to get the pole. What do you think of that rule? Doesn’t it run the risk of taking away a bit of the show and also penalizes the riders? MotoGP qualifying doesn’t last very long, if you "catch" two yellow flags you risk starting at the bottom.

“If we analyze the MotoGP qualifying, we can see that it is not so common for a rider to crash in that session. Of course, it can happen and it happened in Portimao, but the regulation from that point of view is really clear and it was the riders who proposed this rule and we have adopted it since last year. When a rider crashes there are marshals in the gravel too and if another one crashes in the same spot it can be really dangerous. In Portimao on Friday all the riders were happy with the positions of the illuminated panels, unfortunately at that point it may not be possible to see the flag”.

Still on the subject of the regulations, after the Qatar race Andrea Migno expressed a clear call for Superpole in Moto3 and Max Biaggi said in recent days that everyone is asking to adopt this solution in Moto3. Is it feasible or are there any impediments because of TV?

“The problem is that the program is very full on some weekends with the Red Bull Rookies Cup and the Asian Talent Cup and so it is really very difficult to think about doing a Superpole. We are trying to find a solution to do something, this year the stewards have been particularly severe with penalties but things do not seem to have changed. We’ll see how it goes, I think that if the riders continue to pick up penalties like this it means that they are really stupid ”.

Still on the subject of Moto3 and more generally about young talents. We have seen Pedro Acosta win on two occasions this season, is Spain definitely leaving us behind in terms of the future?

“There are a lot of phenomena around, but you have to find them. In recent years the Italian school has helped to create many champions, we are seeing it in MotoGP and Moto2. It has always been a spinning wheel, Spain certainly produces more talent than us at the moment but it must be said that Valentino was very good with young guys because with VR46 he gave everyone a good boost and is making some good young riders grow ”.

So Valentino Rossi with Aprilia for a satellite team in MotoGP in 2022 could be a good solution for everyone?

"No Indonesian GP in 2021. Marquez was almost heroic at Portimao"

How is the calendar situation evolving? Finland seems to be confirmed while for Indonesia we will have to wait a little longer. Right?

“The calendar is confirmed until the overseas rounds, we are currently evaluating those races and I think we might be able to do a good part of those too. Finland is a nice but narrow track and could cause a bit of trouble for MotoGP even if it will be a lot of fun for Moto2 and Moto3. It is a technical track with slow and fast climbs, descents and curves. The mixed section is slow but with a very long straight. We have been to Finland many times and due to the long winter they were a bit behind but now they should be in good shape. We were impressed with the work done at Mandalika, it's really great. If all goes well we can think of doing a test this season but not the actual race ”.

One last question about Marc Marquez's return. How did you see that in Portimao?

"I saw a really good Marquez, he was fantastic, almost heroic. We saw him suffer quite a bit in practice and perhaps no one would have expected a race like this, he found his pace after a few laps and rode a great race. I believe he will be part of the fight for the world championship ".