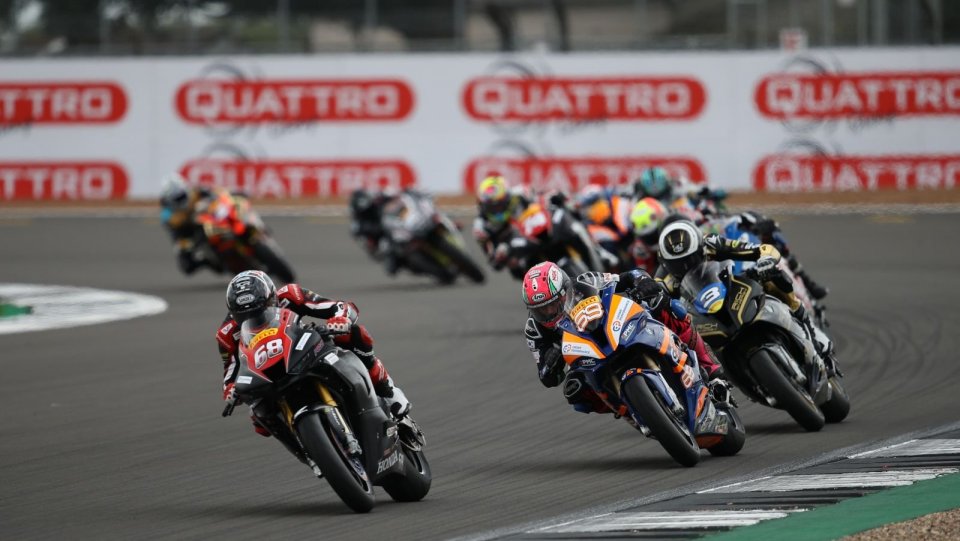 Having vanished from the international scene three years ago, in the UK the British SuperStock 1000 Championship is experiencing a second youth. Although indicated as a support category for BSB, every so often the Pirelli National SuperStock Championship has a very high level of riders, confirming the excellent state of health of the championship. While in 2020 the number of 30 participants has been largely exceeded, this season will even reach a total of 50 (!!) - 49 to be exact, representing six different manufacturers, totally mind-boggling and somewhat astounding numbers. In addition to the intriguing generational confrontation between British motorcycling talents, the main innovation of 2021 regards the opening up of the doors to 1100cc four-cylinder engines, but with some restrictions.

Changes to the regulations

Four-cylinder 1100cc bikes will now be allowed, albeit they will have to adopt a 'standard' MoTec control unit and without any electronic aids, along the same lines as the top class. In addition, they will be weighed down by four kilograms, with a minimum weight of 178 kg (compared to the 174 kg of 1000cc 4-cylinder bikes) and further limitations in terms of engine rpm. A thoughtful decision aimed at equating performance on the track, and avoiding their possible dominance.

In this sense, we will finally see the permanent debut of the RSV4 1100cc through the Incompetion/Aprilia Team (long linked to the Noale brand), which will field the former BSB rider Fraser Rogers (recently involved in the Moto2 World Championship on the NTS as a replacement for Barry Baltus) and Ben Luxton, reigning British SuperStock 600 champion. Added to whom are the 'privateers' Ben Broadway (Broadway Racing) and James East (Apto Aprilia).

Rouse hunting for an encore

With the number #1 plate on the fairing of his Ninja ZX-10R, after switching in the winter from Crowe Performance BMW to GR Motosport, Chrissy Rouse will try to defend the title he won last year. Tom Neave is also one of the favourites, confirmed under the banner of Honda Racing UK, 2020 runner-up and eager for revenge after a disappointing finale at Brands Hatch. Watch out for surprises, starting with Lewis Rollo (Royal Air Force Kawasaki and third in 2020), as well as the consolidated pairing of Billy McConnell-Rich Energy OMG Racing who will have the M1000RR, without forgetting Tim Neave (Buildbase Suzuki).

Welcome returns of riders and teams

In search of new stimuli due to various events, four class riders will find themselves lining up (again ..) in Stock 1000. After a negative period in BSB with SYNETIQ BMW by TAS, due to an injury in the pre-season, Taylor Mackenzie (Bathams BMW Motorrad) returns to the same place where he won the title in 2016 and to the outfit where he raced in 2018, this time aiming to get the best out of the latest model from the Bavarian manufacturer. The same goes for Alex Olsen, who dropped out of BSB and who has physically recovered well following the terrible accident at Silverstone last September, in Faye Ho's newly created FHO Racing BMW team.

Following a split from Morello Racing, Keith Farmer managed to find a lifeline in Platform Hire Racing. After acquiring the team of Steve Buckenham, the 2012 and 2018 champion of the category now aims to savour the taste of victory. Having concluded his relationship with DB Race Team prematurely, Luke Mossey will aim for the top in Bournemouth Kawasaki, something already done in part in the 2015-18 British Superbike four-year period before a disastrous crash at Thruxton. Akashi's benchmark team in BSB from 2017 to 2019, as well as 2018 champion thanks to Leon Haslam, last year it abandoned the circus to focus on Road Races. By virtue of the cancellation of most of the races, boss Pete Extance has changed his mind.

The conditions for an exciting season are all in place, not just in terms of the title. Suffice to say that, at the same time, the large majority of the aforementioned riders will be fighting for a place in 2022 British Superbike. The word now goes to the track, and the first tests on the Silverstone 'National' layout are scheduled for 28 April.