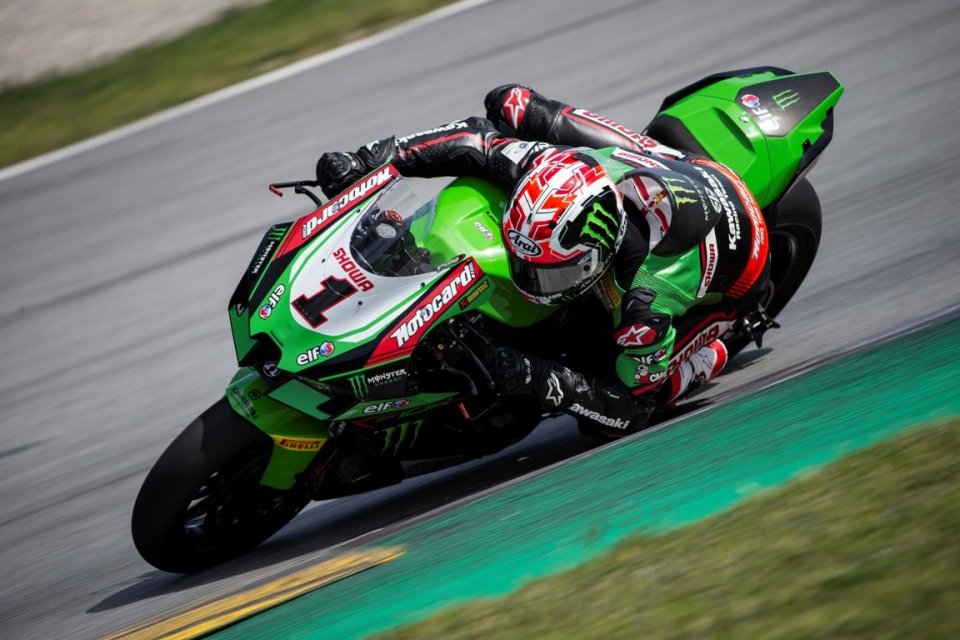 The Superbike and MotoGP on track in Aragon during the two days of testing scheduled between today and tomorrow. That’s right! A more unique than rare opportunity seeing the two categories together, so much so as to arouse a lot of curiosity among experts.

But it’s a shame that bad weather got in the way, complicating the day, even if it did improve in the afternoon. But Johnny Rea and the Kawasaki were still able to flex their muscles at the end of Wednesday at Motorland, putting everyone in line with a 1’49”338.
The Cannibal and the new ZX-10RR managed to precede Cal Crutchlow’s M1 by just over a tenth at the end of 65 laps. Yes, you read that correctly.

Instead, the Japanese manufacturer’s British test rider wasn’t able to go beyond a 1’49”460, and had to  settle for a second time. In third place, another Kawasaki, namely Alex Lowes’, delayed by only ten thousandths of a second compared to Cal’s Yamaha.

And speaking of the MotoGP, Dani Pedrosa with his KTM were also on track with 42 laps, the best with a time of 1’49”912, which allowed him a fourth place in front of Garrett Gerloff’s Yamaha R1 with a 1’50”557. We have to say that the GRT team’s American rider mainly worked on his pace, without seeking a time on the flying lap.

The same goes for Andrea Locatelli, who follows him in a sixth place, Nozane with the other GRT team’s R1, then Ponsson with Alstare’s Yamaha. They’ll be back on track again tomorrow for the second and final day of testing and will have to cross their fingers, since Thursday’s weather forecast in Aragon seems far from encouraging.

Below are the Motorland test times we were sent, since there’s no live timing service available.