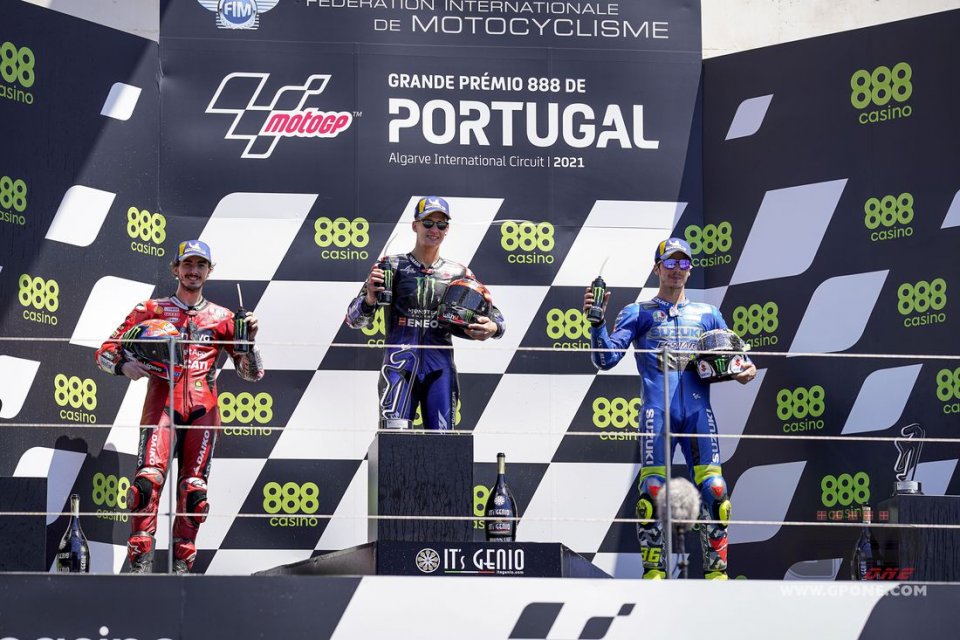 An unwritten rule states that a teammate is a rider’s first opponent. The reason is simple: when you have the same vehicle and are in the same structure, there's no excuse when you're getting a paycheck. In the case of an official team, however, beating the rider on the other side of the garage means being the leader for the company, number one on the team.

After the first three races, the balance of power in the various teams begins to take shape, but not always with predictable results.

In a way, Suzuki, with its world champion, might seem like the one with the clearest hierarchies. But it was also true that Rins had a difficult start to the season last year due to an injury, and that many consider Alex to be a more talented rider than Mir. Since there is no test to scientifically measure talent, you have to rely on results, and these say that Joan already has a podium and thirty-eight points in the rankings, while Rins has twenty-three and one zero.

Alex is a very fast rider, but still too prone to making mistakes, and Portimão only confirmed this, with a fall when he was in second place. The opposite of Joan, who makes constancy one of his strengths, which allows him to win the title a year ago. The world champion didn’t spare a dig at his teammate last Sunday: “Sometimes you have to do what the bike allows you to. Maybe Alex has gone over the limit.” So while Mir polishes his number one, Rins has to reflect on the mistakes he's made.

The situation was more fluid in Ducati. According to many, they should have been on Miller’s side, who instead they disappointed. After all, the Australian rider was the most experienced rider in the MotoGP, but the move to the factory team seems to have done him more harm than good, at least for now, unlike Bagnaia, who seems even more concentrated and empowered wearing the team colors.

For Pecco, however, the challenge wasn’t only with his garage mate, but also with Zarco who, with the Ducati Pramac, had obtained two second places in Qatar and the lead in the World Championship, before Portimão, where he threw everything away, or rather, in the gravel, right when the rider from Piedmont showed what he was made of: a record pole (like in Losail) annulled because of a yellow flag, a comeback as a rider as fast as it was burdensome, and a second place in the rankings, with six points more than Johann.

And what about Miller? The ranking says it all: fourteen points, which put him behind the rookies, Bastianini and Martin (the latter with one less race). But the Australian rider has some mitigating circumstances, considering the compartment syndrome that limited him in Qatar, yet the mistake in the Portuguese GP was simply uncalled for, like what had already happened in the past.

Last but not least, we need to talk about Yamaha. The factory team won the first three races, once with Vinales and two with Quartararo. Both were being scrutinized for their consistency and, if the French rider passed with flying colors, the Spanish rider plunged back into the usual abyss. Maverick is very fast, but the problem is that he doesn’t know half-measures: he either wins or fails. He was perfect in the first Losail race, then he disappeared in a teeter tottering of his recent results.

So Fabio has now become the point of reference in the pits and, above all, he seems to have learned from his mistakes. He evealed that he turned to a psychologist in the winter, and that he now feels calmer than he was a year ago when, after two races, he ended up in command of the World Championship. A lesson that Vinales should also learn, as he spent the winter extolling the climate inside the garage, only to stumble at his first difficulty.

After all, only three races have been archived. Too few to reach an unquestionable outcome, but those three on the podium already know who’s in charge in the garage.