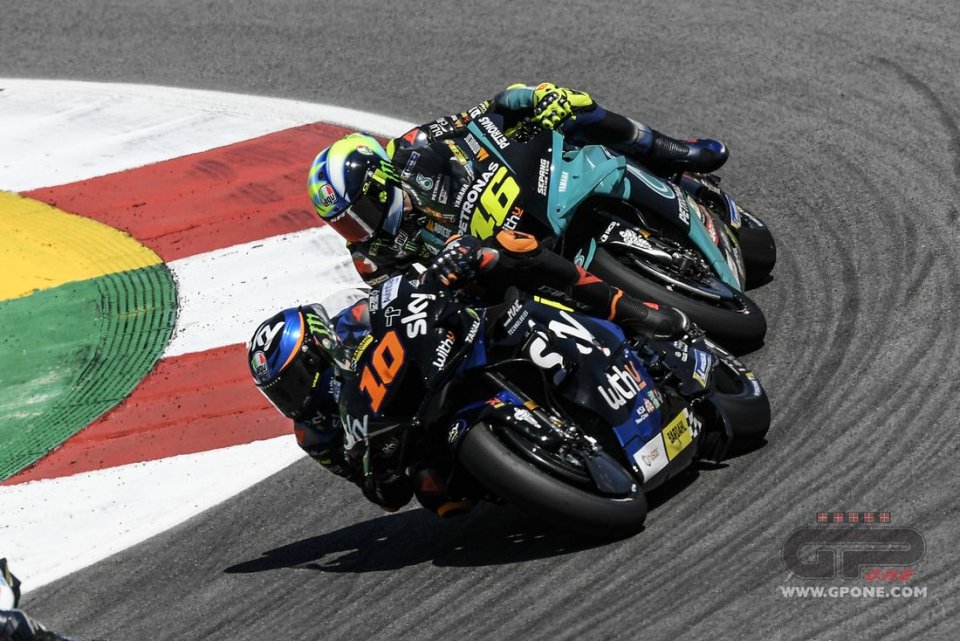 At the end of the GP that took place at the Portimão circuit, Luca Marini was four places lower than in qualifying, finishing 12th at the chequered flag. The Avintia Racing team rider from Pesaro crossed the finish line almost half-a-minute behind the first classified rider Fabio Quartararo.

“I'm not very satisfied - Luca said - I thought I could be faster, at least half a second. I can’t understand why, maybe due to the track conditions. I suffered a lot with the rear tyre and also with the front. It wasn’t easy, right from the start it was difficult for me to stay up with the others. I lost a few tenths in each lap and then the pace dropped a lot. We will have to compare the data because even in Qatar 2 my pace was very slow. I'm happy with the result of the weekend in general, the sensations with the bike have improved but for the race I can't be happy. It will be necessary to improve in this area because it’s not possible to be slower in the race than in FP4 ”.

What did you learn today?

“Something that I can't say and that MotoGP tyres are the key. You have to understand how they work and how to use them to make sure they work well throughout the race. I will have to concentrate on this and improve something on the bike to be even more comfortable ”.

Yesterday after qualifying you said it would be difficult to stay in the top 10 because the factory riders are all there, are you satisfied with the laps you managed to do at the start of the race?

“I wasn't riding well even at the beginning of the race, I was struggling a lot. During the other practice sessions I didn't struggle so much to keep up that pace. The leaders even took another step forward, they went half a second faster. I wasn’t able to and even had to lower my pace. It counts up to a certain point to have been there in front for half the race because the final result counts. It was a positive weekend overall. I am satisfied with the work done, we need to understand what happens in the race ”.

Did you manage to learn something from behind? Maybe even by watching your brother…

"Sure. When you follow riders of a certain level, you always understand a lot of things. Everyone has their own style but it's always nice to follow more experienced riders. It's difficult to replicate what a rider does with a different bike, it's more useful when I'm behind a Ducati because I can try to put into practice what I see from them. It's nice to be up front with the strongest riders. It was a fun race at the beginning, I would have preferred to stay with them until the end. "

You have raced on two different MotoGP tracks, now what do you expect for Jerez?

“Jerez will be interesting. Last year the Ducatis did well but in previous years they struggled. The potential of the bike is always very good and it is a track that we all know perfectly well, it is the track on which we have ridden most of all in our career. It will be interesting to experience it on a MotoGP bike. I'm very curious, everyone is strong and the gaps are minimal. It will be important to be precise and consistent to be able to do what I haven’t been able to do in these three races ”.

You and Enea have had two opposite races. He said he struggled more in the first part then he managed to get back up, but around lap 10 you had a drop. Have you already had a chance to look at the data? What was the difference compared to Bastianini?

"Yes, I took a quick look but in the next few days we will go into further detail in the meetings. Enea was going faster towards the end of the race, entering the corners faster and exiting better. Even in the two left-hand corners that are after the top of the hill he did them better than me. I lost a little in each lap, it was getting more and more difficult. One thing we both had was tremendous rear pumping and great movement from the bike. I suffered from it right from the start and in fact I had to use less power, with the full power map I couldn't ride. Enea was able to manage it better, after the first ten laps I was really struggling ”.