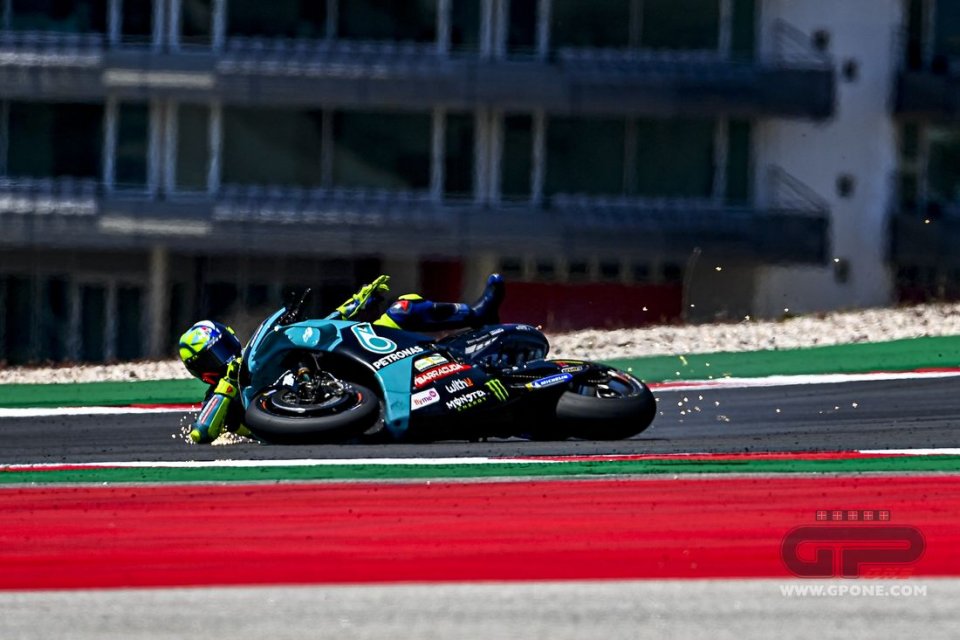 It may seem counterintuitive, but Valentino Rossi looks almost relieved after the fall in Portimão. Of course, he can’t rejoice in having finished his race in the gravel but, during those fourteen laps, he had some sensations in the saddle he had been anticipating for a long time. It’s too early to say that he’s seeing the light at the end of the tunnel, but at least there’s a glimmer.

“Today I felt better. We changed the set-up, and I was more effective in braking. Also, with the hard rear tire, I had more grip in acceleration,” he explained. “My pace wasn’t bad, but logically it’s difficult when you start from the rear. I think I could have finished in the top ten but, unfortunately, I lost the front between at turns ten and eleven. That’s a point where the tire is under a lot of stress on the right side. It was a shame, because I could’ve gotten some points that would have boosted my morale.”

Do you believe you’ve taken the right direction with those changes?
“I think so, even if it always depends a lot on the tires. In fact, using the hard today, I was able to be faster. After this race, I feel more confident.”

You were also battling it out with your brother.
“I had to be aggressive with him because I was faster, but I was struggling to overtake him. In fact, it took me a lap and a half and I lost time. It was a strange feeling to overtake a bike with the VR46 brand but, above all, Luca.”

Do you feel you’re in the most difficult moment of your career?
“I don’t know. Of course, everyone is going really fast, and it’s not easy to be in this situation, but today I felt better on the Yamaha, and I wasn’t too far from the group of riders who took the podium. This is why I say that the race has given me confidence. Also on paper, the next tracks are good for me, and I’ll try to be more competitive.”

Where do you need to start improving?
“Definitely from the qualifications.  I struggle a bit to improve my times with the soft tires. I have to try to start later. In the race, on the other hand, I rode quite well.”