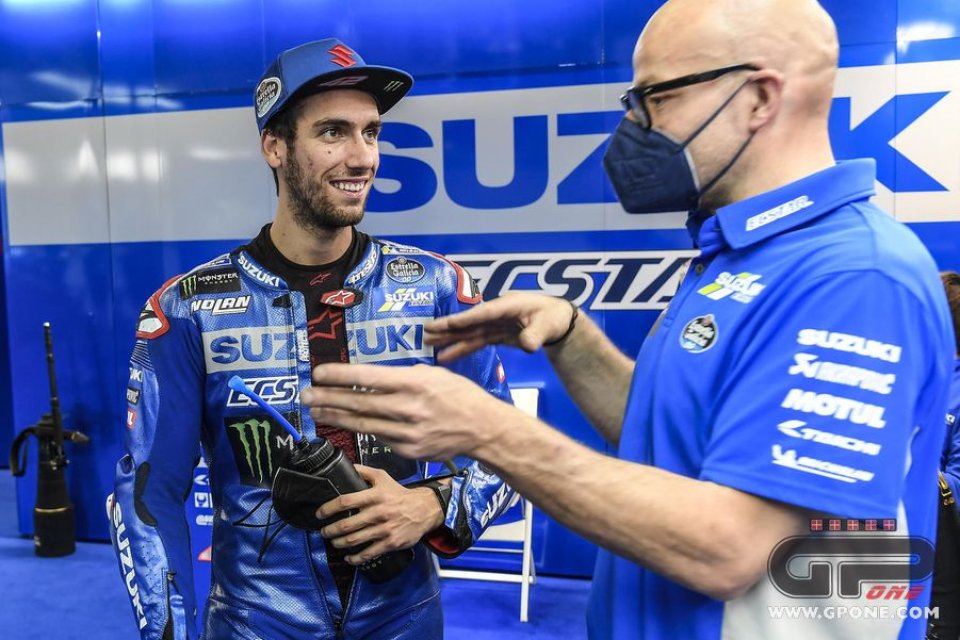 Today Alex Rins wasted a great opportunity. Seven laps from the end of the GP, the Suzuki rider fell while he was in second position fighting for the victory with Fabio Quartararo. But the Spanish rider sees the glass as half full: not satisfied with the final result, but very proud of the progress made compared to last year.

“The Portimão weekend went very well,” Rins said. “I 've been doing a good job since Friday. I entered the Q2 and took the front row in qualifying. I’m impressed with how the race went. I’ve improved a lot compared to last year,” he then added. “In the race, I was at the limit, and Fabio was really fast. But I must say that I was at a good, acceptable limit. Sometimes, in that situation, the bike moves a lot, rotates in every corner, and there’s no grip. I was at my limit today, but I felt good. I was able to check the tires and it was a great shame. I saw the data of the fall,  and I have to say that I didn’t do anything wrong with that corner. I braked in the same place and used the same pressure on the brakes. Sometimes it happens. I’m not happy, but I’m happy because of how it went in general during these days.”

You and Fabio had an incredible pace. He said you went really fast. The track record kept dropping lap after lap. Was this why you fell?
“Fabio is right. It seemed like I was pushing him. He demonstrated, both yesterday and in the warm up, that he has a great pace. The fall just happened. I didn’t have the same pace as him, but I felt good during the race. After the fall, I saw his times: 1’39”800 then 1’40”000. The tires have a limit. I don’t know if I would have been able to pass it. The victory would have been difficult. I lost twenty important points.”

You did a good qualifying yesterday and again today you went very fast in the race.
“Is that odd? I have been riding in MotoGP since 2017, I can say that, already from 2018, I was quite competitive. Then, in 2019 and 2020, I got strong. I think the work we’re doing is the same as always. I’m very happy with this weekend. Except for the fall, I was able to manage all the different situations that were on the track. I did the qualifying alone.”

There were many falls similar to yours today. What do you think?
“I don’t know. It's not easy to explain. Today I saw the warm up, and I thought it was very similar to Qatar. Lap after lap, the track got better and better. I’ve talked to Valentino before, and he said it was similar. I can’t say that the Michelins are not good, because I had a great pace. I was there with Fabio. Maybe the track conditions weren’t the best."