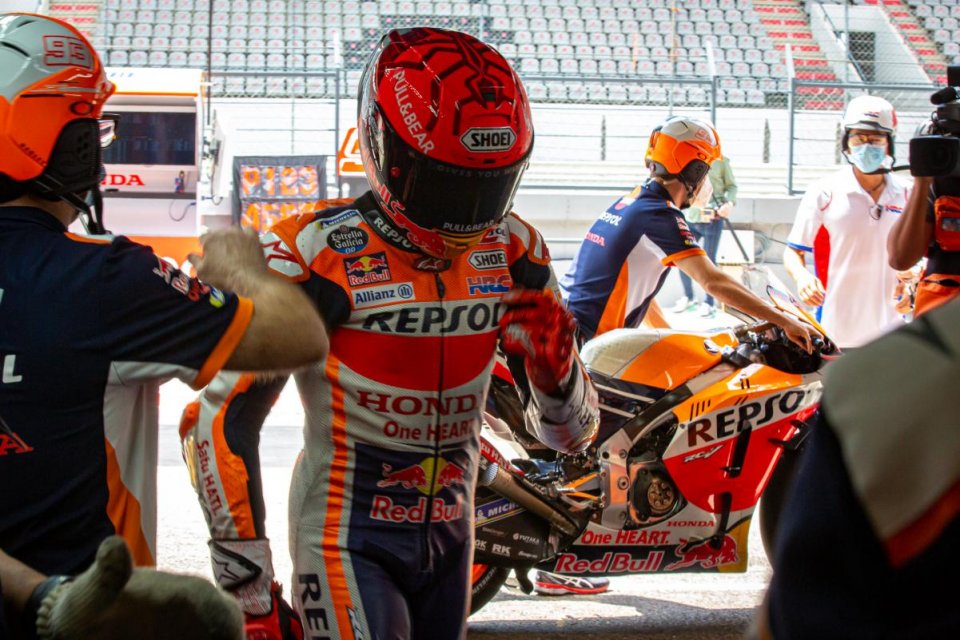 As soon as he was back in the garage, he received a round of applause from his mechanics, later one from his fans and enthusiasts on social media. And as if that weren't enough, during the post-race Zoom interview, the journalists present also broke out with a long applause for Marc Marquez.

Coming back nine months after that terrible injury in Jerez and finishing seventh 13 seconds behind the winner is something truly exceptional.

“I like to keep the emotions inside, but when I arrived in the box, with all my mechanics, I just exploded and couldn’t control the emotions. It’s been a very long time since I dreamed of today, to finish a MotoGP race. And this was the biggest step in my rehabilitation, my recovery. Those tears are for everything I've faced in this long period. I got back on the Honda and finished the race, all of which I considered as the biggest step when I got back to racing. For me it is a great relief, seeing as racing the GP was the biggest unknown and in the end I succeeded. "

Marc's attention then turned to the race.

“The hardest thing was the first laps, I was not in my place. I didn’t have the control of the bike, everybody started to overtake me. I cooled down, found my place and as soon as I found my place I started my race. But the most important thing was to finish the race. Then if we check, to finish the race only 13 seconds behind Quartararo, this is something that is incredible.”

Marc then went into further detail.

“It was difficult to understand where to brake, but also to follow the right line. The last 7 laps today I was not even able to touch the elbow. I was just riding in a really strange style. For me it was an unusual race, in which I had to accept being overtaken by the other riders. It was like being in school, when you play football, soccer, with the older guys. But on the other hand, this is my situation, since I am recovering from a major injury and I have to take one step at a time "

Marquez: "I'll cut back on training, I can't afford too much stress on the bone"

"The bone is ok, but the stress we can put on the bone must be progressive. It cannot be every day and every week. This is another reason why it will take more time to come back in a good physical condition. We already speak with doctors before this race. The comeback to the competition means that the training at home must be less. That means now from race-to-race I will not ride any bike. I will just train at the gym 3 or 4 days without a lot of weight. But I must follow the advice of the doctors because they give to me the opportunity to ride a MotoGP bike again. Then, in the future they might change, but the next check will be after Jerez ”.

Speaking of Jerez, the Andalusian round is the next one on the calendar.

“My recovery does not end at Jerez, it will go on. For sure Jerez is a track I know better than Portimao, where we have more benchmarks and where I have been strong in the past, so we will see what I will be able to do. Portimao was a tough track, one that puts the rider to the test. We saw what happened to Martin and my brother yesterday, after their crashes I avoided taking risks ”.

Marc has now left Portimao, the first real test, behind him…

"Before this race I had so many doubts and questions, plus there was a lot of curiosity on the part of the media. Many people wondered what I would be able to do. In the end, getting to the finish line is the thing that matters most to me. Personally, I didn't enjoy myself, at first I suffered, but then I found my path and followed it. As I have said on several occasions over the weekend, I was not interested in the final position. It was more important to get to the finish line and the sensations I felt once the race was over were different from any other GP I have competed in or won. Unfortunately I had to ride with a different style than usual, since if I had been the Marc I have always been, I would only have lasted three laps ”.

Finally, he had a comment about Pedro Acosta, protagonist in Moto3.

“He is a great rider, gifted with talent. When he won in Qatar I also tweeted about his victory. He certainly has everything it takes to improve and have a good career, arriving one day in MotoGP. But at the moment he just has to think about Moto3, staying focused race after race and continuing to work hard ”.