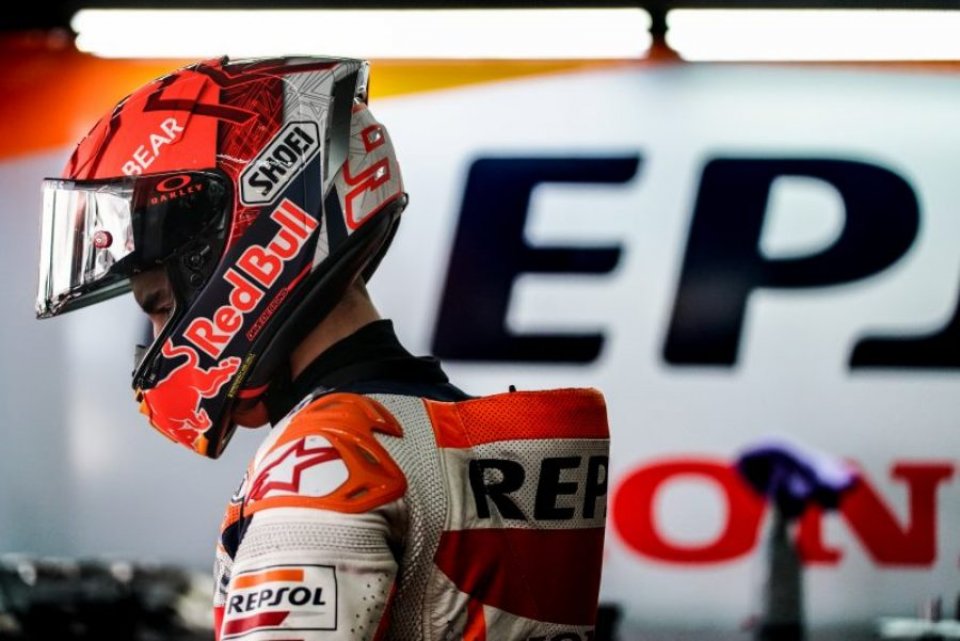 Marc Marquez is gritting his teeth, because he feels the pain. Faced with a sixth time trial in Saturday’s qualifying, we can only applaud the Honda rider’s performance, returning after nine months of absence.

Just seeing him on the track again is admirable, but he even tried to push, trying to keep up with the best, even though he’s still not at his best. Today, Marc went a step further, overcoming the stumbling block of the Q1 and hooking up to sixth place in qualifying, managing to put riders like Mir, Oliveira, and Vinales behind him.

The outcome could only be a positive one at the end of Saturday.

“Today I feel worse than yesterday,”  Marc began with a smile. “It’s a natural thing, which the doctors expected. I’m always in contact with them, to keep them informed about my health conditions. The important thing is that I have no bone pain, unlike perhaps my elbow, arm, and muscles. But I already know that it’s normal, since the musculature in my right arm is not like that of my left, so I struggle. But today was a tough day, where I tried to give it my all on three occasions: the first in the FP3, then in the Q1, and finally the Q2.”

With regard to the FP3, there’s something he dwelled on.
“I was frightened by my brother’s fall. That was one of the reasons why I didn’t improve in the FP3, since he was in a violent highside in front of me. So I decided to finish the lap and then think about the afternoon, without risking.”

Marc is obviously trying to tailor the Honda.
“Yesterday I started with Bradl’s base then, in this morning’s FP3, I started making some changes, in order to adapt the Honda to my style. I moved a step forward in the FP4 in terms of confidence proved to be important, but the question remains for the race.”

Yes, the race, or rather the fundamental event of the weekend.
“I already know that I’ll suffer,” Marc warned. “I honestly don’t know what’ll happen. There’s also a small chance that I’ll be forced to stop and consequently not finish the race. It would be a disappointment but, if necessary, I could return to the pits, also because winning four, five points more doesn’t change much. What I do know is that the race will put me to the test, and the more I try to push, the more I’ll have to deal with my body, because I’ll have to put strength into it. About that, tomorrow I won’t  have many laps in the warm up. I’ll only do a few laps to assess the bike and my sensations, in order to be ready for the race.”

However, Magic Marc’s physical condition remains the topic of the day.
“I already knew that today I would wake up in worse conditions than yesterday, and tomorrow it’ll be even more so. The important thing is that my bone is stable, and I don’t feel pain. I talk a lot with the doctors, and they ask me if I have to go so fast,” he said smiling, “since they don’t know this world well. I talked to my physiotherapist, Carlos, and I must say that the effort that the MotoGP requires is incomparable to what I put into the gym. I’m thinking, for example, of the use of fingers and forearms during braking.”

Despite the difficulties, a smile still remains on his face.
“I’m very happy to be sixth on the grid, even though we all know very well that Pecco would have been in pole and, consequently, I should have started further back. I honestly don’t know how I can be so fast and forward, even if that’s not my position. At the moment, I’m looking for the right sensations on the bike, since I feel I’m too stiff. But, in the end, nine months have passed since the last time I got on the MotoGP, and so that’s normal.”

Lastly, he talks about Joan Mir, who attacked him for obstructing him in the Q1.
“To tell you the truth, I rode all weekend alone. I don’t think I slowed Joan today, let alone put him in trouble. I could probably get out of the box and follow my brother, who wouldn’t have said anything, but I instead chose to join the world champion. I haven’t been riding for nine months. I needed to figure out a few things, and that’s what I did. In the past, many other riders have done the same with me. In the end, this is the MotoGP, and you have to earn a living in one way or another when you come back after a long time.”