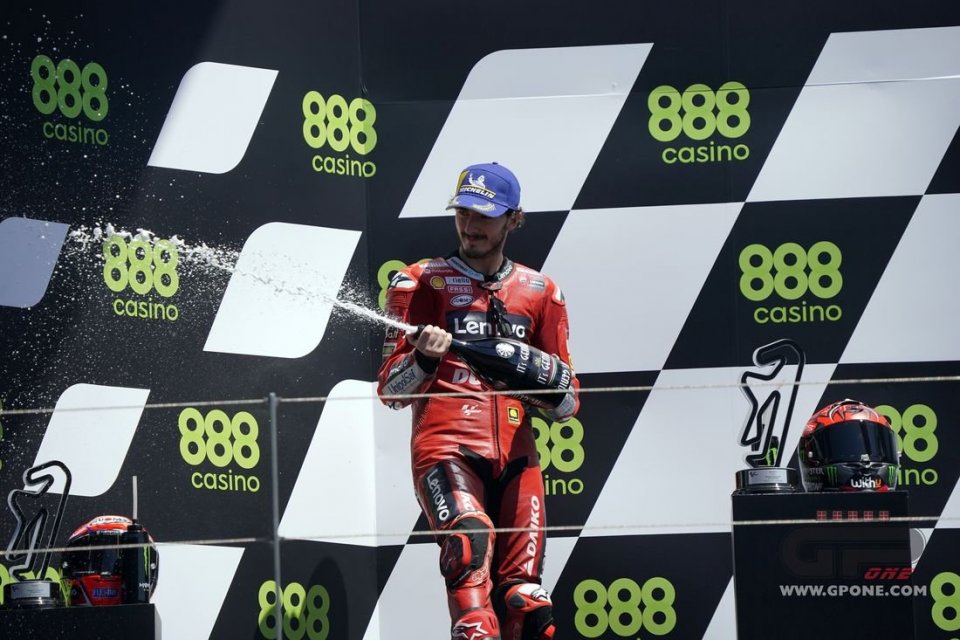 The Portimao race was an important test for Pecco Bagnaia and he passed it with flying colours. The Ducati rider knew he had the pace to win, but the yellow flag he picked up yesterday in qualifying put him in the ‘Bronx’ area on the grid. At that point he had to prove not only that he was fast but also mature. His second place proves that it was.

"This was the best possible result today - explained the Italian - Maybe even starting from pole position I wouldn’t have been able to beat Quartararo, but at least I would have had a chance; instead starting so far back I didn't have one".

However, he did manage to put together a very fast race…

“No one thought we could ride at that pace - he continued - there was a lot of grip and the tyres worked well. I'm happy with this podium, because I was in a difficult situation and it didn't help losing the front at the first corner. "

Even in the end, however, he could not rest easy, with Mir following him like a shadow…

"He was so close that I thought he was sitting on the rear seat - joked Bagnaia - But I knew it would be difficult for him to overtake me, especially at the last corner because the Ducati has better acceleration. I also did a perfect last lap ”.

After two podiums in three races Pecco is second in the championship.

"But it is too early to think about the classification - he explained - This year my goal was to be consistent and improve on the tracks where I struggled last season, and Portimao was one of them. I can say that I have taken a big step forward and I am happy with this second place. My first win? Now we will go to Jerez, Le Mans, Mugello, Barcelona, ​​they are all circuits that I like and maybe it will come. But now I just want to think about working as I did this weekend ".

However, the race was not exactly a walk in the park…

“The first 3 or 4 laps were difficult - he commented - I was fast, but braking with a full tank is not easy, in fact I risked bumping into Binder at the first corner. But my pace was good, I overtook a lot of riders and I got behind Zarco. Unfortunately in the last 2 laps I struggled with the rear tyre, but it's normal when you push so hard from the start. "

Finally, like Quartararo, not even Bagnaia was surprised by Marquez's performance.

"I knew he wouldn't have come back if he hadn’t been in good shape - Pecco said - I expected him to fight for the Top 10 like he did."