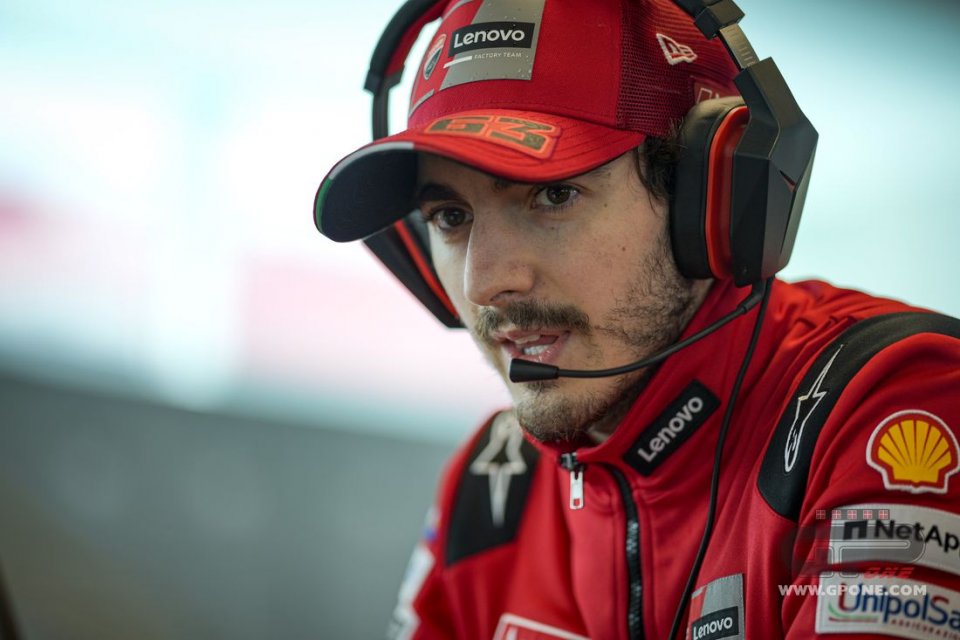 If bad luck exists, today it raged on Pecco Bagnaia. The Ducati rider from Piedmont had a perfect lap in qualifying, with a record time and a pole position in the bag, but he hadn’t come to terms with the yellow flags: the one that went up for Zarco’s fall  and then Mir’s, enough to cancel both of his two best times. The result was that the fastest rider in Portimão will start 11th in the fourth row tomorrow.

“The problem was the position in which the flag was displayed. It was impossible for me to see it,” he explained. “At that point, you’re clearing and leaning to the left to prepare for the next corner, but the flag is on the right. I talked to Marini, who was in front of me, and he hadn’t seen it  either. I know that when there’s a rule it must be respected.”

But?
“They annulled two laps in ten minutes, It would’ve been better if I stayed in the garage today and watched the others race.”

Do you think the rule needs to be changed?
“I’m the first to respect the rules. In fact, I had noticed the flags displayed for Martin’s and Zarco’s falls, and I slowed down, but in the corner where Oliveira fell, he couldn’t be seen. Unfortunately, these are things you always notice afterwards because, if I had seen them, I would’ve given up to make another attempt. I wouldn’t have made the pole, but a time to remain in the first two rows, yes.”

In certain cases, should they be more flexible?
“The details should be looked at. Let me explain. In qualifying, everyone pushes to the max, and it’s easy for falls to occur, but we only have fifteen minutes and four laps to set a good time. If you annul one, it becomes difficult to qualify well. I went to Race Direction to view the videos, and it’s clear that I couldn’t see the flag, and also that Oliveira and his bike were no longer in the ride-off area, so there was no risk. I don’t agree on how this rule is applied in qualifying.”

What do you expect from tomorrow’s race?
“I got the pole position with an incredible lap, and I have a very fast pace, so I’ll try to make up as many positions as possible, even if it’ll be difficult. In the FP4, only Quartararo was faster than me, but I had tires with twenty-five laps while his were new. Winning will be complicated, but I think I can aim for the top five.”

You need a a start like Martin’s in Qatar...
“I’ll try to copy him,” he said laughing. “I hope it’s a group race because it would be easier to recuperate, but I know there are three or four riders with a better pace than everyone else. I’ll try to recup four or five positions at the start, but the strategy will be different from the one I would've adopted starting from the front. I’ll have to push hard from the first to the last lap without being able to think about managing the tires. I just hope I don't finish them off in the last laps.”