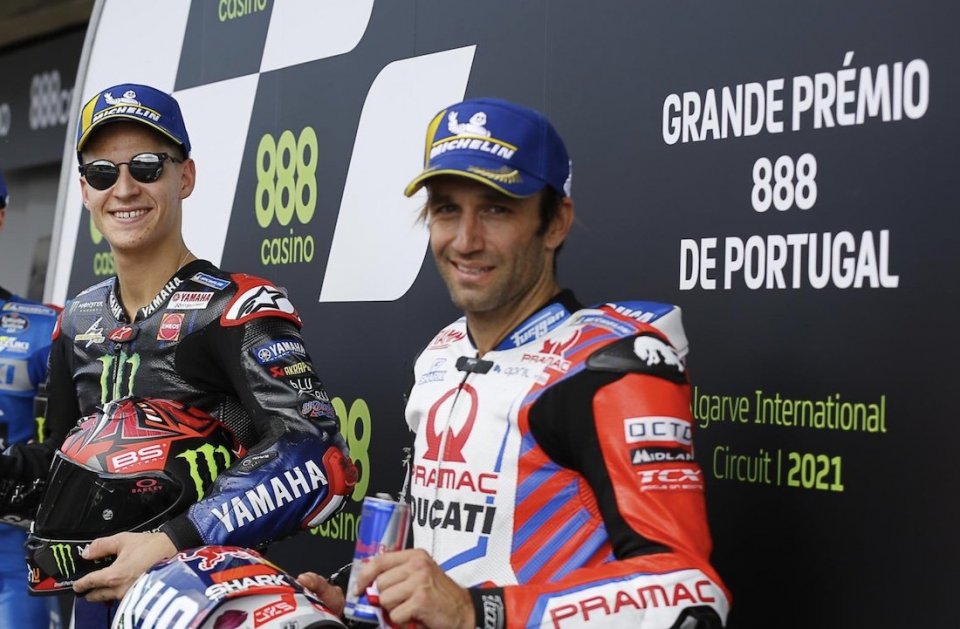 It is a really good moment for French motorcycling which in recent weeks is enjoying Johann Zarco who is first in the world championship and Fabio Quartararo who has already won a race and is only 4 points away from his fellow countryman. Today the two Frenchmen were again on top form with the Yamaha rider setting pole position and the Ducati rider in third place. It’s all looking pretty good for France…

"Fabio and I actually come from different schools than the French one: I from the Italian one and he from the Spanish one - said Zarco at the press conference - The fact that we are here together among the best in MotoGP is more and more often very nice and it is the demonstration that it is also possible for the French Federation to achieve very good results only by giving more access to these levels. We have the great examples of Spain and Italy, there are many strong riders of those countries ".

Today Zarco managed to interpret the Portimao track in the best possible way, even though the Ducati rider also suffered a crash. In addition to him, there have been a lot of crashes these two days, including one for Jorge Martin in which he picked up several fractures. Is Portimao a dangerous track?

“There are bumps and maybe in a few years we will need to resurface some corners but despite the lack of stability we are all improving our times compared to what we did in November. The crashes we have seen during this weekend are due precisely to this: we are faster than last year. As for Martin, I think his crash was due to the new tyres: on this track it is always an unknown factor to fit new tyres and you have to be careful when you push hard. As far as I'm concerned, the track is good, we have good grip and even if we got a bit of a scare I think there is nothing to say that this is a dangerous track ”.

As for Martin's crash, you were in the garage today and the images were broadcast. In a few minutes you had to go out for the last few attempts, what does a rider feel in these circumstances?

“I believe that when they show the images of the crash it means that the rider is OK. Obviously it is not easy for us to see certain things ”.

How did today's qualifying go and what do you expect from tomorrow's race?

"It's nice to be in the front row after that little crash. Luckily I went back to the garage and had time to calm down and breathe before taking the second bike and continuing to push. I took a good step forward and today I was surprised by the sensations I had with the rear tyre. Fabio is going really well and we will see what the pace will be tomorrow. I will have to do my race, trying to get a good start with the Ducati and try to stay in front for a few laps. I can keep up with Fabio and stay close to him ”.

VESevo: the mysterious Italian gun that communicates with the tires