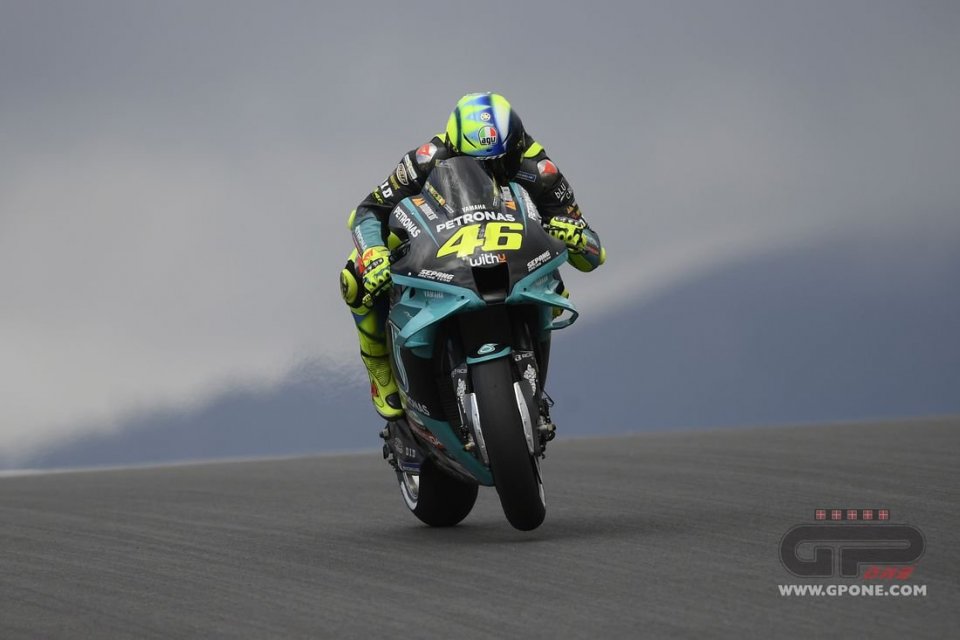 Valentino Rossi has to hope that all’s well isn’t what starts well, because the first day of testing in Portimão wasn’t really satisfying for him. A 15th time at 1”2’ from Bagnaia seems the reflection of a crisis from which he's struggling to find the way out. Like what already happened in Qatar, the factory team Yamahas are permanently in the upper part of the ranking ,while the Petronas ones are trudging below.

The Doctor tried to analyze the situation, making an effort to see the glass half full: “In the morning, we encountered difficult conditions, with the asphalt half wet and half dry but, in the end, my time wasn’t bad,” he explained. “The afternoon tests were more normal, and my pace wasn’t bad, but I had too many ups and downs, made mistakes, and found traffic. I wasn’t consistent enough.”

The worst came at the time attack: “I didn’t go really fast,” he admitted. "I tried to use the soft front tire, and I had trouble. My position isn’t great.”

Valentino had seen his arrival in Europe as the turning point.

“Let me clarify. I said that the tracks I know well would be in Europe, yet it’s not the time to think about the circuits but to ride well and gain confidence,” he emphasized. “Portimão wasn’t an easy GP for me last year, even though I managed to have some good laps in the race. Could it be better in Jerez? We need to think about tomorrow, not the next track.”

“This isn’t an easy track, but it applies to everyone. You need a stable bike here, especially when braking downhill, but these are details that aren’t upsetting,” he explained. “If anything, the grip wasn’t great today, the asphalt was dirty, but the situation will improve in the next few days. I’m already quite happy with my setup. I just have to improve in braking and then sort out my ideas on the tires.”

Rossi couldn’t help but answer a question about Marquez’s return, who he also had the opportunity to see closely on the track in the morning.

“I expected him to go fast, and he seems physically fit,” is his opinion. “I saw him riding a few corners, and he seemed to be as fast as before the injury, No doubt, he’s very competitive.”