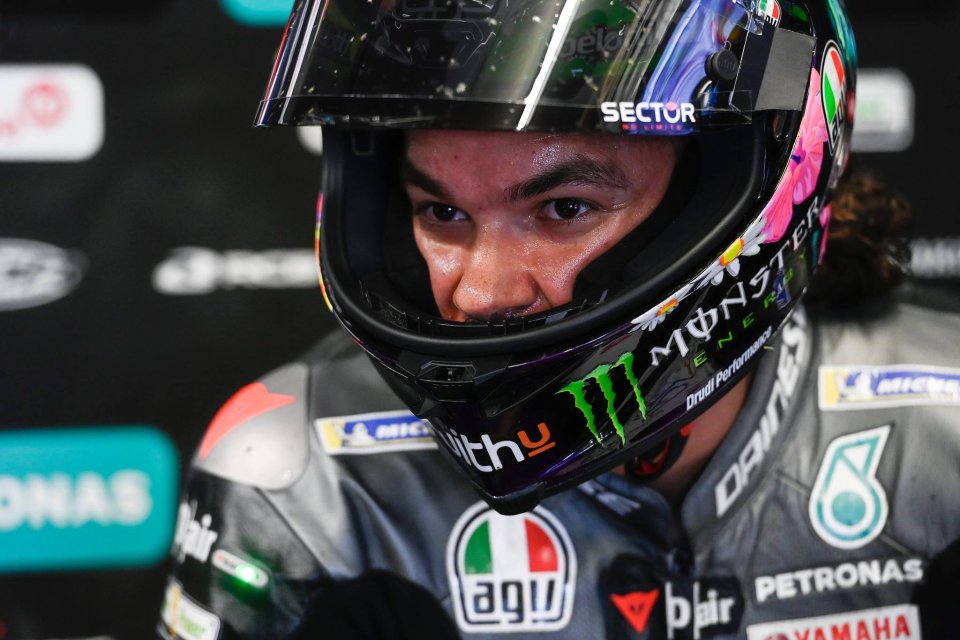 We know Franco Morbidelli well. He is a self-confident, cheerful, proactive guy, always with a smile on his face, clearly also thanks to his South American soul which has accompanied him since childhood. But clearly, in this 2021 season, for the moment there is very little to smile about… even if he tends to wear the mask.

In fact, there is no point beating about the bush: the treatment reserved to him by Yamaha, after his second place last year, just does not go down well. Franco is being forced to ride last year's bike, and he’s struggling to keep the pace of the top guys.

Today, at the end of qualifying, he was not able to hide his disappointment, while still keeping a smile on his face.

“This situation is making me itch and I can’t hide it - began the Italo-Brazilian - but I always try to stay focused on what I have to do, aiming to do the best with what I have. As for my future, VR46 will take care of that, but I will also do it together with Gianluca. I certainly want to secure the best future for myself, both technically and emotionally ”.

It’s a bit of a thorny issue, so much so that Franco is reluctant to go into more detail...

“At the moment it is too early to talk about this with the media. I want to stay focused on the present, since fantastic things come from difficulties, so I want to push to the limit with what we have, also because I have no alternatives. In fact, I have to work with what I have and give my all. Then it is clear that when I am calm I will think about the future ”.

Franco cuts the topic short, and attention shifts to qualifying, where he finished fifth 0.241s away from Quartararo.

“Here in Portimao it seems that we have managed to solve the problems of Qatar, without wanting too much to go into the merits of what happened in Losail. In fact, I preferred not to find out too much about the difficulties of the first two races ”.

Better then to think about Saturday in Portugal…

“I must be happy about this position in qualifying, especially because I found the sensations I wanted with the M1. In fact, I managed to be fast today, especially on the flying lap, where I had a lot of confidence. Obviously the sensations are not yet those of 2020, but personally I'm happy. We are in fact working with the team to come back as strong as last year and here in Portugal we have also made some changes to be fast. In FP4, just to give an example, I managed to be more competitive than in 2020. The problem is that the factory Ducati and Yamahas are very fast, as is the Suzuki ”.

He also found the time for a comment about the race…

“It's hard to overtake when you're 15km/h slower... For the race we will see what happens. Quartararo showed that he had the best pace in FP4, so I expect him to be competitive and fast. However, I will try to be strong and take a further step forward ”.

One final consideration was about Bagnaia’s cold shower, after the Italian’s pole position lap had been cancelled…

“Probably in that curve the panel was not placed in the ideal position to be seen. Yesterday maybe they talked about it in the Safety Commission, but I was not there, in fact I say mea culpa. However, I know that Dorna and the race direction, with Franco Uncini above all, always work quickly to satisfy our requests ”.