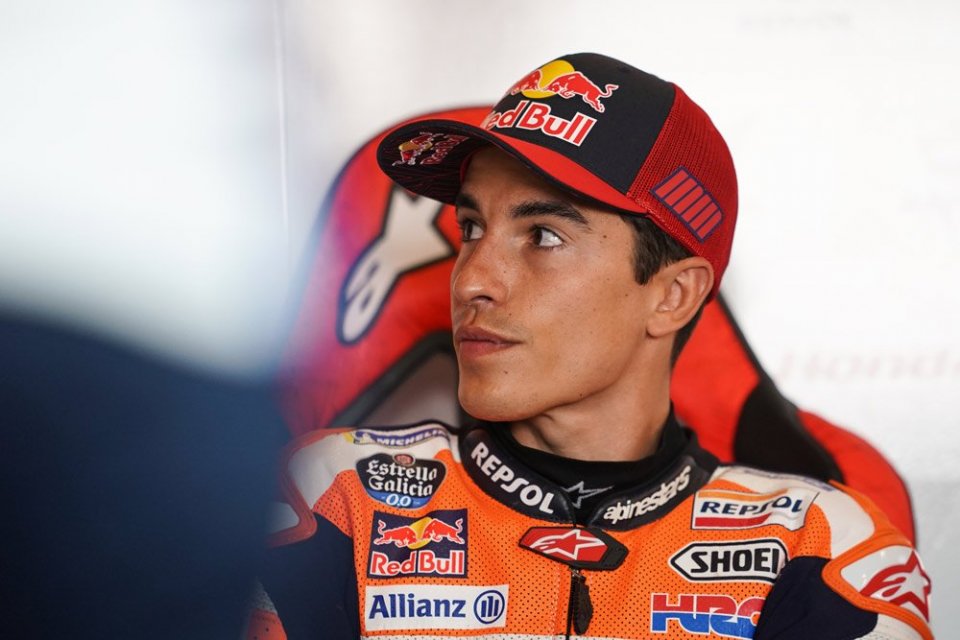 The Miracle Man is back and he did it in a big way, as expected. Marc Marquez left everyone speechless in Portimao as the clock showed how much the nine months of inactivity had not affected even one crumb of his talent. Third quickest time in the morning and sixth in the afternoon (the best rider on the Honda, if there was any need to specify) were his credentials on his return to the track. Hats off and a massive round of applause. Marc was smiling in the garage, he does it during his press conference, and he has every reason to do so.

“What did I say when I returned to the garage for the first time? That riding the MotoGP bike was easier than the road bike, that's why I laughed - he said - I went onto the track and immediately felt at ease and then I smiled again when I saw that I was close to the best with the times " .

Your rivals said you would be fast…

"If they are not surprised, I am: first of all the sensations I had on the bike and then for my position in the standings".

It seems you no longer have butterflies in your stomach…

"I was nervous before entering the track in the first session, there were damp spots on the track and it is difficult to ride in those conditions. The hardest thing was the braking: every time I thought I would not stop. I no longer had an eye for speed, I was braking late because the other riders were doing it at that point and not because I felt it. Then, with the laps, things got better ”.

So how did the day go?

“It was a great day and a great feeling, and honestly speaking from the first run even when the track wasn’t so good, I felt good on the bike. In terms of feeling, I was better in the morning than in the afternoon, because my arm was fresh and I had more power. In the afternoon, I was struggling a little bit more to warm it up and feel that it was more tired. We’re in a much better situation than we expected before the weekend, and I don’t know how! I don’t understand what’s going on – I’m just riding the bike! But it’s true that the main question mark for me is how the arm will react through the weekend and how I will wake up tomorrow, because the speed is there. If I have less power, then I’ll have to change my riding style because this circuit is physically demanding.”

“The arm at the bone level is completely healed, otherwise I would not be here, but at the muscle level I am suffering. Especially with regard to the shoulder, which I had operated on less than a year and a half ago. The deltoid is still a bit weak and if you remember it bothered me even in last year's winter tests. Inactivity didn't help, it's one thing to work in the gym and another to ride a bike. "

Do you expect to have to grit your teeth?

“We will have to wait, my physiotherapist and the doctors have warned me that my arm will get worse, my strength will decrease over the course of the days and I expect to suffer especially in qualifying. As I said yesterday, I’m not putting pressure on myself and I don't rule anything out, everything that comes will be fine. I am already close to the leaders and it is positive ”.

Did you take any extra precautions on the track?

“I can't get on the bike and think about not crashing, I do what I feel. In the left-hand corners I already ride well, but in the right-hand ones I lack a bit of strength to load the front end. However, these are details ”.

You have already made one of your saves ...

“The last lap was a little crazy – I didn’t like it but I had a nice save. It’s true that with a new tyre I’m struggling more than I am on a used tyre, because with a used tyre the bike becomes softer and the times are slower, and I feel much more comfortable. With a new tyre, everything is stiffer, and particularly in the change of direction from turn six to seven, my head said it was time to go in but my body didn’t follow it. I slid a little bit, but I created the slide to complete the turn, but that’s just the way I ride. I didn’t give up the lap because it was the last one.”

It looks like the old Marquez is already back…

“I still don’t know my target because I don’t understand how I'm riding the bike. I’m working with Stefan Bradl’s base because I don’t really know how to set up the bike. I felt slow. I know I’ll be more tired tomorrow because I already feel it today. It was honestly a surprise when I went into the box and saw I was P6. I made a lot of mistakes and I expected to be out of Q2. The speed is there, but everything depends on my physical condition.

“I made some comments, but I still can't figure out which direction to take and I don't want to lose my way. Tomorrow we’ll start to change things.”

Taramasso: “With the new Michelins, it’ll be easier to adjust the bike.”