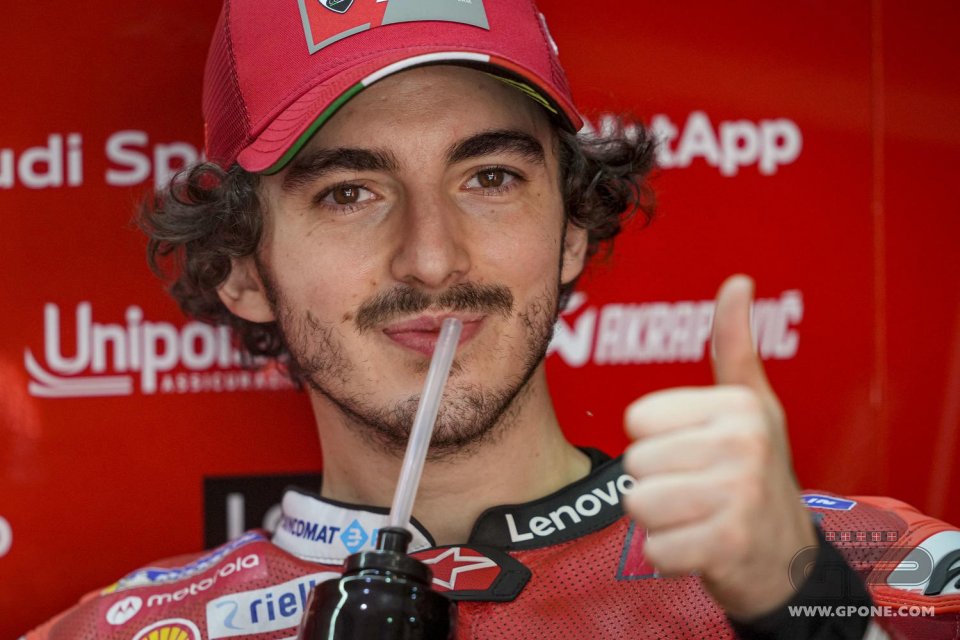 Pecco Bagnaia's 2021 season on the factory team’s Ducati started well, with a podium and pole in the opening round, followed by a sixth place in the second. Well yes, but not so well if we consider that many observers indicated Losail as the scene of a possible double victory for Ducati. The reality, however, was very different and it was another bike that prevailed, namely the Yamaha M1 with Vinales and Quartararo. Now the world championship has moved to Portimao and while it might be true that on paper Losail was the perfect track for Ducati, it is just as true that the Portuguese track seems to be the perfect antithesis from this point of view.

The undulating Portimao track does not on paper have the characteristics that can allow the Desmosedici to express itself, but in 2020 Jack Miller put in a great performance, qualifying in third position and then finishing the race in second place behind an unbeatable Oliveira. Ducati can therefore go fast here too and Bagnaia will more or less be racing his first GP here, because last year his race came to an end after three corners due to a dislocated shoulder caused by an involuntary contact with Joan Mir. But the real topic of Portimao is obviously the return of Marc Marquez and Bagnaia has very specific ideas about it.

"Regarding the return of Marquez there are two different scenarios - said Bagnaia - The first is that he comes back and kicks everyone's ass, he could go really fast right away. The second instead is that he pays more attention to his arm, that he tries to understand his balance, regain confidence with the bike without taking too many risks. In my opinion at the moment he is in a situation where he cannot take too many risks with his injured arm. He will be fast, knowing Marc he is back to 100% fitness and thinks he can be very fast right away so he will try without a doubt. The track is complicated, but he knows it well because he had also ridden there with Moto2, so we'll see. There are these two scenarios and we'll see how he faces them. "

Does the presence of Marquez on the grid change anything for you?

"Here we are all professionals and we are here to give 100% by doing our best. I’m mainly thinking of myself, then if there is one more rival I will fight with him too. Honestly, Marc's return has created a lot of buzz these days, but I’m only thinking about myself. If he goes well, it will be good for our sport, but at the moment I’m honestly thinking about myself and doing a good job. "

Could Portimao be a better or worse track for Ducati than Losail?

"Last year here was a great weekend for Ducati. Jack was strong, while the official riders suffered a bit more. I looked at his data a bit to understand where he made a difference. Last year I struggled because I was coming from a complex period, I had lost confidence with the bike, while now I am in a completely different situation. I feel good, I think and I hope it can be a better weekend for me. We also need to understand the weather, it looks like it could rain tomorrow. My goal is to get into the top five again and I think I have the potential to fight for that. "

Will the aerodynamic innovations brought to Losail also work on such a different track?

"I hope the new aerodynamics work here as well. It gives us something in the fast corners and on this track there are some very fast corners, so I think it can help us with the Portimao layout as well."

What did the second round at Losail teach you?

"In the second race I learned not to brake too hard in the slipstream. In Losail I made an error of judgment by braking too close to Zarco, I arrived too hard at the braking point and I didn't stop. I threw away a win. I'm getting a lot of confidence from the front of my Ducati and this is fundamental for me, it's something I need. I realized I had thrown away a win, I was as fast as Quartararo and Vinales at the end of the race, I was running very strong. I feel I threw away an opportunity, but having already had the chance to fight for the victory is a positive thing that we must treasure ".

Were you surprised to find Jorge Martìn so competitive right away?

"Jorge did a great job. It was his second race and he didn't have a normal winter testing season. He didn't test in Valencia, Jerez, Malaysia. He only did six days of testing and at first he also struggled. In the first race he had problems over the distance, but in the second he was fast all through the weekend, also very consistent. He handled the situation very well in the race, we fought behind him while he remained calm. He rode with his style, very clean and did an incredible job in my opinion. I was very surprised to see him fight for the podium right away. I knew he would be fast, maybe even that he could fight for the top five. But finishing your second MotoGP race on the podium is something you can only see in very few riders. "