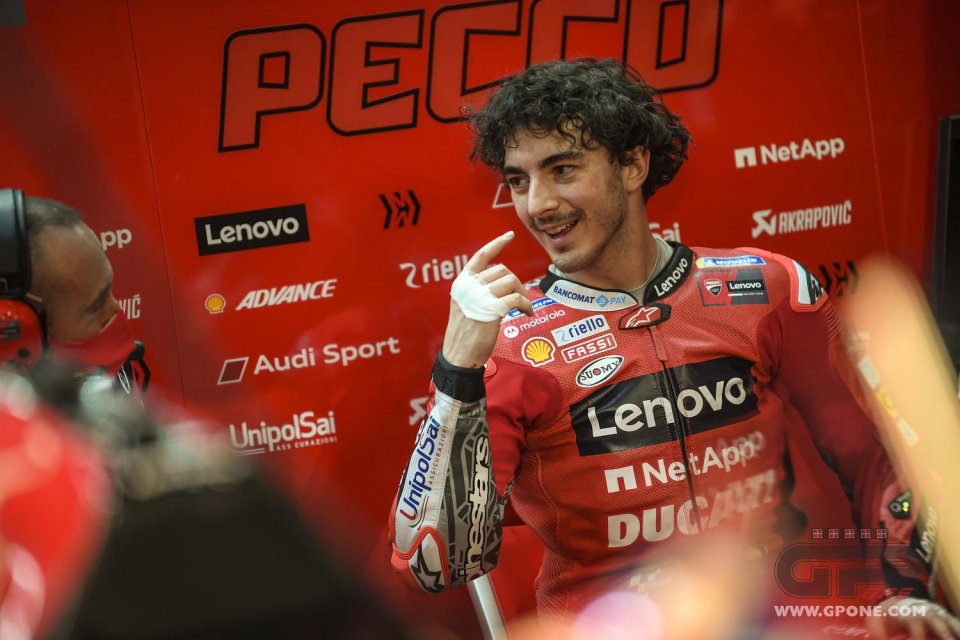 Pecco Bagnaia was just perfect today, ending the day with the best time and finding that confidence on the Portimao track that he didn't have in the 2020 edition of the Grand Prix. Today the Ducati rider was incisive on the time attack and concrete as regards the race pace. A mix that appears to be the best possible premise for a weekend as outright protagonist.

"For me it was a really positive day - commented Bagnaia - because last year here I had so many problems with my confidence with the front of the bike. I was losing time everywhere, I didn't have confidence in the bike and I thought I would crash at every corner. Today I immediately felt good with the bike in FP1. Today my bike was working very well. In FP2 we made a great step in front with my rear feeling which helped me a lot with the traction. I did another step in front thanks to my team when we tried the time attack. Everything came very good. When it goes like this it's magnificent, I also had a great pace, I feel ready to face tomorrow ".

Here in 2020 things didn't go well, but it was also the end of the season. Maybe you had a lot of tiredness?

"At the end of 2020 I was really very tired, after my operation for the injury I had a lot of problems. In the last few races it was difficult to stay fast, I think I was really tired when we arrived in Portimao while everything is different this year."

In the past you had trouble being fast right away, while this year it seems that this problem has disappeared…

"In FP2 I started with a used front medium and I wasn’t able to be very fast. After that, things improved, and my new approach also pays off when I enter the track. Often after the launch lap I started scoring red helmets in the first sectors, it means that I immediately have control of the bike and this is important. In winter I worked a lot on this aspect, because in modern MotoGP it is very important to get on the track and be fast right away. I’ve worked a lot on this and now it’s easier, I learned to heat up the tyres better and this is the key to making everything easier. "

Maybe the changes on your Ducati are helping you from this point of view?

"The true thing is that our bike is close to last year’s bike. We are working a lot on the set-up, which is not very far from last year's. I'm working on my riding style, I'm adapting better to it and the bike has also come closer to my needs. This is only the third race, but I feel much better on the bike, I think I have done a good job on my riding style in the winter and this is paying off. The frame is very similar to the 2020 one, there are small changes but they are aimed at having more confidence, no big difference".

Were you surprised by Marquez's speed on his return?

"I am amazed that people did not think that Marc would come back like this. In the past he has always shown that he can get back on the bike and be very fast after a crash. He is very fast and we all know it, he was the fastest in recent years. I was impressed that he came back after not riding a MotoGP for almost nine months and managed to be very fast right away. That was tough to see. I would have expected to see him so fast right away anyway. "

Your Achilles heel last year was perhaps the lack of consistency. Do you think this is a thing of the past?

"I think the Ducati-Bagnaia package is more solid. I struggled a lot here in 2020 and being so fast today made me happy. The work done in Qatar helped me a lot, I want to be so consistent until the end of the season, take advantage of the potential on every occasion. In this MotoGP you have to be consistent and I will try to be so. "