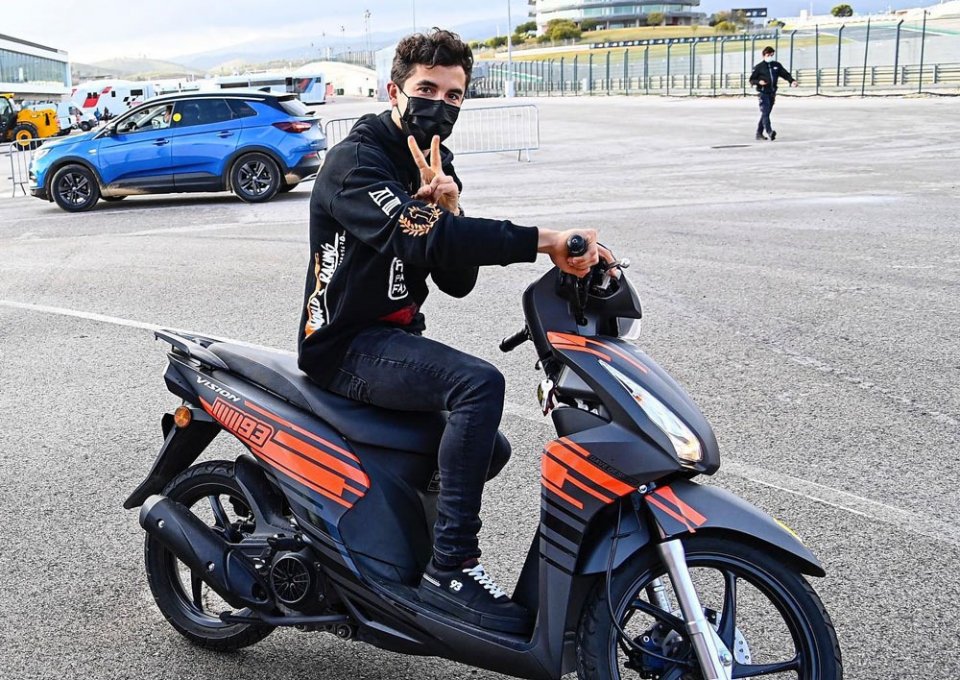 "The lesson I learned is easy: there are a lot of races to run but we only have one body".

Who knows how long Marc Marquez had been waiting to be able to say these words and finally the time has come. Again on the other side of the screen, the right one for a pilot, with the cameras and spotlights on him. In Portimao he sat among the other riders, returned to his usual habitat, to talk about his last nine months of hell and his hopes for the future.

“First of all, I am happy to be with you, with the whole MotoGP family in general, happy with butterflies in my stomach. I was aware that it was a normal weekend... when FP1 passes, it will be more normal (laughs). I know that after the first free practice session they will disappear, now it's time to have fun again. I had already met my team and today I spoke to the Japanese technicians, they are all very motivated, but I told them that I have no goals for this weekend. I will not be the same Marc I have always been from the first practice session, I will need time because the recovery will be both physically and mentally. But it's nice to be here and to be able to ride my bike ”.

Marquez: "I watched the races on TV like any fan"

What was it like watching the races on TV?

"Strange, especially at the beginning, then I got used to it and it became normal, I was like a fan. It was difficult for me not to race in Qatar, I was ready but not 100%, the doctors decided to stop me and I accepted their advice. It was a tough nine months, with so many doubts: not only did I not know if I would go back to racing but also if my arm was back to normal. I have always been optimistic and this has been the key point, and the people around me have helped me by giving me motivation ”.

Marquez: "if it rains I'll try: if I'm here it's because I'm able to ride in all conditions"

What do you expect from the first practice session, it might also rain ...

“I wouldn't like it much if it rains after nine months without riding a MotoGP, but it will be what it will be. If I am here it is because I am able to ride in all conditions. The ideal thing would be to do a private test tomorrow morning, but that's not possible. A month ago, here in Portimao, I rode a real bike for the last time, except last Monday when I trained with the flat track one. All the other riders have a lot of confidence, but that's not my case. I just have to do things step by step, tomorrow my winter tests start ”.

Marquez: "I told Takeo that I have no goal, I just want to ride"

Can't you even imagine what's going to happen?

“I honestly can't answer this question. My first goal is to feel good on the bike, that's the reason why I'm here. The question mark, mine and the team, is how my arm will react over the weekend. I made the decision to race here with the doctors, there were also possibilities for Qatar, but the choice was not unanimous. Today I told Takeo that I have no goal, I just want to ride. This is not the time to put pressure on myself. I expect to find a tough category, as I saw on TV: all the bikes are official and there are the best riders in the world, while I come from a big injury. I don't know how long it will take me to recover. In the last few months I have ridden a motorcycle for three days, it will be difficult, but this is a step that had to be taken in my recovery path ”.

But a lot of people think that you will not be satisfied.

"I know that in the media the expectations are high, but I have to isolate myself. Usually I am the first to put pressure for the results, but this is not the time to do it."

What if there was a chance to go for the win?

"I said that I have no goal, but I do not rule out anything before starting: the better my sensations will be on the bike, the better my results. But I know that I will feel the fatigue, it always happens even in winter tests even when you are training. I tried to prepare myself in the best possible way in the gym, but this is also part of my recovery process ".

Marquez: "The championship is not an obsession, there will be time to think about it"

Don't you think about the championship at all?

"Logically, I look at the points that the other riders have in the standings, but it's not an obsession. Right now I have other, more important goals. When I get back to being competitive, then I'll think about the title, if there is still time."

Do you think your rivals are feeling the pressure over your return?

"Honestly I don't think about them but, in their situation and with the right self-confidence, why should they be nervous? It's true, in the past I won a lot, but now I'm back from a difficult situation and I have only ridden three times in the last nine months ".

Marquez: "I have to go back to feeling like a MotoGP rider"

Have you also tried to prepare yourself from a mental point of view?

“Yes, but it's difficult. I would like to feel normal but that's not the case. Physically I feel ready, mentally I have to go back to feeling like a MotoGP rider again ”.

"It will mean lapping at 300 kph and also crashing, because sooner or later it will happen. I was the one who told the doctors: let me get back on the bike until my arm takes another crash. That's not what worries me, me I just want to get back to riding the way I want and we'll find out how long it will take. "

Marquez: "My brother Alex allowed me to stay connected to the racing mentality"

What do you lose in being inactive for so long?

"The first thing you lose is the habit of speed, as well as braking, then being on the track with other riders, overtaking. Instead I think it will not be a problem to return to the race mentality, my brother Alex has helped me to always be connected . Even with Santi, my crew chief, I spoke with him after each race. I did it because I didn't want everything to be new when I came back. "

Have you got an idea of ​​how MotoGP has changed in your absence?

"Understanding the situation from TV is impossible, you see so many ups and downs, even from one day to the next. It's strange. I can't wait to race, because in the second GP in Qatar there was a big group in the front, I'm not ready for a fight like that yet, but I hope to join in the future. "

What idea did you have of the other riders?

Mir has grown a lot. He is the current Champion and has the experience of achieving a title. It remains to be seen this season if Quartararo and Viñales make the final leap. Who is the leader in Ducati because it is not clear. Until four or five races have passed in Europe, not everything is defined. I wouldn't bet on anyone because I wouldn't know who to bet on. Then we will see during the season if we can be in the group in front so that we do not rule out anything without setting a clear objective.”

Marquez: "I'll start with Bradl's bike, not mine from last year"

Do you expect your Honda to have changed a lot in recent months?

“It is not in the best situation. I spoke to the Japanese technicians and they told me that they are working to understand the problem, to be able to make the bike fast with everyone. I think there are competitive riders, but it seems to me that they are struggling in the same areas that were problematic when I left the bike. I'm talking about being able to have more confidence on the front, being able to crash less, feeling the limit. From 2020 to 2021 there have been no big changes on the bike, but only updates and I have already had a long meeting to understand that. Tomorrow I'll start with Stefan Bradl's bike, not mine from last year, then I'll try to find my compromise ”.

What is the last memory you have of the Honda?

"Certainly not the crash, I have that tattooed on my arm. Instead I remember the sensations on the bike and the bike is basically the one with which I made a great comeback in Jerez, before crashing. I know that the Honda is a difficult bike to understand, but also a bike with which you can do great results. I will face this weekend as if it were normal. "

In the team you will no longer find Gerold Bucher at your side as a data technician.

“It's a small change but a big one at the same time. He was part of my family, but things change and he will continue to work for me, but in the test team, which is increasingly important. Jenny Anderson has arrived, she has a lot of experience in MotoGP ”.

In two weeks there will be the GP at Jerez, the scene of your accident.

"I can't wait to get back to that corner, turn 3, but I'll think about it later. Now I have to tackle a track that I don't know and it will be a disadvantage, but this time it's not about taking off the last tenth but about finding the right sensations ".

"There were days when I thought I wasn't going to heal"

Looking back, what was the worst moment?

"Perhaps between October and November, there were days when I couldn't lift a glass of water. I felt there was something wrong, then they found the infection. I was nervous, I didn't know what was going to happen to me. When I had suffered from diplopia I was optimistic, even if the doctors told me I might not get well I didn't believe it. This time, however, I suffered, I had pain and I began to think that I wasn't going to heal ".