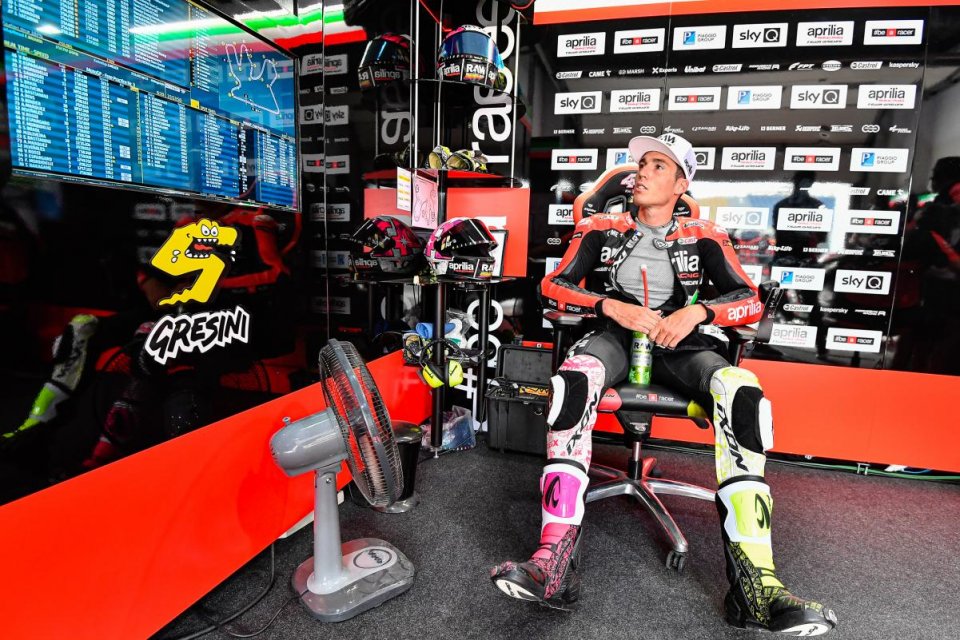 Andrea Dovizioso's test with Aprilia was one of the most talked-about topics of the week, so much so that Aleix Espargarò could not fail to be pressed on the subject. After the encouraging start to the season in Qatar, there was curiosity on the part of the Spanish rider to see the man from Forlì at work.

Aleix did not go to Jerez this week, however, as he preferred to concentrate on his training in order to get ready for the Portimao round. Obviously he received some indiscretions, as he himself said.

“I did not speak to Dovi – the #41 pointed out - I only had the opportunity to talk with Albesiano this morning, and he told me that many of Andrea's opinions on the bike were similar to mine. Jerez was a test that allowed him to work first and foremost on ergonomics, the right position on the RS-GP21, given that he hasn’t ridden a MotoGP bike for a long time. But I know that he liked the Aprilia, he will do another test and he will help us in the future. "

There was certainly a lot of expectation to see the former Ducati rider on the latest evolution of the Noale manufacturer’s bike.

“As I said, I don't have much more information regarding Dovi's test. He mainly worked on the sensations and I don't think he tested things that can help me at this moment in the development of the bike. As far as I know, I have a slightly different style with the Aprilia than his, since the RS-GP21 allows you to be very fast in cornering speed, unlike Dovi, who preferred to be a bit stop-and-go with the Ducati. However, I am pleased to know that he was happy with the bike and that we have the same ideas about it.

After talking about Dovizioso, the topic returned to the race weekend.

“To tell the truth, we have nothing new to try here in Portugal. In the winter tests, however, we worked hard, to find the necessary confidence when it comes to stability. As we all know, here in Portugal it will be essential to keep the front tyre well down on the ground, since it is a particular track of its kind with many ups and downs. As for my expectations, if I look at our performance in 2020 I must say that it did not go badly one year ago, because we managed to be competitive. This could therefore be a slightly more favourable track than Losail ”.

His last consideration was the return of Marc Marquez.

“It is good for our sport to find Marc again. I am of the opinion that it was really difficult for him to stay indoors for so many months without the bike. I tried it with Covid, I can’t imagine how it was for him with the injury ".