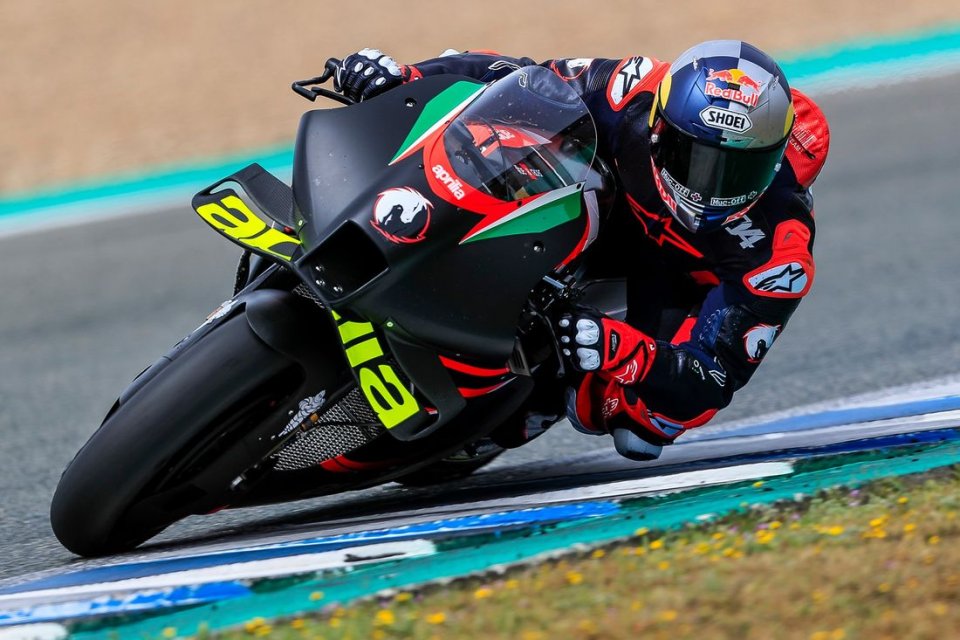 The big day has arrived but without any fanfare, indeed accompanied by a deafening silence. Today Andrea Dovizioso got on the Aprilia RS-GP for the first time, the first of three days of testing that will see him in action at Jerez on the Italian bike. Naturally there is a lot of curiosity to see Dovi in ​​action on Noale’s MotoGP bike, as well as to know his first impressions. However, we will have to wait, because there will be no comments from the Italian until Wednesday.

As if that weren't enough, the circuit named after Angel Nieto is practically on lockdown. The track was booked by Honda which as a result makes the rules and the secrecy of the Japanese is well known; this means that the track is off-limits (or almost) even for photographers. Despite everything, the first images of Dovizioso on the Aprilia (through the company's social media platforms) have arrived and you can see them in the gallery below.

The bike was strictly black, as befits a test, with the symbol of two horses instead of the number. The helmet is a little surprising, completely Red Bull branded and not with the usual graphics. Aesthetic issues aside, Dovi used this first day to get rid of the rust and get to know the Aprilia bike.

As always, the rider from Forlì was very methodical, using the morning to dial himself in on the RS-GP and modifying its ergonomics. After all, he has three days of testing ahead of him and plenty of time to proceed step by step. Also because this is only a first contact, useful for him to get to know the bike and for Aprilia to get valuable comments from a rider of his calibre and his experience.

There are no official times, because as they are private tests, the test riders do not mount transponders, but at this moment the stop-watch is the least of the problems. Dovizioso simply has to have fun and understand if Aprilia will be a possible path for his future. On the side of Noale they don't want to put any pressure on him, knowing that this test is already very important. And if Andrea wants to continue, the Mugello track is already booked for a date in the next few weeks.

At Jerez there is not only Aprilia, but also Cal Crutchlow with the Yamaha, Mika Kallio on a KTM, the aforementioned Honda with Bradl and also the MotoE riders.