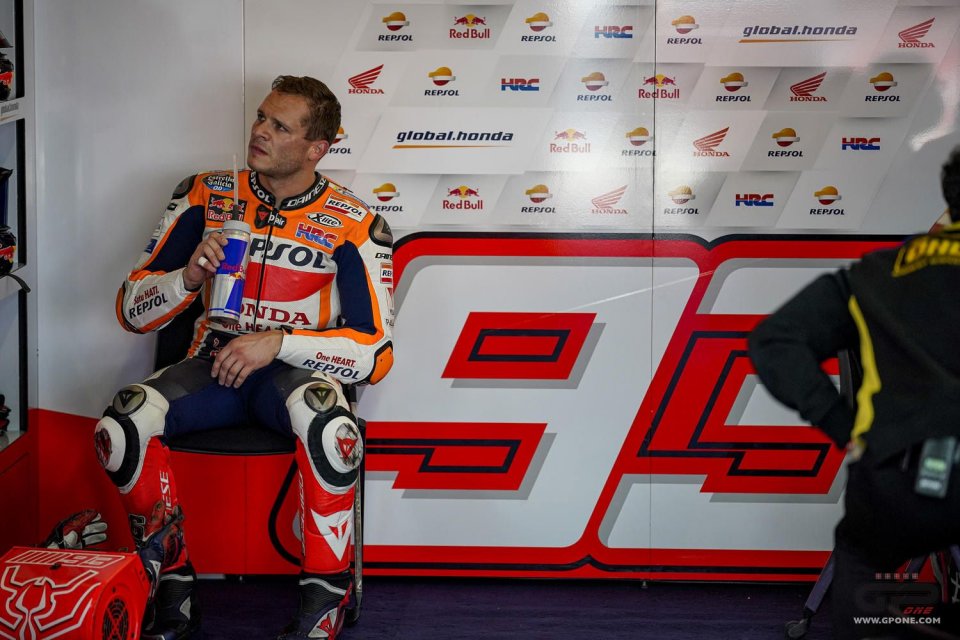 by Günther Wiesinger (Editor-in-Chief of Speedweek)

Stefan Bradl flew from Munich to Seville today at noon, as he will test from Monday to Wednesday at the Circuito de Jerez, where he will fight for championship points again on May 2nd with a wildcard for the HRC test team.

The Honda test rider has stood in for Márquez in the factory team, earning a lot of respect. Now the 31-year-old is returning to his role as test and reserve rider. Of course, the 2011 Moto2 World Champion would have liked to race in Portugal because on November 22, 2020, he surprised everyone with a strong seventh place.

Bradl was accompanied on the flight by his compatriot Gerold "Hugo" Bucher, who worked for Marc Márquez as a data recording engineer for ten years and is now part of the test team led by Klaus Nöhles.

Stefan, were you surprised when HRC and Repsol-Honda confirmed Marc Márquez's comeback for the Portimão weekend today?

“No, because I knew it before. Alberto Puig informed me a little earlier.”

Were you surprised at the timing of your return? The ups and downs of Portimão are not exactly the easiest place to come back after nine months and three upper arm operations. The track in the Algarve with its blind curves is very physically demanding, isn't it?

“I expected Marc to come back in Portugal because his return almost worked out in Qatar. It doesn't matter which track he comes back on in my opinion.”

It wasn't easy for Honda in Qatar either…

“Portimão is a demanding racetrack. But at Jerez two weeks later, his job wouldn't be that much easier either. There, too, you have zero time to rest. The tracks that are now on the program in Europe are not all easy. Not even Le Mans. With MotoGP there is no track that does not make extreme demands. So I would say: the earlier Marc comes back, the better. If he wants to have a say in the world championship, he has better chances after two races than after three, even if the chances are very slim.”

“I don't know if it's enough to win the title. I don't know if I can trust Marc to do that now. But he won't be the one who will be doing the chasing. He won't be in midfield either. I'm sure about that”.

Without team leader Marc Márquez, there has been constant uncertainty at HRC. Nobody could assess what the performance of the four GP riders was worth. Because Márquez has always been the yardstick at HRC since 2013. The ghost of Marquez always haunted people's minds and the question is: What results would the champion have squeezed out of the Honda?

“Yes, we will see that in Portimão and in the next races. We have been waiting for this for months. But not only HRC is looking forward to this reference, but the entire MotoGP field. Everyone is waiting for the best rider of the past few years to get fit and return to the racetrack. For us at Honda it is of course particularly important that we have an assessment of where we are at the moment. We are curious to see how Marc gets on with the bike, what problems he has with it and what he has to say about it. I'll be driving from Jerez to Portimão on Thursday and I will listen carefully in the HRC box to get his first-hand impressions.”

If Marc Márquez comes back after nine months, after a fracture in his right upper arm and a Honda that is not optimally competitive, can he still perform as well as in his best days?

“A Marc Marquez doesn't come back unprepared. Believe me. He's a professional through and through. Sure, this is a new challenge for him. He's never had one like this. But I am convinced that Marc has given a lot of thought over the last few months about when and how he will come back. It will be planned in great detail. I am sure he learned from the mistakes he made. I have a strong opinion of Marc. You don't necessarily have to expect that he will win the first race or finish on the podium. But that is completely irrelevant. The main thing is that he is fit and competitive again and gradually regains momentum. In the next races after Portugal he can again set concrete goals. But if Marc were to finish on the podium in Portimão this weekend, I wouldn't be surprised. That wouldn't be a sensation for me.”

The Soft tyre in the front provides riders with a very good feeling and also a strong grip on maximum angle. The Medium front tyre could also be a...
2 hours 16 min ago

At the exit of Turn 5, Miller was observed to be riding slow on line, disturbing rider #12 and causing a safety concern. Same punishment for Baltus...
3 hours 3 min ago

The Stewards have decided to punish Franco for obstructing Bastianini in FP2, the Yamaha rider had already received a verbal warning at the...
1 day 3 hours ago