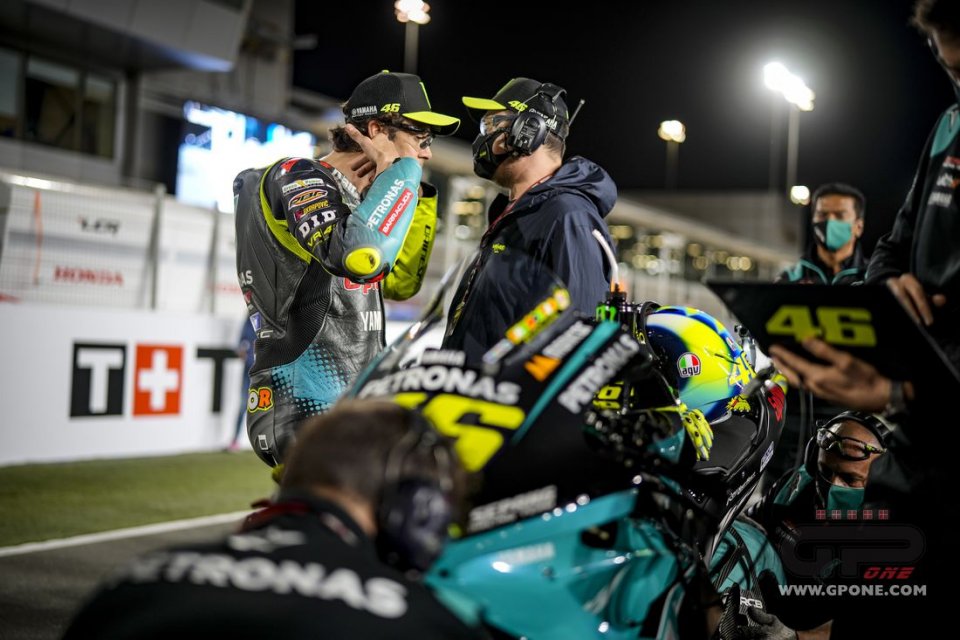 He is the person who, after his mother and father, probably knows Valentino best of all. We are clearly talking about Alessio Salucci, who has been working alongside Rossi for years. ‘Uccio’ has shared a good part of his life with the Doctor, accompanying him on circuits all over the world and for sure he could not miss out on this new experience in Petronas colours. In Qatar the Doctor's expectations were very different following that fourth place in qualifying two Saturdays ago, but instead he had to deal with two weekends characterized by numerous difficulties, so much so as to keep him away from fighting with the best.

However, the message that Uccio wants to convey is that it is forbidden to mention the word alarmism.

"Unfortunately the world championship did not start in the best way for Vale - declared Alessio – the two GPs at Losail were not easy, because in the race he suffered from rear tyre wear, an aspect that has accompanied him for some time. It's a shame to have seen it from far away, but there have been some positives during these two weeks. First of all, I'm talking about the race pace he found on Sunday, since it was consistent and not up-and-down. Maybe from the outside it can take a back seat, but that was one of the points on which Vale wanted to have some answers. Furthermore, compared to the first race, he managed to be faster, taking a step forward over Saturday. In the end, however, as we all know, it’s the result that counts so from now on we are looking to Portimao ”.

Alessio, how angry was Valentino about these two races?

“As he himself said, getting angry is pointless, if anything he was disappointed. But we know Vale well, he is tough, hardened. He is someone who has always got up again from difficulties and I am convinced that he will do it again this time. Today (yesterday, ed.), just to give an example, he was already on the bike at the Ranch training to prepare for the next race. You can see from his face how hungry he is "

At a time when Valentino is struggling and continues to be behind, everyone inevitably starts talking about a crisis and retirement…

“To tell the truth, I haven't read anything about that in these days. However, I can say that Valentino wants to race and I am convinced that soon we will see him fast again on the bike with the Yamaha. We all know what he’s like: he is a tough, lively rider who always puts great determination into what he does. Unfortunately in Qatar the world championship did not start in the right direction, but I am convinced that in Portimao he will come back fast ”.

"Absolutely not. Two races cannot decide Valentino's future. The world championship has just begun and we will see how it will go in the next GPs. If in the next 4-5 races he is strong and competitive he will certainly continue in MotoGP, otherwise we will see what we can do. The question is very simple”.

Rossi aside, in Qatar, however, you celebrated Bagnaia's podium on his debut with the factory bike…

“It was a great moment and I am really happy for Pecco, who has proved to be a fast and mature young guy. It was not easy to start with such a result, in an official team, but instead he achieved an important result, which confirms what his potential and growth path is ”.

Now all that is missing is the win…

“Easier said than done! (laughs). Unfortunately, winning in MotoGP is difficult, because we have now reached a very high level, where in a GP there are 7-8 riders who can aspire to victory. Success is the last click you have to make. I am convinced that one step at a time he will arrive, because in recent years he has matured a lot and has managed to achieve important results, overcoming the pressure”.

It wasn't easy to shake off that 2020 season finale…

"Exactly. Pecco suffered a lot from his injury at Brno last year, as the podium on his return from Misano partially masked this. It was not easy to recover, but this year he started with great determination, following the right path "

Too bad about Morbidelli instead…

“I feel very sorry for Franco, because we all hoped for a different start from him in the world championship, instead he struggled in these two GPs in Qatar. In the second race he had some strange tyres, with which he was not able to find confidence, while on the occasion of the first race weekend he had a problem that I did not understand ”.

Do you think there is something to worry about?

“No, because the world championship has just begun and in Portugal I expect to see him fighting with the best. As I said before, I am of the opinion that this will be a world championship with a very short ranking and without a leader. You just need to win one race, do well in the next one, and you find yourself up in the top part of the standings ”.

Fortunately he is one of those riders who always remains on the ball, without losing heart…

“Franco has a great quality, which is to always remain lucid and analytical. He has already forgotten about the two Losail races and is now focused on the Portimao one. He is a young guy, capable of reacting and restarting quickly, and in recent years we have seen that ".

What effect did it have on you to see him and Valentino in the same box?

"I usually see them at the Ranch together, but in the MotoGP garage it's a something totally new. I admit I was thrilled to see Franco alongside Vale. I remember when Morbidelli was a few years younger and he was offered to the various teams for a seat, but now he is in the same garage with Vale. His has been an admirable path ”.

On the list of the VR46 Academy unit we cannot forget Marini and Bezzecchi. Marco seemed at times to be using his head in the races, do you agree?

“Yes, he managed the two races in the best possible way. He could have been on the podium, but he was very good at not risking too much and taking home important points for the world championship. Lowes showed that he has something more, but we are only at the beginning and therefore there is plenty of time. What can I say about Luca: it was his first MotoGP race, he is trying to tailor the Ducati for himself and I expect him to improve. Unfortunately in Qatar he suffered something with the tyres, but I am convinced that in Portugal he will be faster ”.

Alessio we have talked about the riders, but not about teams. By June you will have to decide what to do for 2022…

“That’s the deadline and we are trying to understand how to move and which path to take. In recent months we have talked to some manufacturers, we have discussed, but we have not yet arrived at a decision for the MotoGP team in 2022 ”.

Some observers say you will become Suzuki's satellite team. Is this the most concrete lead?

“Honestly, no decision has yet been made about it. There are two months left and by that date we will understand what our 2022 will be. For sure the manufacturers you hear of are the ones that will then lead us to make one decision rather than another ".