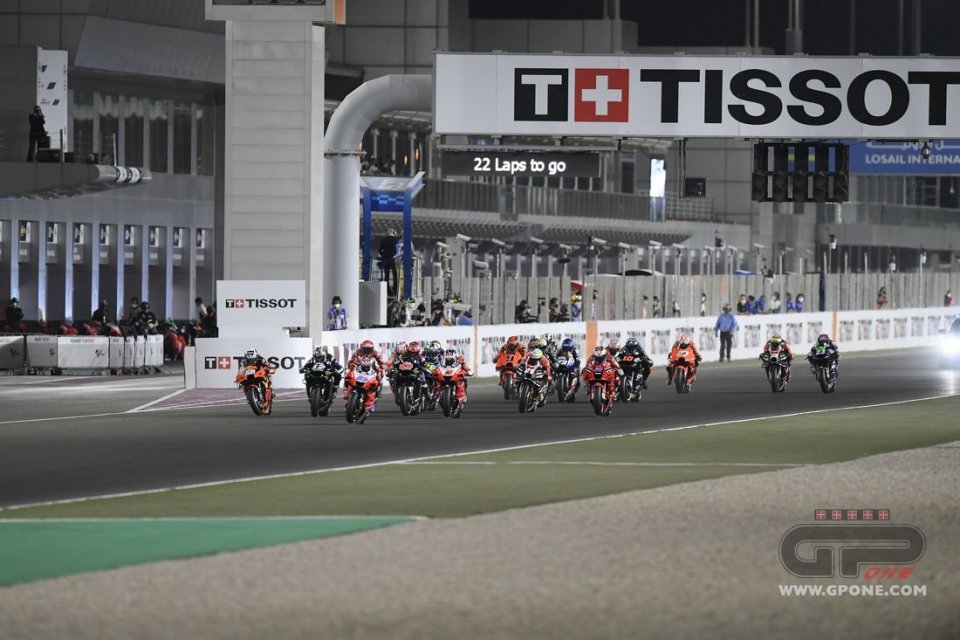 Reflexes, eyes, sensitivity, a bit of luck, and lots of electronics: that’s all it takes for a perfect start in the MotoGP. Like Martin (from 14th to 4th) in the first race in Qatar or Oliveira (from 12th to 4th) in the second. Qualifying and breaking away at the start are now every rider’s nightmares, so much so that it seems like races are won at the first lap and not the last. This is no doubt an exaggeration, but not that far from the truth.

The engineers also figured this out and, in recent seasons, there’s been a flourishing of holeshot systems, the perfect start. As usual, Ducati led the way, first with a system that lowers the rear of the bike and now another that does the same with the front (which has already become the object of the Yamaha and Suzuki riders’ desires).

Is a good start really that important? To know if it is, we plunged into the data of last year’s and two of this season’s GPs, taking into consideration the places at the starting line and at the end of the winner’s first lap. The results are summarized in the table below. 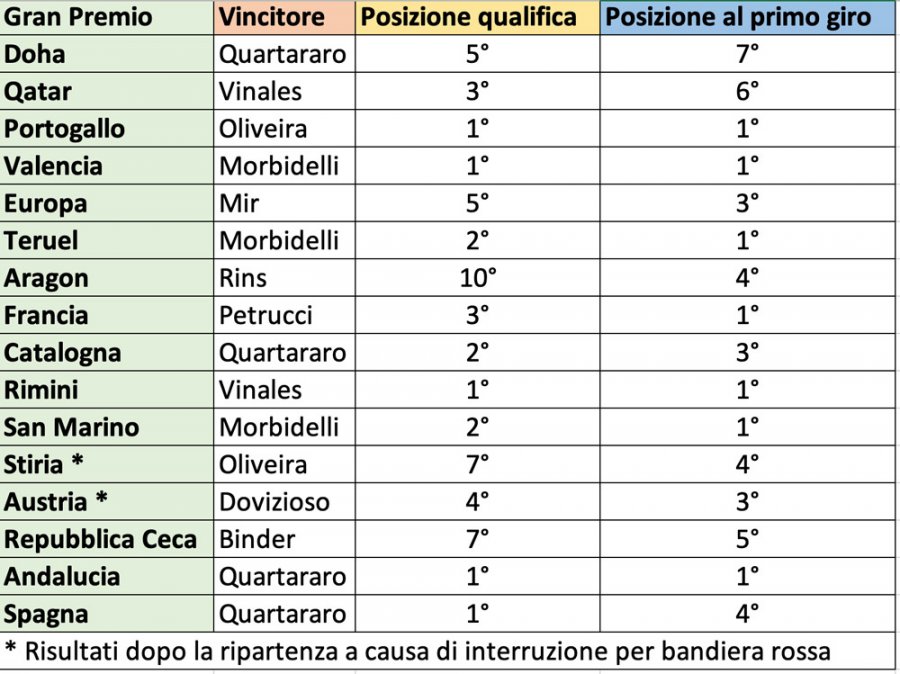 Once the homework is done, we need to find an answer to our question. Not to spoil it for you… but it’s affirmative.

Out of sixteen races, the winner started five times from pole position and ten from the front row. The winner started from the second row only three times,  two from the third, and once from the fourth. That’s not all, because seven times out of sixteen, whoever was in first position on the first lap then won. And not only: in 2020, the winner always ended up in the top five at the end of the first lap. This means that, even in the case of the winner with the worst qualification (Alex Rins at Aragon, 10th on the grid), the start was fundamental. In fact, the Suzuki rider was 4th in the first pass under the checkered flag.

The two winners of this year, Vinales and Quartararo, seem to contradict things a bit. Maverick was 6th on the first lap, Fabio 7th, but the races in Qatar were very unique, with a serpentine of riders until the finish and, it’s no coincidence that the Doha GP was the one with the least gap in history at the finish (less than 9 seconds from 1st to 15th). A kind of exception that confirms the rule.

And that’s not all, since this analysis also provides other insight. The first involves Suzuki, which won the title with Mir last year but only two races. The GSX-RR is famous for being kind to tires and fearsome in the final race, but also for not being too incisive in the flying lap. A flaw that, as we’ve seen, can cost them dearly.

There’s also another interesting aspect, which agrees with the Yamaha riders who, last year, complained about the difficulty in the scuffle with the M1. Of the six races won last year, in five of these, the rider who did it was first at the end of the first lap, a sign that Iwata’s bike works very well when it has a clear track in front of it. The next races will tell us if this is still the case.