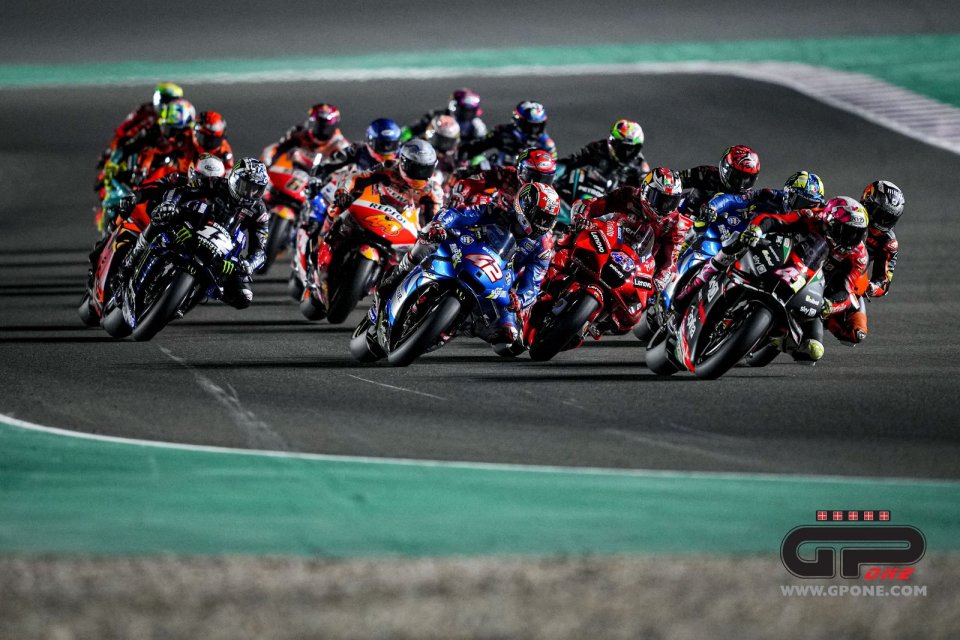 The Losail circuit in Qatar has so far been the only place where MotoGP bikes have lapped in this 2021 season, with the exception of the Jerez tests, where only Aprilia was present with its factory riders. Between ‘winter’ tests and races, the riders found themselves lapping for 12 days on the Qatari circuit.

The long trip to the Gulf state offered us Yamaha in great shape, Ducati with amazing engine potential and in general very fast over the flying lap, Suzuki still struggling with the usual problems in qualifying, Honda still indecipherable without its best rider, Aprilia showing great growth and KTM in difficulty. Yet this picture runs the risk of not being definitive in view of the fact that in 2020 there was no race in Qatar and that the Losail track has such a layout and changeable asphalt conditions that it is reasonable to expect different values ​​on track when the championship returns to race in Europe, starting from Portimao. The six days of testing (actually five, since one was lost due to sand on the track) and the two race weekends somehow favoured a flattening out of the values ​​on the track. In reality, a comparison between the two races gives us some interesting data. 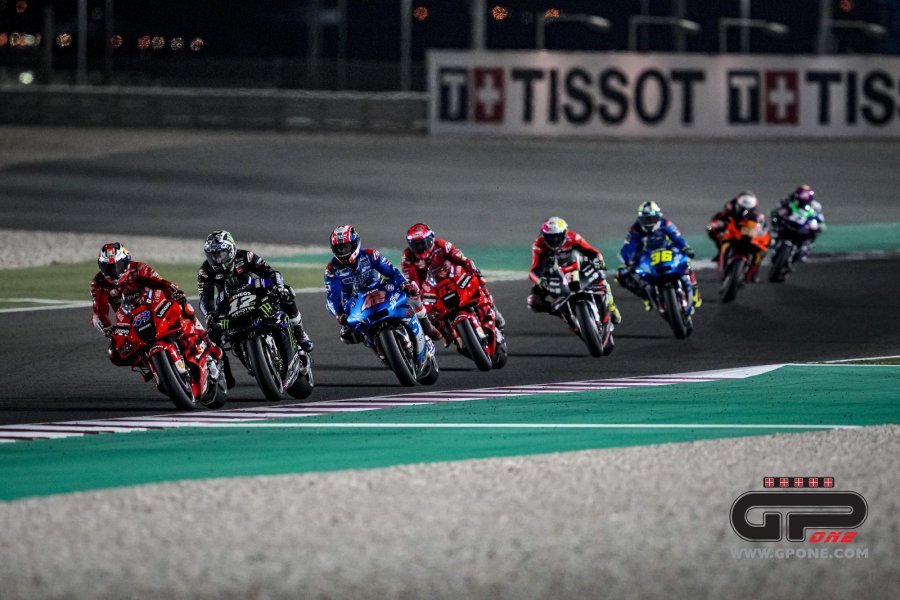 Qualifying times: from Martin the missile to Rossi … the shrimp

A comparison in qualifying between the two events shows us that performance between the first and second races generally deteriorated. This was due to the imperfect conditions that the riders found on the track on Saturday. The strong wind brought a lot of sand onto the track and many riders, actually almost all of them, struggled to replicate or improve the times of the previous Saturday.

Above all, however, with the exception of Martin. The young Ducati Pramac team rider, thanks to a really bad qualifying during the first race weekend, was responsible for an incredible improvement of over 7 tenths which even took him to pole position. After the fantastic 4th place he clawed out in race 1, Rossi appeared to be much more in difficulty during the second round, so much so that he could not go beyond 21st place on the grid, worsening the time he had managed by almost 2 seconds 7 days before. It should be remembered that that time was done in the slipstream of Bagnaia, which however does not justify such a marked difference. Other riders who were a bit disappointing are the Ducatisti Bagnaia and Bastianini, but the latter was affected by the technical problems that plagued his GP19. Added to these is a virtually unrecognizable Nakagami compared to the start of last season. Still at Pramac, the only other rider who, despite worse track conditions, managed to improve (albeit marginally), was Zarco. Considering instead the average of riders for each manufacturers, Yamaha was particularly affected by Rossi's opaque performance, while Suzuki, KTM and Ducati worsened by about 2 tenths. Honda and Aprilia showed a deterioration of about half a second. 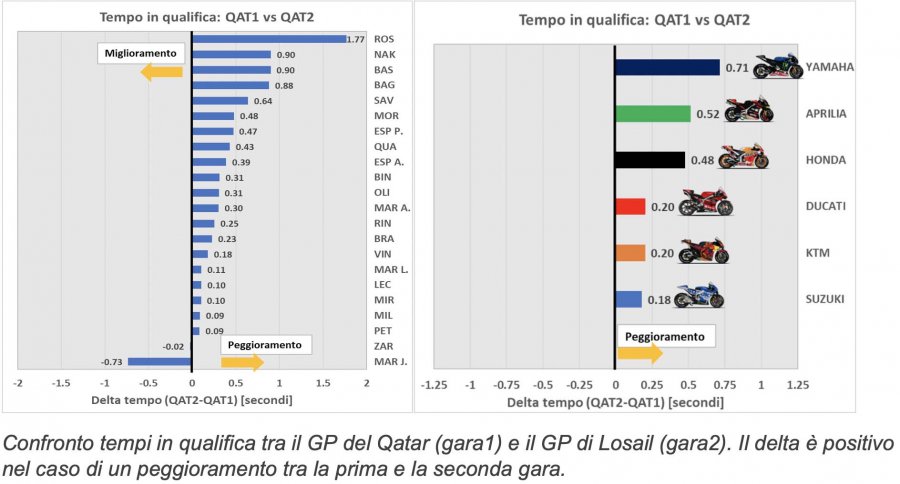 As for the top speeds in qualifying, it goes without saying that Ducati reigns supreme. Even during qualifying for the Qatar GP (race 1), on average the maximum speed was close to 360 km/h, that is… 100 metres in one second! The strong wind on Saturday in race 2 not only brought sand onto the track, but also acted as a brake on the bikes on the main straight. As can be seen from the graph, all the bikes lost about 10 km/h compared to seven days before. Regarding the Yamaha figure, the fact that Morbidelli never exceeded 330 km/h during qualifying 2, against the average of 336 km/h of his brand mates, weighs heavily, a sign that, probably, he always lapped on his own. Something similar for Aprilia. The graph shows a top speed similar to Yamaha and Suzuki, but actually Savadori is very slow on speed (from 5 to 10 km/h less than Espargarò) and this affects the average. The tall stature and perhaps the imperfect execution of the last corner affected the top speed figure. 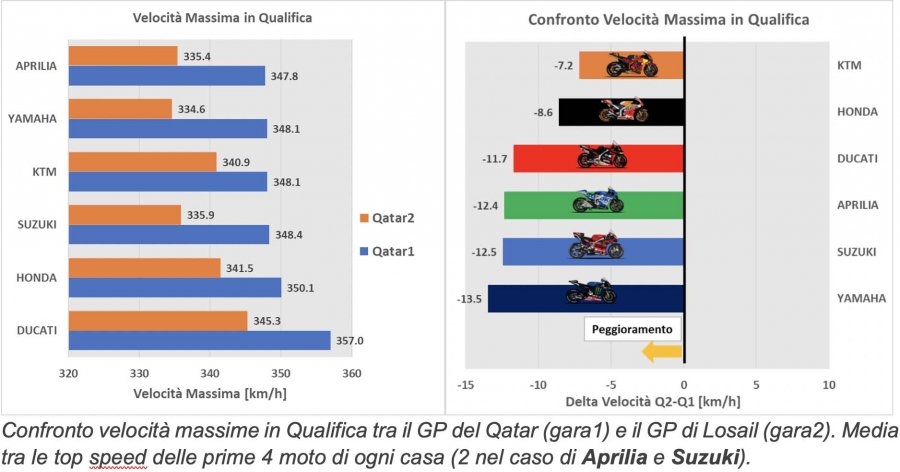 Compared to Saturday, with the wind having decreased, the times in race 2 were back to being similar if not faster than in race 1. This is demonstrated by the total time of the winner (Quartararo) who was five seconds faster than the time recorded seven days before by Vinales who, incredibly, duplicated exactly the same total time as Jorge Lorenzo back in 2016 in 42 minutes and 28 seconds. Returning to the present day, as could be expected, the rider who improved the most compared to the first GP was Jorge Martin.

The Pramac team rider had put together a rocket of a start in race 1, only to be sucked into the group and he then ‘collapsed’ to the edge of the points area. In race 2 he took advantage of the experience gained in race 1 on bike and tyre management to remain in the leading group until the finish line, improving the time set in race 1 by 20 seconds (!). Another surprise, which went a bit ‘under the radar’ was Binder's performance with the KTM. Of KTM we can remember first of all the Martin-like start made by Oliveira in race 2, but actually, the most interesting performance came from Binder, who improved by almost 14 seconds over the first race. The South African, who started from 18th place on the grid, made an incredible comeback with a top 5 pace and finished less than 5 seconds behind the winner. A step forward also for Savadori who improved by over 12 seconds.

For the rider from Cesena, the fact of not being able to follow his opponents and therefore learning the tricks of the trade more quickly in the race weighs heavily. His race pace was on average 1 second slower than the penultimate but there was an improvement over the first race. Remember that Savadori is still struggling with a shoulder injury and we must hope that already from Portimao his performance will come closer (as already seen in 2020 on that occasion) to those of the rest of the group. While for Mir, the slight improvement derived from the skirmishes he had with Miller, for Rossi on the other hand it was a really bad race that saw him improve by just one second compared to the general average of 7s. 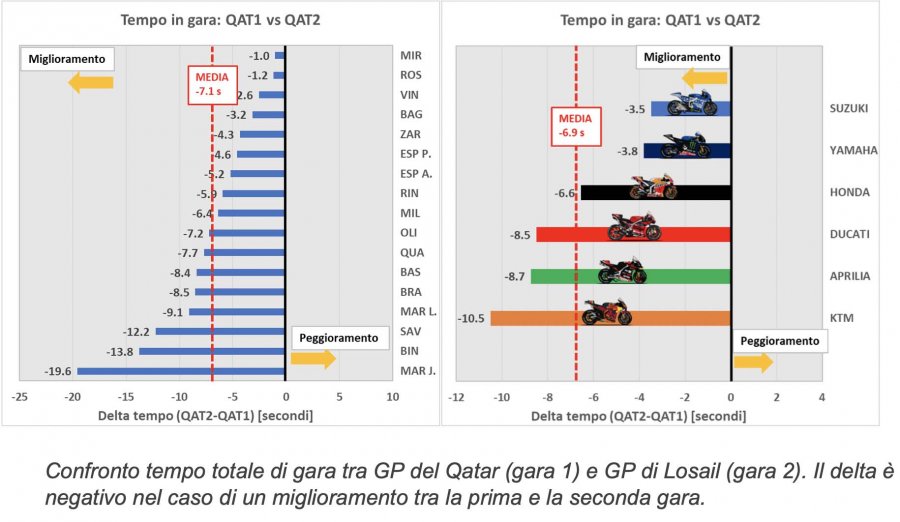 Top speeds in the race: Ducati still dominates, but watch out for Honda

The top speeds in race 2 were slightly higher than in race 1, thanks to the different wind conditions. The graphs below show the averages of the first four bikes for each manufacturer (2 in the case of Suzuki and Aprilia). In outright terms, Ducati is always on top, as can be clearly seen from the images on TV. As in 2020, Honda is still the closest manufacturer in terms of speed. Suzuki is apparently ahead of KTM but the latter's figure is a bit ‘distorted’ by the values of Petrucci, who was much slower than his brand mates (especially Binder). Furthermore, as we saw last year, KTM's strong point is acceleration out of very slow corners (remember Turn 1 and Turn 2 of the Red Bull Ring), a feature that we don't find on the Losail track. Yamaha is still a little way behind, also due to the fact that Rossi and Morbidelli often rode solo in the race. The same goes for Aprilia. As explained above, Savadori also in the race was from 8 to 13 km/h slower than Espargarò, since he lapped without a tow and in any case even under the same conditions (as seen in FP) the difference was never below 6 km/h between the two. 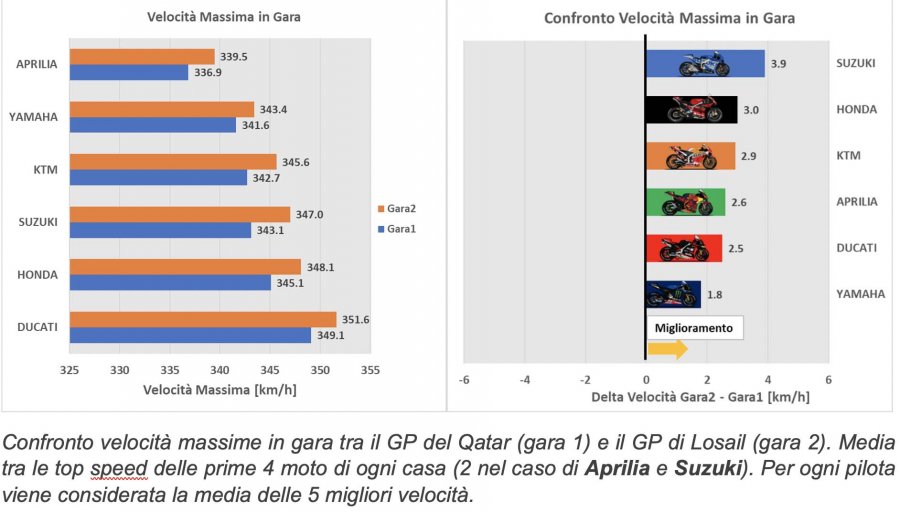 The two GPs in Qatar offer us a picture that risks not being fully confirmed on the European tracks due to the particular conditions found only in Losail. The lack of acceleration out of slow corners may have somewhat limited the advantages for KTM we saw in 2020, which we expect to find again starting from the next GP in Portimao. In addition, the obligatory choice of soft rubber in the race (except for KTM's medium front tyres) may have somewhat masked the values ​​of some bikes/riders who prefer to use harder tyres when possible. The comparison between the two races on the same track showed a little improvement in the race, due to slightly better conditions but also to the experience gained during the previous race, especially by Martin. Overall, between race 1 and race 2, the KTM seems to have improved the most, as shown by Binder’s incredible comeback. Returning to Europe, we will for sure have a clearer picture.

Quartararo: "Wait for Saturday night before the GP before you bet on me”

Morbidelli: "Losail seems to have been designed for Ducati"