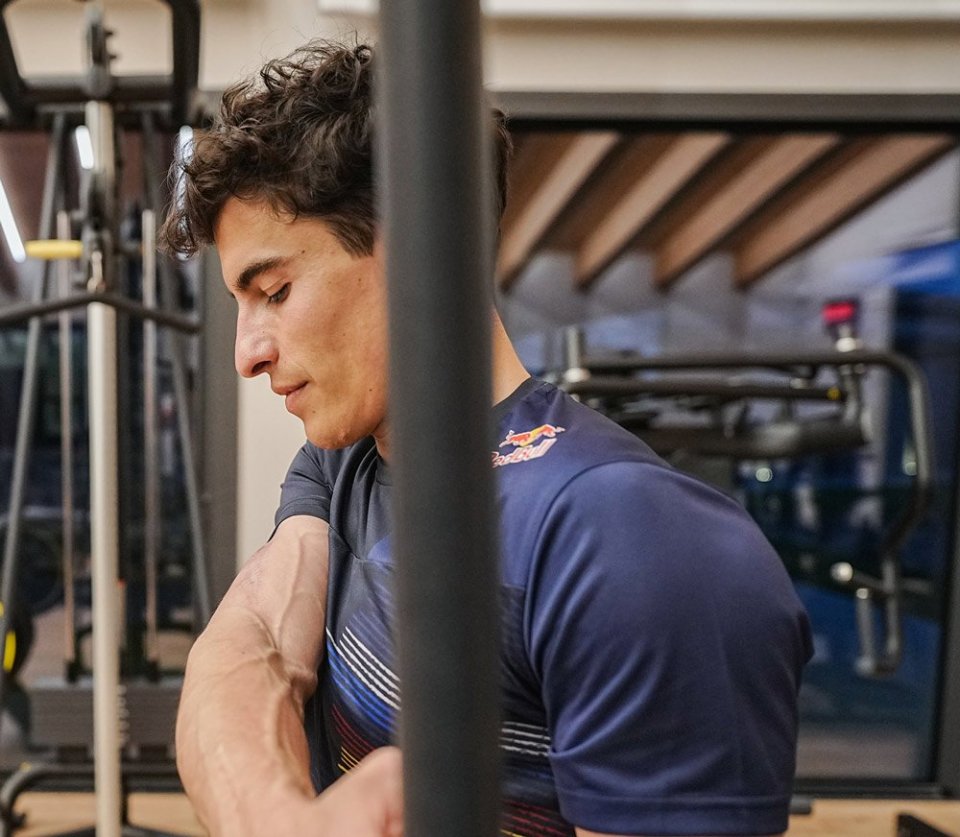 It had been a few days since Marc Marquez updated his fans on social media about the progress of his workouts, but today he’s back with a photo of himself busy in the gym and the words “Non stop!”. Embellishing  too much on the post though is the worst thing to do. Best to stick to the facts. The last we heard, as reported by the Gazzetta dello Sport, is that the name of the Honda rider is on the list of those will have to visit with the doctors on the Thursday before the Portimao GP, to see of they’ll be give the green light to race. Marc was summoned (along with Miller and Lecuona, who both underwent surgery to solve compartment syndrome problems) to be declared “fit to race”.

So does this mean that Marquez will undoubtedly be in Portugal? Not really. In recent months, they had already embroidered (a bit too much) on the news that the Spanish champion was entered for the Qatar Grand Prix. Actually, it was more of a bureaucratic thing than anything else: Marc had simply been enrolled by the team as holder of the title, for which the possibility that he can race is contemplated.

But those who’ll be deciding are the doctors at the Ruben Internacional hospital in Madrid, exactly like last time. The same doctors who operated on his humerus, for the third and last time in December. Like we had already written, the doctors who have the last word, and the specialists, will only rely on the condition of their patient, without caring too much about the MotoGP calendar or how many races he  might possibly lose. After everything that happened the past few months, it’s all clear: if Marquez has no problem, he’ll race, otherwise he’ll wait.

To know what’ll happen on April 12th, we need a crystal ball. What is certain is that, after the two tests in Barcelona and Portimao on the RC213V-S, Marc stopped “showing off”  his training sessions and has keept a low profile. This doesn’t mean that Marquez is no longer on the bike, but that perhaps it’s not the time to fuel false hopes, neither for himself nor for his fans.

All in all, the first two GPs of the year weren’t so disastrous from Marquez’s point of view: at the top of the standings is Zarco – who’s not in an official team – with 40 points, while Vinales and Quartararo – tough guys on paper – have 36, and Mir, the reigning world champion, only 22 . Numbers within the reach of the “old” Marc, if he gets back in full shape, if he finds a Honda he likes, and if he can immediately pick up his  pace. Once again, the doubts outnumber the certainties, and there’s only one method to dispel them: seeing Marquez at the start up. That’s why April 12th is an important date for any self-respecting MotoGP fan.