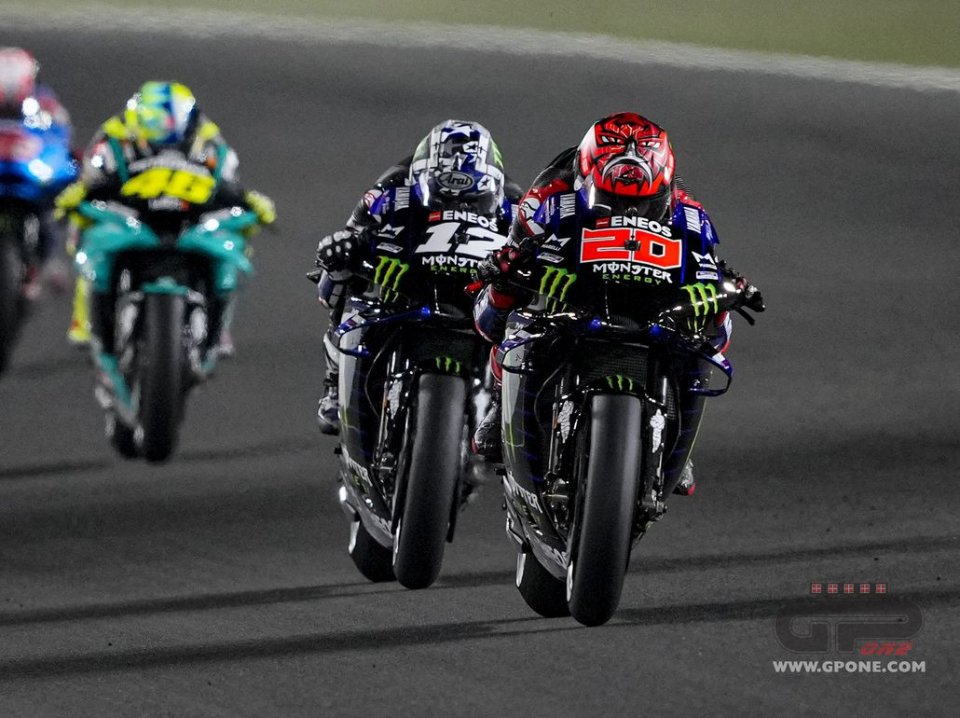 A Yamaha in perfect Doctor Jekyll and Mister Hyde style. The back to back rounds of Losail in fact showed the two faces of the tuning fork manufacturer, with the factory M1s victorious, while those of the independent Petronas team were forced to chase.

Vinales and Quartararo in fact exchanged the baton, while Rossi and Morbidelli had to deal with two weekends characterized by suffering and difficulties, which kept them well away from scrapping with the best. And to think that their expectations were very different, instead the stopwatch relegated them to the role of paying spectators.

The second round of Doha amplified the gap between El Diablo and the Doctor, with the Frenchman winning, while the nine-time world champion had to console himself with sixteenth place, more than 14 seconds from the top.

With this in mind, we wanted to analyse in detail the race pace of Fabio and Valentino, from which interesting details emerge. The first fact is that during the race, Quartararo never once went above 1m55s, something Rossi who recorded two laps in 1m56s, did not manage.

Beyond this aspect, the race of the two was the polar opposite. Fabio always remained in the top ten group, while Rossi (also due to a disastrous qualifying) immediately found himself at the bottom of the group, in around 20th place, having to deal with the KTMs of Petrucci and Lecuona, the latter who then abandoned the scene.

The fact is that the Frenchman’s race was an intelligent one, but at the same time all-attack. In fact, in the early laps he was seen stably at a low 1m55s pace, while Valentino struggled to get under the 1m55s and a half barrier. Also interesting is what happened during the eighth lap where Fabio broke through the 1m55s barrier, setting his own record lap, unlike Rossi, whose fastest lap did not drop below 1m55.383s.

The interesting aspect then became the second half of the Grand Prix. It was precisely here that the difference between El Diablo and the Doctor was exponentially amplified. From the twelfth lap onwards, Fabio became a fully-fledged war machine, so much so that he constantly lapped in the low 1m55s. Among other things, the last five laps were impressive, where the Frenchman seemed to be competing in a qualifying session with times of 1m55.1s. This is something that Valentino failed to do, since he had to absorb a gap of almost eight to nine tenths per lap from the winner of the GP without being able to make it up again, let alone halve it. 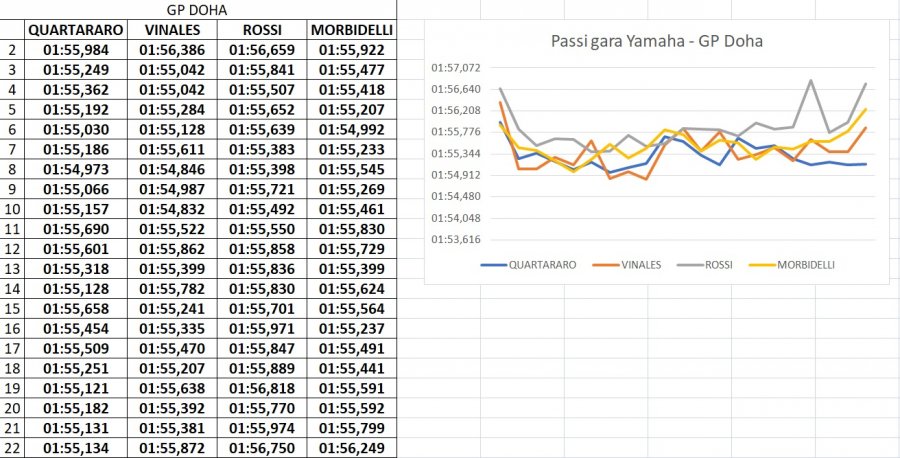 Turning instead to Vinales' performance, the Spaniard was quite in line with his teammate in the first part of the race, managing among other things to complete three laps under 1m55s, the best in 1m54.832s . Unfortunately, in the second phase, the music changed, since Top Gun turned out to be fluctuating, with performances ranging between low and high 1m55s, which weighed down like boulders on his ambitions to fight for the victory, to the point of ending up with a gap of more than two seconds from his teammate at the chequered flag.

While we're at it, to end the subject of Yamaha, let's also take a look at the race by Franco Morbidelli, who reached the finish line in 12th position less than six seconds from the top. What is there to say about the Petronas rider’s race? Unlike Valentino, the Italo-Brazilian could at least console himself by having achieved his fastest lap in 1m54.992s, thus managing to drop below 1m55s.

Apart from this aspect, Franco Morbidelli's race was a defensive one, where the goal was precisely to aim for the top ten. The world championship runner-up managed to lap at a low 1m55s in the first 10 laps, but then his pace started to drop. In the second phase of the race he reached the high 1m55s mark, afterwards he was no longer able to go below 1m55.5s, except on the twelfth lap. However, this was an illusion, since his pace then tended to rise, reaching the last lap even above 1m56s.

This is what the Doha GP told us. All that remains now is to wait for Portimao, confident in a response from Petronas…

Ah… one last thing. The week before in Losail, Maverick Vinales won, with the help of the strategy reused on the following Sunday by Fabio Quartararo. When Maverick triumphed seven days earlier, the track was slower due to the strong wind and the lap by lap timesheets are proof of this, so much so that he remained on the mid-high 1m55s mark.

The breakaway aspect linked to the group of chasing riders is also interesting. While Quartararo did the last six laps as if it were a qualifying session with times of 1m55.1s, Vinales saw his performance increase, so much so that he reached 1m55s high and then exceeded 1m56s. 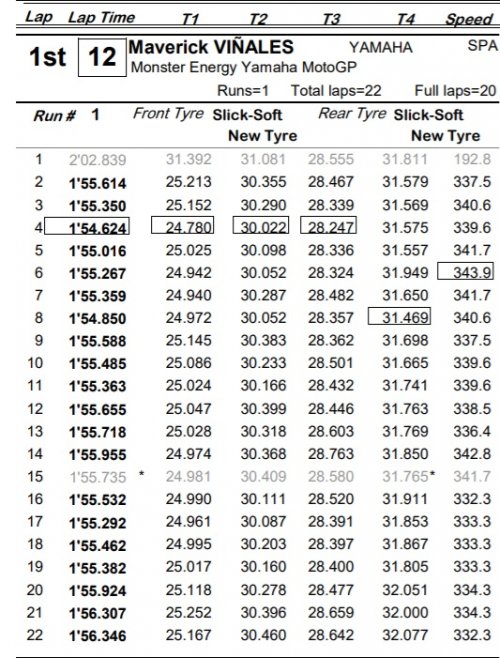 With the contribution of Andrea Rossi for the graphics.