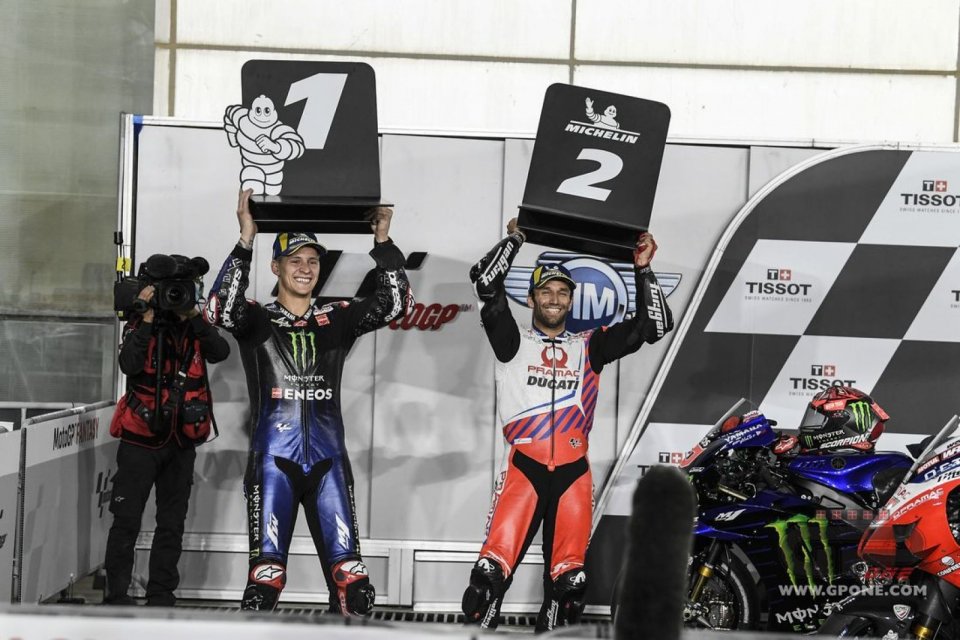 It was a memorable grand prix for Johann Zarco: another second place, always in amongst the fight at the front end of the race and championship leader at the end of the opening Qatar rounds of the season. Matured from every point of view, the Frenchman took home his second consecutive podium, confirming his now consolidated sensations aboard the Desmosedici.

"I am quite satisfied, before the race I knew that tyre management would be of vital importance - admitted Zarco - I managed to start perfectly from the front row, getting behind Martin. Jorge managed the race keeping an even faster pace than seven days ago. However I felt I had an excellent feeling with the bike, in fact I was able to manage both the tyres and my energy. I would have liked to win, unfortunately in the end I could do nothing against Quartararo's comeback, but I'm happy with the second place and the result in the name of our country".

For the first time in his career at the top of the MotoGP rankings, despite being still winless in the premier category, the two-time intermediate class champion proved to be by far the most consistent rider of the group. A double second place that translates into 40 points, four ahead of compatriot Quartararo and Vinales.

"We still need to improve, especially in terms of setup. The bike has the potential to have its say in every round, we'll see if we can then get the best out of it even on tracks with different characteristics, in this sense I am comforted by last year's results by Jack Miller in Valencia and Portimao ".

A new entry within Pramac Racing, the man from Cannes seems to have found a perfect place within the outfit headed by Paolo Campinoti, something that can be seen from his performance on the track.

"I find myself divinely with the team and the environment, at the moment everything is going the right way. The same goes for my teammate, Martin, there is respect between us and today he showed a lot of maturity riding in pure Moto2 style. In Pramac we have the same bike and the fact that we have less pressure also allows us to push to the maximum on any occasion", he concluded.