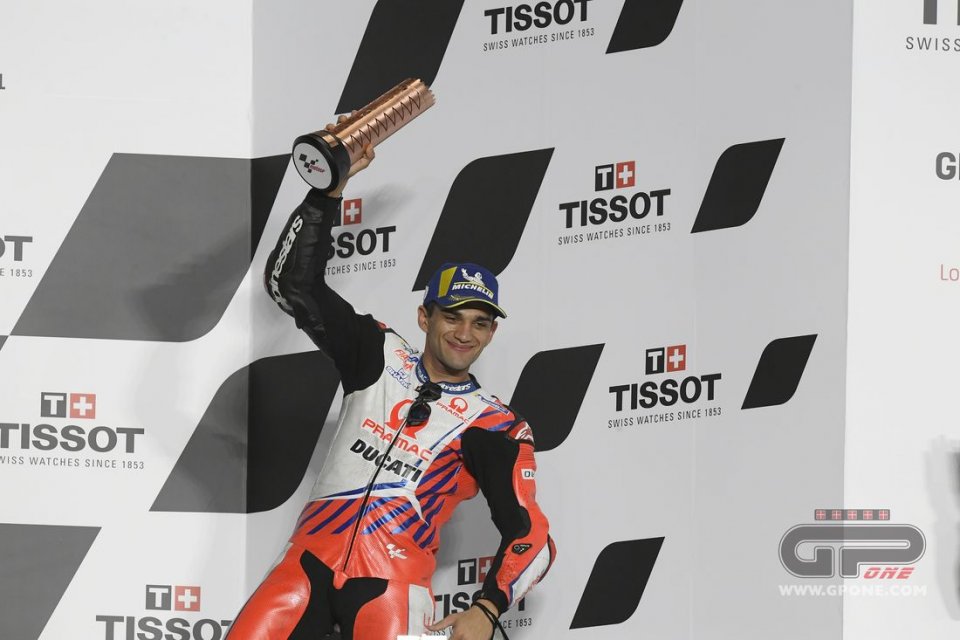 “I dedicate my podium to Fausto Gresini, because this is an important result for my career, and I know he’s watching me from up there. Jorge Martin will hardly forget this Sunday, April 3rd, since the Pramac team’s Spanish rider got his first podium in the top class in the second race in Losail.

What can we say? Hats off for what he demonstrated in Losail after his pole on Saturday.

“I’m really happy for about this race,” he  commented. “It’s a pity I lost the second place in the end, but I would’ve done anything for a podium in Qatar. I think I had an excellent weekend. First the pole, then the race, tackling everything with maturity.”

Jorge amazed everyone in Losail.
“I tried the Ducati for the first time just a month ago, and I’m really happy, given that such a result is something unique. At the start, I tried to manage my position and, when I was in command, I was fine, even if it was difficult to manage the tires and keep the right pace. But the bike is fantastic and, along with the team, we’ve made giant steps forward. I also have to say that I get along very well with Zarco, since there’s a good mood in the team.”

Then he talks about Johann.
“If Zarco hadn’t been at the last corner, I would’ve tried,” he said smiling.”But, in the end, that’s how it should be, since he’s the rider who has to aim for the title and, consequently, I preferred to turn off the throttle and not take risks. So that’s okay, even if, at a certain point in the race, I admit I thought about winning. Then, when Quartararo overtook me, I realized that I no longer had a chance.”

Jorge definitely will say good-bye to Qatar with no regrets.
“I have everything to win. I just need to ride the bike and gain experience. In the end, I lacked the speed to reach a victory, but I showed that I can manage the pace. I also think that there are no limits and more can be done, considering that I improved by twelve seconds compared to last week.”

His last comment is about the next race.
“It won’t be easy in Europe, because it’ll be my first time in the MotoGP and, consequently, I’ll have to learn and gain experience. So you’ll probably see me in the back. But I’m calm and confident, because we’re only at the beginning, and we have everything we need to do well. This year, I set myself some goals and, step by step, I’ve already managed to meet some. I know it won’t be an easy world championship, complicated situations will occur, but I’m not giving up.”