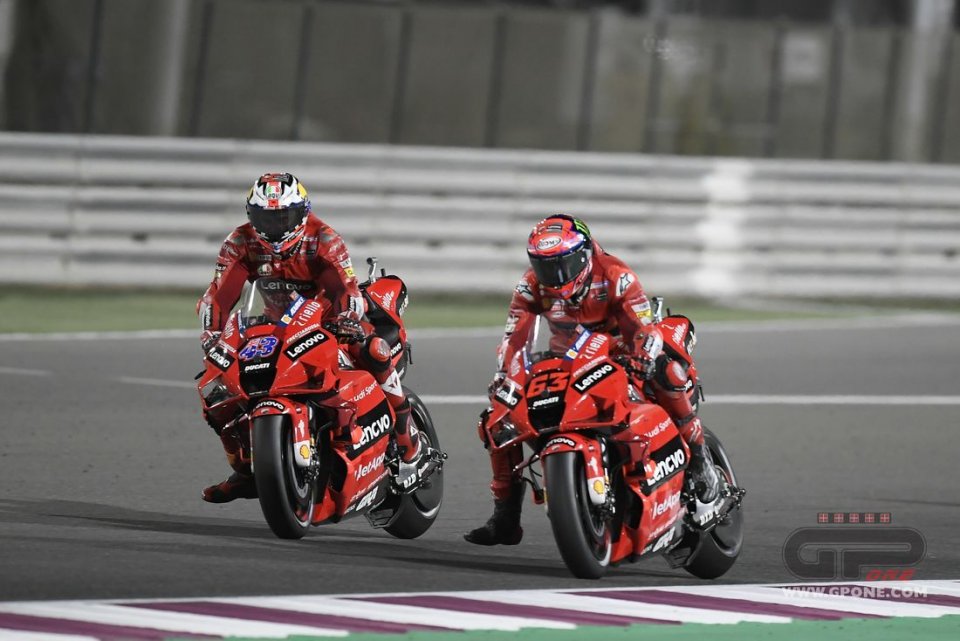 “How do I feel? Disappointed and angry with myself ”, Pecco Bagnaia doesn't mince words when commenting on a sixth place that did not go down well. After last Sunday’s strategic error, the Italian seemed to have learned his lesson and everything was going in the best possible way until, with 7 laps to go, he went long at Turn 1 thus shattering his hopes of a good result.

“Unfortunately the holeshot device didn't work well, I couldn't insert it - he declared - It's not easy to hook it up, especially when you have to stop at a precise point, like on the grid. Without that problem it would have been a different race for me, I would have tried to set my pace ”.

“Instead I found myself twelfth on the first lap, but I still had a great pace and was able to recover. I was able to manage the race well, right up to the error under braking at the first corner. I have to learn from what happened because it is not an acceptable mistake by a factory rider”.

Was your potential greater?

“When I found myself behind Zarco I started to manage the race thinking about the final part, I let the tyre breathe for 2 or 3 laps. Then Quartararo passed me, on the straight I found myself in the air tunnel created by Johann's bike and it was impossible to stop at the first corner. It was a serious mistake that cost me the podium. I had the pace to try to win, that's why I'm angry, the extra confidence I had also led me to make mistakes. It's not nice to have lost so many points ”.

Does this defeat hurt a lot?

“Last Sunday I was quite happy for the podium, it was my first race in the factory team, but not today. I was one of the fastest riders on the track together with Quartararo, on the last lap I lapped in 1’55.1, which was my best time of the previous race".

“I am disappointed and angry with myself, after the comeback I made an error of judgment in that braking zone, I did not consider the slipstream and unfortunately we were all close together, so I lost a lot of time. It also took me a long time to overtake Jack and I couldn't catch the other riders ”.

Isn't there any reason to see the glass half full?

“I’m feeling the blow, but I have understood a lot of things in these two weekends. In the end I am fourth in the championship and not too far from the first, it is too early to make hasty judgments. In terms of results, however, it did not go well, there is work to be done ".

Yamaha won the two races in Qatar, are you surprised?

“They worked a lot in winter and on this track they are very competitive, at the level of Ducati. We have a lot of power but they have more traction, so it was difficult for me to pass them on the straight. I would say it was a balanced situation ”.

Watch the video below with Bagnaia's declarations.