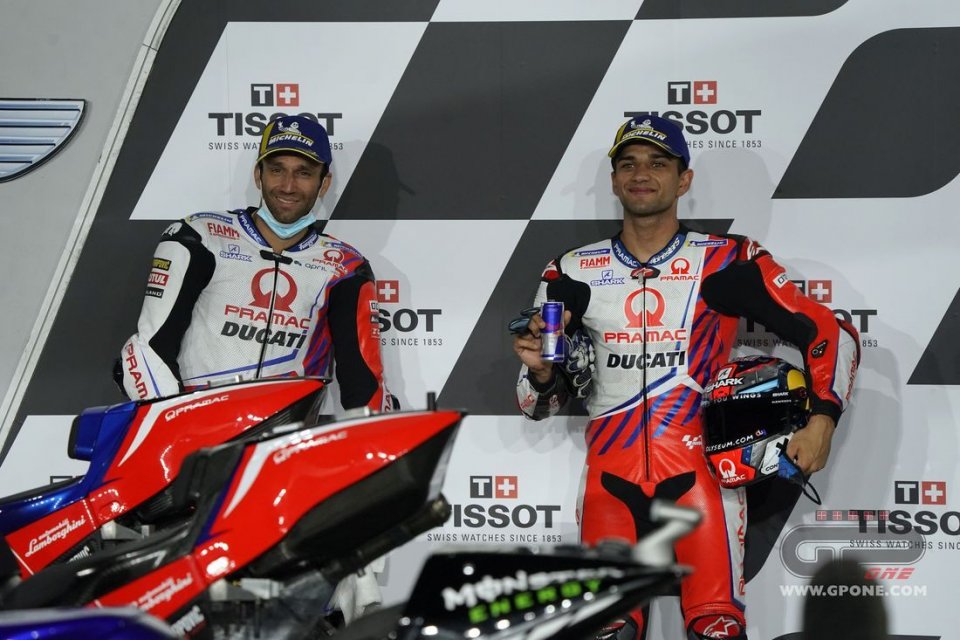 Jorge Martin has qualified on pole position for the first time in MotoGP, becoming the first rookie to qualify on pole on his second MotoGP race since Marc Marquez in Austin in 2013.

With Oliveira in Portugal last year, Bagnaia last weekend and now Martin, this is the first time there are threedifferent riders who take their maiden polein the classin three successive races since 2006 with Casey Stoner (Qatar), Chris Vermeulen (Turkey) and Dani Pedrosa (China).

Johann Zarco has qualified second for his best qualifying since he was on pole last year at the Czech GP. He will be aiming to take apodium for the first time in back-to-back races since Malaysia and Valencia in 2017.

With Martin and Zarco, this is the first Ducati 1-2 in qualifying since the 2018 Aragon GP with Jorge Lorenzo on pole ahead of Andrea Dovizioso.

Winner last weekend, Maverick Viñales has qualified third for the second successive time and will be aiming to win in back-to-back races for the first time since Qatar and Argentina2017, his first two races with Yamaha.

Jack Miller, who finished ninth last weekend,isfourth, equallinghis best qualifying at the track in MotoGP from 2019.

Fabio Quartararo has qualified fifth as the secondYamaha, which is his third successive time he starts from the front two rows. He will be aiming to stand on the podium for the first time since his win in Catalunya lastyear.

Polesitter last weekend, Francesco Bagnaia has qualified sixth and will be aiming to stand on the podium for the first time in back-to-back MotoGP races.

Aleix Espargaro has qualified seventh, which is the best qualifying result of an Aprilia rider at Losail so far in MotoGP. He will be aiming to give Aprilia their first top five finish since the introduction of MotoGP in 2002.

Alex Rins qualified eight for his best qualifying since he was second at the European GP last year. He will be aiming to give Suzuki their first podium finish in MotoGP in Losail.

2020 MotoGP World Champion Joan Mir passed to Q1 for the 13thtime in MotoGP  and managed to join Q2 for the fourthtime along with Catalunya and San Marino in 2019, and Qatar last weekend.He qualified in ninthfor his best qualifying since he was fifth at the European GP on his way to takinghis only MotoGP win so far.

Stefan Bradl qualified 11t has the highest-placed Honda rider. This is the second time there is no Honda rider within the top ten in qualifying in MotoGP in Losail along with last weekend.

After passing through Q1, Miguel Oliveira hasqualified 12th, which is the best qualifying result of a KTM rider at Losail.

Fourth on the grid last weekend, Valentino Rossi has qualified 21st, which is his worst qualifying result since he started his GP career at the Malaysian GP in 125cc 25 years ago.