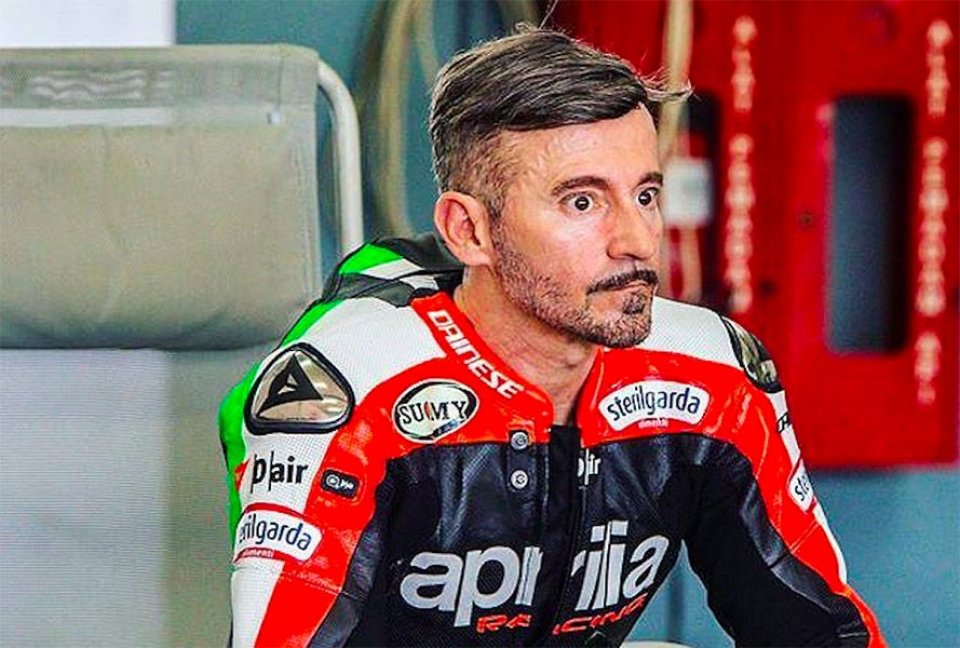 Yesterday's traditional episode of Bar Sport was quickly transformed into a lounge bar with a series of illustrious guests. Keeping the company of Paolo Scalera and Carlo Pernat was first Francesco Guidotti, manager of the Pramac Team which today monopolizes the first two positions on the grid with Martin and Zarco, and then Max Biaggi.

It was precisely with Max that it was possible to have a long and interesting chat, talking about numerous different topics and for each of these Biaggi offered – as usual – some strong and very personal points of view. With the six-time Aprilia world champion, we talked about Dovizioso and also about the past, with several very funny episodes. You can see the full video HERE, while this is an excerpt from a nice interview that was absolutely unscheduled and which we were really pleased to be able to do.

Max, but you're almost 50 years old. Can you explain to us why you still have so much desire to ride a motorcycle?

"It's simple! I have fun on the bike, I've been on the track all my life and I don't want to lose my healthy habits. Even footballers who have been in Serie A continue to play when they stop, but in a different way. I obviously ride on road bikes and not on a prototype or an SBK, so the limits are different. Then I don't have the slightest intention of ​​going racing or anything else, competition is no longer in my head. Of course I don't go slow, because on a track like Mugello I can also lap in 1:51, which is not bad. The bikes I use don't have prototype tyres, they have different lean angles, you have to brake differently. In short, everything changes, the limit is different but it’s enough to have fun ".

According to Pernat, you would have been the perfect test rider for Aprilia in MotoGP. What do you think?

"Aprilia also needs to agree! To my knowledge, they still don't have a real test rider in Aprilia, because Smith hasn't signed. Now they will try Dovizioso and I am very pleased, even in the past I indicated him as the best choice for Aprilia. He has finished second in the world championship three times, has raced for many years with Ducati and knows a lot of things. Even if he comes and is at 80% of his potential, it will still be a breath of fresh air and in other circumstances we would never have expected to have him on board in Noale ".

Biaggi: "They asked me to test the Aprilia RS-GP, but I prefer to have fun with the RSV4-X"

But did you come close to trying the RS-GP?

"I'll tell you a little gem: I was asked to try the RS-GP, and at that moment I said that I preferred to have fun with the Aprilia X".

How do you see Aprilia this year? It is going strong with Aleix Espargarò…

"I see tremendous improvement in Aprilia. There has been a step forward compared to 2020, in my opinion only a bit of power is lacking. Then you need a rider who can manage the race well. In my opinion, the RS-GP is missing just a little more power. I think Dovizioso as a test rider would be a very cool thing, there is no one around him like him. "

Today the Pramac Ducatis impressed. What do you think they found different from the factory bikes?

"The bikes that Pramac is using this year are the factory 2020 bikes, a very tried and tested bike. The ones that Bagnaia and Miller are using are the very advanced 2021s and maybe they still have to work on them a little bit. Maybe this affects the performance of the two official riders."

Instead, how are things in your Max Racing Team?

"We started a bit so-so. In the first race Fenati picked up two long lap penalties, otherwise he could have fought for the win. This time he had a good pace, but he was penalized together with that group of seven riders and basically starts from Doha airport!”

Don't you see any solutions to this Moto3 qualifying problem?

"We have talked a thousand times between us teams and we are well prepared for a Superpole lap, as we once did in SBK. In any case, if you have experience, you do the lap time anyway. Instead today it happens that some riders manage to qualify very well and then they get lost in the race, because they don't have the pace of the best. It's okay for the show, but you also compromise those who invest and as a team they have hired riders to get results. Maybe a rookie arrives who crashes and takes down a rider injuring him. Before it was different, you had to go fast in the national championships, then in the European and only then could you get to the world championship. Now there are riders who you don’t know where they come from, who have never achieved any results and who race together with riders who have a history ".

Another rider also has a team and we are obviously talking about Rossi. How are the relations between you today?

"I no longer have any grudges towards Valentino and if we cross paths, we say hello without any problems. Over the years everything changes. Look at Loris Capirossi, I'm not saying now that we are buddies, but everything has changed ".

You were singled out as being a bit unlikeable, but you were actually the first rider to really take advantage of TV and marketing.

"When you are a rider you are focussed. Even Marquez when he is on the grid looks straight ahead, as if he does not consider anything or anyone, but he thinks about much more important things than the people who pass around him, those are important moments. Today marketing is worth much more than talent. Pernat was the king of marketing in my time! In the ‘90s there was a good group with Aprilia and it was a good thing for me to be a rider from Rome. It was an advantage, because there weren’t any and this opened up a highway for me. I was quick to surround myself with people who took me to heart. Then after Agostini it was a nice story to tell, there was also the Italian industry that was doing great ".