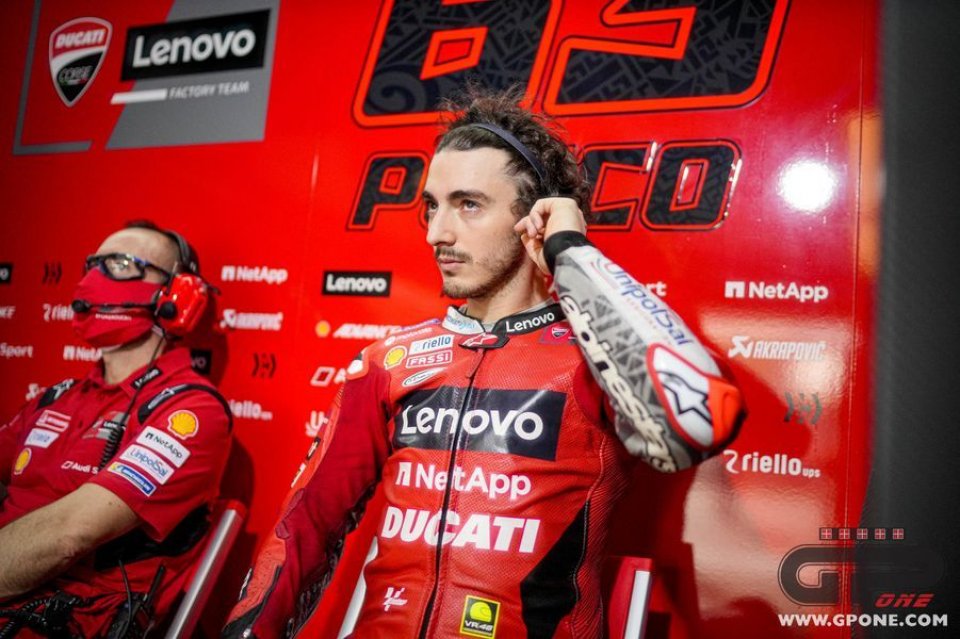 A qualification a little below expectations for Pecco Bagnaia who, after his pole position seven days ago, closed the second Saturday in Losail in 6th place, just over half a second from the top, occupied by another Ducati, Jorge Martin’s. The Spanish rookie got the best lap of the day in his second top class race, proving the Pramac team’s strength and the help that a satellite team can give a manufacturer, in this case, Ducati. Several times in recent years, the riders on the Campinoti team have beaten their brand mates on the factory team. Even Bagnaia was faster than Petrucci and Dovizioso in some circumstances.

“They were really good today in Pramac,” Bagnaia said. “Having a satellite team with two factory bikes is an advantage for development, especially if you have two great riders. In any case, we’re talking about only one qualifying, done on a track where I got a pole position last weekend. But Ducati needs a team like Pramac.”

Jorge Martin was the poleman. Were you surprised by his speed? Could he be in the game for the win?
“He has certainly improved a lot these days. He’s always been strong and has done a great job. But I think it’s too early to put him in the fight for victory. He needs experience.”

How do you rate your qualifications?
“Not entirely positive, because it was difficult for me to manage the rear today. I made mistakes and understand why, since we’ll often end up in this situation with the tire. But starting sixth could also be better because having someone up front to follow can help.”

What kind if race could yours be?
“My pace today was very good. Only Zarco did better with the same tire situation as mine. There are two possibilities: either stay in the slipstream like Johann did last week, managing the tires and not having aerodynamic resistance or, if I end up up front, I think I’ll be ready. Last week I learned a good lesson.”

Your most dangerous opponents? Your goals?
“The Yamahas will be strong like last week, but they did the FP4 with new tires. My goal will be to fight for the top five positions and, if I finish 5th, but with the chance to fight for the podium, I won’t be happy.”

Miller: “An unpredictable GP awaits us”

His teammate, Jack Miller – who finished qualifying in 4th with a delay of 197 thousandths from Martin – did better than Bagnaia. The Australian rider will have to flex his muscles tomorrow to recup last week’s one race, which didn't live up his expectations.

“The track conditions this evening were not optimal, and I was unable to take advantage of the fast lap. Despite this, I’m satisfied with a fourth time in qualifying. Last week in the race, I had  a great start  recuperating several positions immediately, so I think I can repeat myself tomorrow too. It’ls going to be an unpredictable GP. We’ll have to be patient at the beginning, to then figure out how to face the rest of the race. I have my own strategy, and tomorrow we’ll find out if it’ll work!”