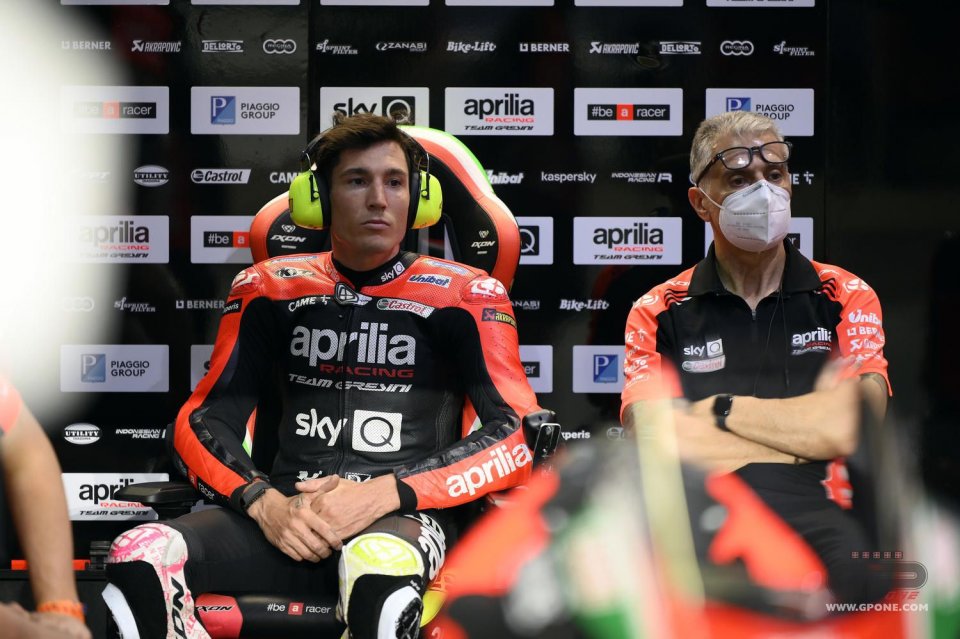 In 2020, a tenth place would have been a result to be celebrated for Aleix Espargarò. Today, however, the Spaniard came to the debrief with the journalists rather disappointed for this top ten position achieved in Losail, which came about after he had fought tooth and nail for most of the race for the top five. The disappointment on Espargarò's face represents better than anything else the measure of Aprilia's growth in 2021. With a bike that has taken a clear step forward, the goal is to always finish in amongst the top positions and even a tenth place today represents a bit of a disappointment.

The Noale technicians now have to find a way to make a step forward in top speed, the only Achilles heel of a bike that appears to be rivalling the best on the grid from all other points of view.

"I think I did a good job, I really put all my effort into it - said Espargarò - but as you can see on TV, I was losing a lot of ground on the straight and it was difficult to maintain my position. The bike works very well, it also makes the tyres work well, but this year on the straight is really difficult because every lap I lost a few positions from the middle of the race onwards and afterwards I had to push hard to recover. I tried to pass Zarco a couple of times and also Fabio Quartararo, but then I lost on the straight and they passed me again. It was difficult to fight with them, in the last part of the race when the Ducati riders suffered a tyre drop I felt I had more grip than them but there was no way to pass them, honestly today I think that I deserved something more than tenth place ".

The RS-GP is already very strong, do you think Dovizioso can find the motivation to return to racing this year?

"I think I have shown that I am a top rider and I think what I tell the engineers is enough to improve the bike. Using my comments from last season, we did a great job on the new bike. They know what we are missing, not to fight for the top ten, but to fight for the podium. They know it perfectly well, they are working in Noale and we all hope to receive new parts around Mugello and I don't think having a fast teammate can change anything from this point of view " .

A.Espargarò: "I don't need a fast teammate, I'm motivated enough as it is"

Don't you think you can find more motivation by having a teammate as fast as you?

"There are different types of riders. There are riders who always want to have a fast teammate, because a fast teammate obviously pushes you to give something more and helps you develop the bike, but I'm super motivated and I don't feel the need to have someone by my side to find the motivation, I do it on my own ".

Is the problem at this point only the top speed?

"In the last few laps I tried to pass Mir, Miller. I really tried in every way, but as soon as I got onto the straight they all passed me. I don't think I had a bad race, but I really think I did the best possible result this weekend".

Even with the tyres things went well, how does the RS-GP treat them?

"I had no problems with the tyres, I felt really good even compared to the last grand prix. We had changed the set-up of the bike a little and I think this made us take a clear step forward at the start of the race. Then for the second part of the race, the problem is that those in front of me started to lose ground and I thought it was easy to overtake them. Instead it was impossible to do so ".

Losail is perhaps not the best track for this bike with its straight. Do you think things will be different in Portimao?

"I am sure that when we get to other tracks we will be able to fight for the podium. The step forward we have made compared to last season is incredible. I did not lose ground anywhere on the track, except on the straight. In some passages between 5th and 6th gear I even lost 20 km/h and this makes everything really difficult. At least on a track like this it is almost impossible to fight, while on tracks like Portimao and Jerez I think we will have some good races. I'm a bit disappointed because I think that we lost a good opportunity here in Qatar, but in any case I'm eighth in the championship and now I can't wait to go to Portimao. "

"I can't wait to leave Qatar. I really enjoy being here, I come every year with my family. I like the atmosphere and also the track. But what we have done here is out of this world. I totally accept it. because obviously there is a pandemic and so that's okay, Dorna did a fantastic job. But doing two tests in a row and then two races ... I can't wait to get away from here and finally try the bike in Portimao. I can't wait to try the RS-GP on other tracks. I think that on tracks with long straights, we still have some work to do. But in Europe, where the tracks aren't like that, I think we'll fight with the best. "

Rossi: “Silverstone is one of my favorite tracks, I’m fast there”

Fast by Prosecco Austria, Pernat: "Ducati has not collected as much as...