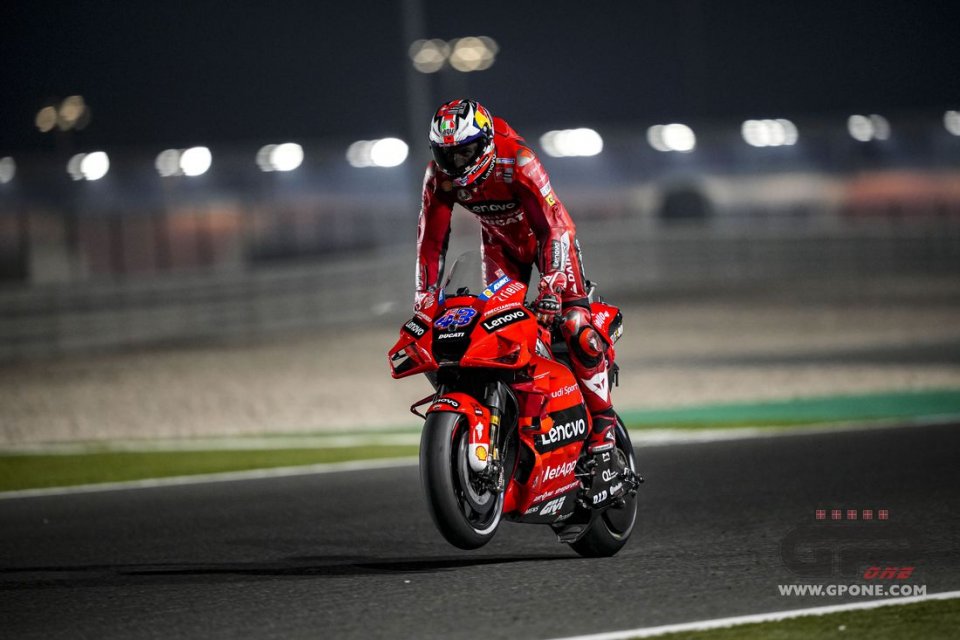 If anyone still had doubts about the Ducati's performance on the flying lap, FP2 swept them away completely. The Reds were close to scoring a full house but had to settle, so to speak, for a hat-trick with Miller, Bagnaia and Zarco, then the intruder Quartararo, and Martin in 5th place. Once again, tomorrow, the Desmosedici will be the bikes to beat in qualifying, but for the moment Ducati fans can sleep peacefully.

Above all Jack, who with a time of 1’53.145 trimmed more than 3 tenths of a second off the time of his closest rival, teammate Bagnaia. However, there was a bit of a scare for the Australian, who was almost thrown off his Ducati.

“I’m fine from the moment, I have nothing really to say. It is one of those things when you’re pushing. Better a moment than a crash. Everybody keeps asking if I hit myself, but I didn’t. The family jewels are safe and sound!", he joked.

Apart from that scare, everything went in the right direction and now he just has to think about avoiding the tyre problems he had last Sunday.

"They can always happen again, but I don't think I'll have them again - he said confidently - Today the grip was a bit different than last week, but I felt better, I was able to ride like in the tests. Doing a good lap in qualifying isn't too important considering how the Ducati starts, but I'll try ”.

Another question was about a possible team game between him and Bagnaia.

“We have a good relationship, we work well together - explained Jack - But in the race every rider thinks of himself, we don't talk about strategies between us”.

Zarco: "I didn't take the step forward I expected". Martin: "I'm not surprised I'm so fast"

While Miller is thinking about the podium, Zarco would like to improve the second place of the first GP. Pramac's Frenchman proved to be fast on the flying lap once again, but this time the problem is the pace.

“It was a hard day - Johann admitted - I have to be happy for my time, but not for the work done. This morning it was very hot, I crashed and lost time. In FP2 the conditions were better, there was no wind, but for me the temperatures were still too high. So I was unable to do consistent work, to take that step forward that I expected ”.

Unlike his teammate, the rookie Martin was satisfied. The Spaniard amazed with 5th time, already in line with the best Ducati riders despite being only in his second race weekend.

"After the first race I had time to study and I improved as soon as I got on the track - said Jorge - I was able to lap in 1'54" on my own, so I knew I could go in 1'53" following someone and I succeeded. When they tell me if I expected it, I didn't know what to expect. I only got on the bike a few weeks ago, but it's clear to me that if I want to improve I'm in the right place. My goal was to finish in the top 10 to get into Q2, but I definitely didn't expect a FP2 like today.”

"I also tried to work on the pace - he continued - My goal for the next race will be to make fewer mistakes and be consistent, I don't think too much about the final position".

Martin, however, is also aware of his potential: "A podium this year? I'll think about it starting in the second half of the season, not now. However, I'm not surprised to be where I am, we have seen riders like Bagnaia and Quartararo very fast and I don't feel inferior to them ”.

Biaggi “beyond the sound barrier”: over 455 km/h on the electric Voxan