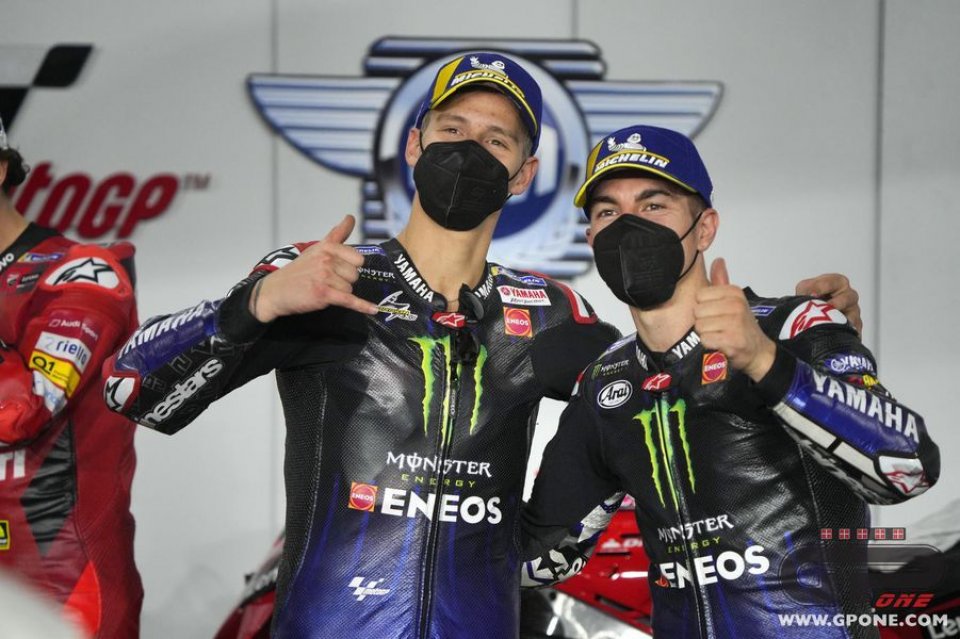 It was a relatively difficult day for the winner of last weekend's race if we were to focus only on the standings. But actually Friday in Losail 2 gave Maverick Vinales a confidence boost judging by the pace shown in FP2 and the times set with medium tyres.

“Today I felt great, just like last Saturday's FP4. I did some fantastic times on the medium tyre and even if I won't use that tyre for the race it's still good because I know that on the soft tyre I can be even faster ”.

What happened in your time attack?

“I went out on the track with a preheated tyre from last week and I didn't feel good at all. That type of tyre doesn’t guarantee the same performance and it was a bit of a problem in all parts of the circuit. I thought it would be difficult to get into Q2 because the bike was sliding a lot but I did it and I'm very happy. "

A lot of riders complained about the track conditions. What do you think about that? Are your goals the same tomorrow even if the weather changes?

"Frankly, I felt good today, there was good grip. Tomorrow it will be important to push hard in qualifying to be able to start from the front row ”.

Could a little wind help you by slowing down the Ducatis?

"You never know, Sunday was windy but there were two Ducatis on the podium. We have to think about ourselves ”.

On the other side of the Yamaha garage, Frenchman Quartararo is trying to reduce the gap seen last weekend between him and his teammate and today, as mentioned, he finished in fourth position as the best "non-Ducati" bike of the group . How did it go?

“The track conditions have got worse from  last week and I didn't feel good today. I struggled to stop the bike and the strong point of the Yamaha, cornering speed, seemed not to be there. Tomorrow there should be better conditions to do a fast lap”.

In FP2 you used medium tyres, no one else did. Why this choice?

“I needed to save tyres for the race but honestly that tyre was a disaster. My bike hasn't changed since last weekend ”.

For the rest of the weekend, fingers crossed to get some wind?

“It would certainly be good for us, or rather, it would be worse for the Ducatis. Having the wind in your face on the straight will obviously affect their aerodynamics ”.

Mir said he used a tyre that was in last week's allocation and, therefore, already preheated. Did you do that too?

“I don’t think so, we don't use those tyres because they suffer too many temperature changes”.